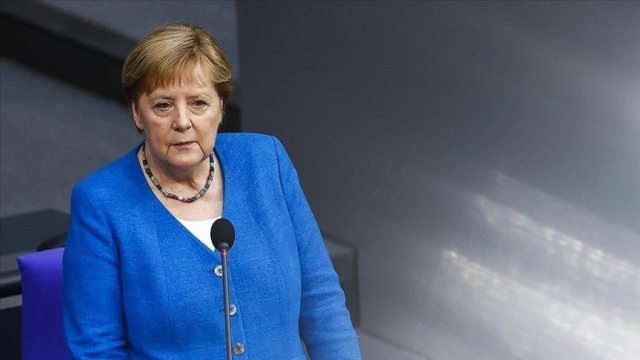 Former German Chancellor Angela Merkel criticized her own government's defense policy and called for a negotiated solution to the war in Ukraine.

In an interview published by Die Zeit newspaper, Merkel said that the war in Ukraine "one day" will end with negotiations. The former chancellor did not want to specify the conditions under which she would welcome a peace agreement, but rejected a "dictatorship peace".

Merkel also said that despite NATO commitments, it had not been possible for Berlin to invest the targeted 2% of GDP in the armed forces - something that has drawn repeated, sharp criticism from former US President Donald Trump. "We did not do enough for deterrence by increasing defense spending," Merkel said.

She admitted that Germany "should have reacted more quickly to Russia's aggressiveness", and added that while her conservative CDU/CSU bloc was the only group to include the NATO goal in its government program, she herself also “doesn’t make a fiery speech about it every day."

However, Merkel did not want to distance herself from other policies, despite months of criticism. For example, she defended the decision to continue construction of the Nord Stream 2 gas pipeline from Russia to Germany, which her successor as chancellor, Olaf Scholz, ultimately decided to halt days before Russia's full-scale invasion of Ukraine began in February.

Merkel said that Ukraine was also very keen to remain a transit country for Russian gas. A decision not to move forward with the pipeline, combined with the Minsk peace accord, would have "dangerously worsened" the climate with Russia, she added.

Germany's energy dependence on Russia is due to less gas from the Netherlands and the United Kingdom, as well as limited production in Norway, she added. "A decision would have had to be made to buy more expensive [liquefied natural gas] from Qatar or Saudi Arabia, as the US was only available later as an exporting country," Merkel said.

Merkel said a step in that direction would significantly worsen Berlin's competitiveness.