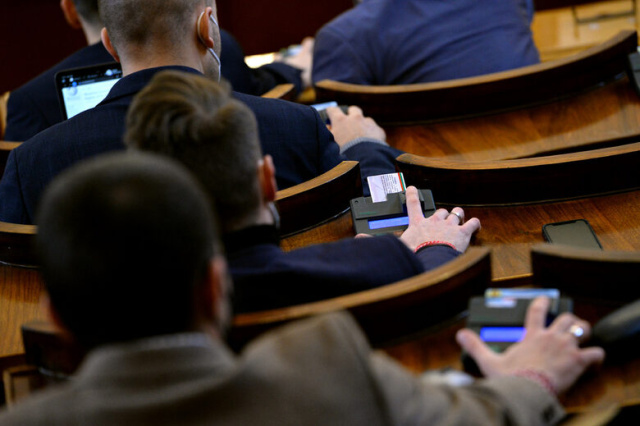 The National Assembly accepted in the first reading that there should be a reform of the anti-corruption legislation. However, what exactly it will look like at the end is not yet known, since two draft laws were adopted - one proposed by the MPs from "We Continue the Change" and the second - introduced by the Council of Ministers and prepared by the team of the Acting Minister of Justice Krum Zarkov. The two bills differ, but the MPs announced in principle support for reform of the Anti-Corruption Commission.

The project of "We Continue the Change" received a larger majority, which was voted with 138 votes "in favor", 31 "against" and 14 "abstentions". The bill of the Council of Ministers gathered support from 113 deputies who voted "in favor", 3 were "against", and 95 "abstained".

Acting Minister of Justice Krum Zarkov presented the bill submitted by the Council of Ministers and explained the differences with that of "We Continue the Change". The draft submitted by Krum Zarkov provides for the commission to be divided into two - for countering corruption and for confiscation of illegally acquired property. The same division is provided for in the "We Continue the Change" law, which has expired from the last parliament, and which has been re-introduced and will be debated on November 2. In both legislative proposals, it is assumed that the anti-corruption commission will have investigative functions.

Zarkov's concept, however, includes the body consisting of five people - two elected by the parliament, one each elected by the general meetings of the supreme administrative court and the supreme court of cassation, and one appointed by the president. According to Zarkov, this should ensure an equal distance of the body from the institutions and ensure the participation of professionals in it.

Zarkov explained to the deputies that the two draft laws share a common philosophy and goal, with the common goal being that the anti-corruption body is expected to have investigative functions and the ability to challenge decisions of the prosecutor's office not to initiate investigations. In addition, according to Zarkov, the reform will put the monopolistic decisions of the prosecutor's office under judicial control. In the draft law of the Council of Ministers, it is envisaged that this body will deal only with investigations against corruption and analytical activities.

"A very important, but very different, conflict of interest proceeding. For this commission to be effective, it must be focused - on a certain group of individuals and on a certain type of crime. What has happened in recent years should give us is for a lesson and not to repeat the mistakes. This mechanical collection of different philosophically different productions in one body is ineffective. The second big group of changes is related to political independence - we need to get out of the spiral in which these bodies are blamed or beaten, or in an umbrella," commented Zarkov.

The co-chairman of "We Continue the Change" Kiril Petkov recalled that this bill is an important condition for Bulgaria's admission to Schengen and that it is part of the recovery and sustainability plan, according to which Bulgaria has made commitments on which European payments depend.

"We have respect for Minister Zarkov. We believe that no one is above the law. And we believe that both the Prime Minister, the Prosecutor General and the President should be within his scope. We believe that the most democratic way is for the Parliament to select the members of the new commission. We do not approve the selection of members from many institutions, because we may witness a blockage, as we are currently seeing with the SJC and even the CEM," Petkov believes. According to him, the head of state should not have the right to make proposals for members of the Anti-Corruption Commission, since the institution has nothing to do with the fight against corruption.

During the debate, Milen Mateev from "We Continue the Change" explained that his colleagues from the parliamentary group do not agree with limiting the personal scope of the persons to be investigated, and pointed out that this should happen at all levels, at which has corruption.

Raya Nazaryan from GERB-SDS announced that the group's position is in principle to support both bills, but warned that some shortcomings should be removed between the first and second reading. According to her, one of the shortcomings in the proposal of the Council of Ministers is that the members of the anti-corruption body should be elected acting judges from the SupremeAdministrative Court and Supreme Court of Cassation. According to her, the court is an independent body, the functions of judges are expressly stated in the Judiciary Act, and the appointment of judges to a body that deals with the investigation of crimes creates grounds for impeachment of impartiality and may lead to the impeachment of the entire court, when the case reaches the third instance.

Yordan Tsonev from DPS announced that the movement supports the two bills both in the legal affairs committee and in the plenary hall. However, he raised objections and criticism after recalling the history of the creation of anti-corruption bodies in Bulgaria.

"Life does not start from 2021. The creation of one body is no guarantee that we will fight corruption. Especially if it smacks of bypassing other bodies, smacks of circumventing constitutional principles. Don't have that enthusiasm. The fight against corruption wants not only to have organs, but also other things - prevention, including in the legislation," comments Tsonev.

The Chairman of the Committee on Legal Affairs in the Parliament and deputy from GERB, Radomir Cholakov, made another comment related to the recovery and sustainability plan. He considers it very humiliating for a sovereign state to subject its legislation to "taking some money", especially since the money is not that much.

"Even more so if he risks breaking his institutional system. Maybe it's better sometimes to give up some money and show dignity and character," thinks Cholakov. According to him, all the necessary decisions are contained in the Constitution, which, however, is not read or understood.

"We should not adopt a law to take some money. We should adopt the law to stop some people from taking some money," answered Minister Krum Zarkov.

Deputies from "Vazrazhdane" were also against the changes in the legislation related to the Anti-Corruption Commission. According to Tsveta Rangelova, these bills were written "hastily, mechanically, on the knee" and it remained unclear what the division of one body into two necessitates, given that until recently the rulers were proud of its work.

Kostadin Kostadinov commented ironically that a serious turning point in the fight against corruption would occur in Bulgaria if another body was created. "Efforts in the fight against the corruption factor, which represents the most serious risk for Bulgaria's national security, will be diluted even more", believes the leader of "Vazrazhdane".

According to Branimir Balachev (GERB-SDS), the Council of Ministers proposed "sugarcoated things", how the body will be equally distant from all institutions and independent, and declared that this law is incorrect, it will not contribute anything to the fight against corruption. "If we, the Bulgarians, do not stop talking about this corruption, that we are corrupt, we will not have a good start in the EU," commented Balachev.

His words gave Asen Vassilev from "We Continue the Change" a reason to react and announce that corruption cannot be "swept under the carpet" and people should close their eyes to its existence, because every time we go out into the street "it hits us in the face" with various manifestations such as repair of repair, for example, poor-quality roads on which Bulgarian citizens die, etc.

Nadezhda Yordanova from "Democratic Bulgaria" announced her principled support for the need for such legislation, recalling that currently the Anti-Corruption Commission collects a huge amount of information with special intelligence tools, but it is not known what it uses them for, since in their current form they cannot to serve before the court, as they were not collected under the Criminal Procedure Code.

That is why the investigative functions of the anti-corruption commission are also needed, Yordanova added. According to data presented by Yordanova, less than 10% of the activity of the Commission is currently related to countering corruption. She stressed that between first and second reading, the group would ask for amendments to ensure that the authority would not be turned into either a club or an umbrella.