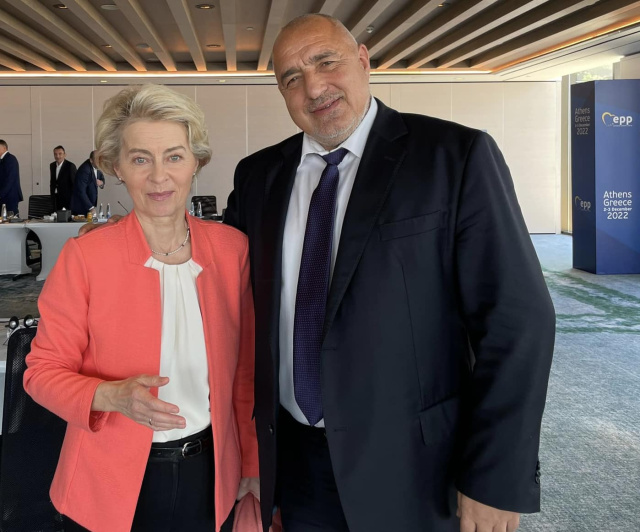 “The government that GERB will propose will be made up of experts who can stabilize Bulgaria”. This was stated by the leader of GERB, Boyko Borissov, in a conversation with the President of the European Commission, Ursula von der Leyen. The two talked during the meeting of the European People's Party in Athens.

"GERB will continue the dialogue with all parliamentary parties, because Bulgaria needs a cabinet that will speed up the work on the adoption of all laws under the Recovery and Sustainability Plan," wrote Borissov in a post on social networks dedicated to the meeting with Ursula von der Leyen.

On Monday, the GERB-SDS parliamentary group will receive from President Rumen Radev a mandate to form a government.

Yesterday, the deputy chairman of the party, Tomislav Donchev, commented that GERB will propose a draft cabinet to be voted on in the plenary hall, as it is likely to be a minority government.

The PG of GERB-SDS has 67 deputies from the 240-member parliament.

In a conversation with the President of the EP, Roberta Metsola, Borissov thanked that the European Parliament has once again supported Bulgaria on its way to Schengen.

The Netherlands decided to block the admission of Bulgaria into the Schengen area.

"I emphasized that it is inadmissible for our country to impose additional political conditions, after we have long since fulfilled all the criteria for membership," he added.

At the meeting in Athens, the leader of GERB also talked with Austrian Chancellor Karl Nehammer about migration flows and the protection of EU borders.

"The topic of migration flows to Europe is extremely difficult and finding working mechanisms to control it deserves the attention of all member states. Migration and the protection of the EU's external borders are not a national, but a common European issue," Borissov points out.