Day 282 of the Invasion of Ukraine: 13,000 Ukrainian Soldiers Died in the War, according to Zelensky's advisor 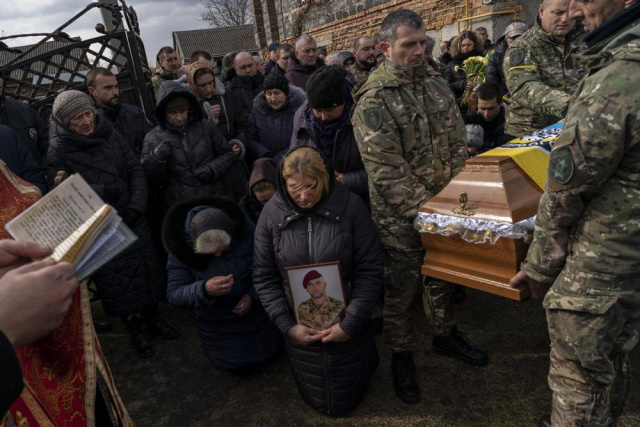 Under a condition: Biden to talk with Putin about Ukraine

US President Joe Biden has allowed talks with Vladimir Putin if it would end the war in Ukraine.

At a White House press conference after speaking with French President Emmanuel Macron, who is on a state visit to the United States, Biden, who has so far denied such an opportunity, said:

"Let me choose my words very carefully. I'm ready to talk to Mr. Putin if he actually has an interest in deciding that he's looking for a way to end the war. He hasn't done that yet."

Macron said he would continue to talk with the Russian president to "try to prevent escalation and get some very concrete results," such as the safety of nuclear plants.

The two leaders also looked for ways to ease some economic tensions in the Oval Office talks.

Biden promised Macron to make changes to US legislation passed by the US Congress this year to calm European fears that they could harm the EU economy.

At issue is the Inflation Reduction Act, which provides 0 billion in subsidies for US-made products that will make European exports and goods uncompetitive.

At a meeting on Wednesday with US lawmakers, Macron described the plan as "super aggressive" towards European companies, Reuters reports.

European leaders say the legislative package signed by Biden in August would be a major blow to the European economy, which is suffering from the effects of the war in Ukraine.

Six million Ukrainians are without electricity

Six million Ukrainians are without electricity. The mayor of Kyiv warned residents of the capital to stock up on warm clothes, food and water, due to the danger of a complete blackout in the city.

Vitali Klitschko called on his fellow citizens, if they have the opportunity, to move to smaller settlements near Kyiv, because the capital is expecting an extremely cold winter.

According to Ukrainian authorities, 40% of the country's energy infrastructure was destroyed in the Russian strikes.

Advisor to Zelensky: About 13,000 Ukrainian soldiers died in the war

Between 10,000 and 13,000 Ukrainian soldiers have died since the beginning of the Russian invasion. This was stated by Mykhailo Podolyak, adviser to Ukrainian President Volodymyr Zelensky.

Ukraine rarely releases casualty figures, and the senior official's comments to Ukrainian television have not been confirmed by the military. However, he also cited the Army General Staff.

Earlier this week, president of the European Commission Ursula von der Leyen “mistakenly” reported of 20,000 civilians and over 100,000 military personnel have been killed since the start of Russia’s invasion. Later, her statement was edited and there was no mention of such figures.

"Firstly, not two, but already three, and secondly, the letters are not with an explosive, but with another substance. I will not comment yet, we will soon come out with an official position on the subject. Let's put it this way: inside these envelopes there was a symbolic threat passed on to Ukraine. I can only say that all the envelopes were soaked in red liquid at the time of their receipt," Kuleba said on the air of the United Ukraine telethon.

Italy's government has approved arms supplies to Ukraine to continue

Italy's new government has issued a decree authorizing arms supplies to Ukraine to continue into 2023. The Italian parliament has 60 days to turn the decree into law.

Details of Italy's military supplies to Ukraine are classified, but last month a representative of the ruling coalition told Reuters that Rome was preparing a new supply, including air defense systems requested by Kyiv.

Italian media reported that the country will provide Ukraine with four "old generation" Aspide anti-aircraft missile systems with 18 missiles each, along with radars. Delivery is expected to take place in late December or early January next year.

There was a danger that the Lukoil-controlled ISAB refinery - one of the largest in Europe - would stop production due to the impending entry into force on December 5 of the European Union embargo on the import of Russian crude oil by sea.

The "temporary management" is planned for a maximum period of 12 months, the source specified. The government passed a decree in this direction.

"The emergency intervention aims to protect both a strategic national energy site and the employment levels that are so important for Sicily and for the whole country," Meloni said in a brief statement, without specifying the content of the decree.

By placing the refinery under state supervision, Rome is following the lead of Berlin, which in September took control of the German operations of Russian oil group Rosneft, which operates multiple refineries there.

The survival of the ISAB refinery is at stake, as it is forced to supply its oil entirely from Russia, given that before the war in Ukraine, the share of Russian oil was 10-15%. Fearing sanctions, European banks stopped financing the refinery and giving it the guarantees needed to import oil from other countries.

ISAB has the capacity to refine 10 million tons of crude oil per year, with the possibility that it can be increased to 14 million tons. It provides about 20% of the national needs.

This is a temporary solution to avoid "the blocking of machines and activities and subsequent disasters for employment", commented Renato Scifani, governor of the Sicily region, before the Council of Ministers.

"The decision to place the company under state supervision will make it possible to look for possible buyers, without necessarily ruling out the option of nationalization," he noted.