Day 281 of the Invasion of Ukraine: Battle for Bakhmut continues, Russia to expand Nuclear Weapons infrastructure in 2023 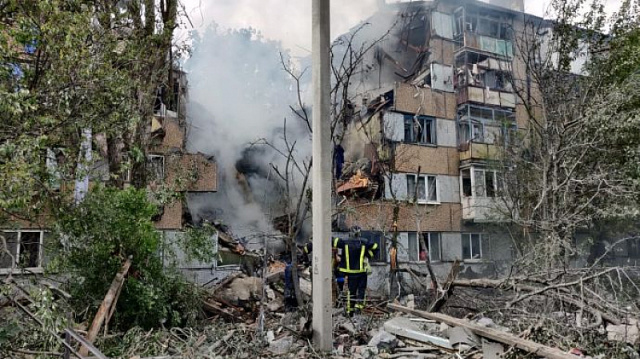 Kherson was left without power after heavy Russian shelling

Electricity in the recently liberated Ukrainian city of Kherson has been cut off after heavy shelling by Russian forces, the regional governor said on Thursday.

The governor of the Kherson region, Yaroslav Yanushevich, reported in "Telegram" that the city is again without power.

After the withdrawal of the Russian army from the city, the residents of Kherson are now under regular fire from the new Russian positions on the other bank of the Dnieper River.

The Ukrainian General Staff said in its daily briefing on the fighting that the number of Russian soldiers and military equipment had decreased in Oleshki, a town not far from Kherson on the Russian-controlled side of the Dnieper.

"Enemy troops were withdrawn from certain settlements in Kherson (region) and scattered in forest strips along the section of the Oleshki - Khola Pristan highway," the message said.

The highway runs parallel to the river in territory controlled by Russia. The Ukrainian military reports that the bulk of Russian forces are made up of mobilized civilians.

Satellite intelligence: Russia is preparing another massive strike against Ukraine from the Engels-2 airfield near Saratov

The Russian regime is massing bombers and cruise missiles at one of its air bases in preparation for another massive strike against Ukraine. This is shown by the latest satellite images from November 28, published and analyzed by the German "Spiegel".

The German publication analyzes satellite findings that show increased military activity at the Russian VKS Engels-2 air base near Saratov. Photos courtesy of Maxar Technologies and Planet Labs. The footage shows over 20 Tu-95 and Tu-160 long-range bombers. Also visible on the airfield plaques are ammunition crates and wheel loaders used to carry the X-55 and X-101 cruise missiles.

According to Arda Mevlütoğlu, a Turkish security and defense expert, "it is interesting that there are a large number of large transport aircraft at the airport, which suggests a recent delivery to the base, possibly of cruise missiles."

The photos are from November 28. "An intense attack with cruise missiles is expected," Mevlütoğlu said.

In recent weeks, attacks of this type have been Russia's new strategy against Ukraine. Using cruise missiles and kamikaze drones from Iran, the Russians are carrying out massive shelling of Ukrainian cities.

Targets of the attacks of the Russian army is the critical energy infrastructure. With attacks on infrastructure sites, the Kremlin seeks to terrorize the civilian population, cause interruptions in electricity and water supplies in increasingly cold temperatures.

Russia has run out of Iranian drones, according to Kyiv

Russia appears to have run out of Iranian drones that have been shelling Ukrainian cities and energy infrastructure for the past two months. This was reported by "Reuters" with reference to the spokesman of the Ukrainian Air Force Yuriy Ignat.

"We haven't seen these Iranian drones for about two weeks... the first batch is probably already over," he told the main Ukrainian television station.

Ukraine's air force says its air defenses have shot down 340 of about 400 Iranian drones fired by Russia since the start of the war.

In early November, Iran's foreign minister admitted that kamikaze drones had been delivered to Russia, but this was before the war began. It was later reported that Tehran also sent instructors to help the Russian military launch them, mainly from positions in Crimea.

Nearly 6 million Ukrainians are still without power after the latest airstrikes, the worst of which was last Wednesday.

Kyrylo Tymoshenko, deputy head of Ukraine's presidential administration, said electricity had been restored to up to 65 percent of consumers in Kherson, but Volodymyr Zelensky said in a video address Wednesday night that most Ukrainian regions, including Kyiv, still had power supply problems.

"We are analyzing the intentions of the occupiers and preparing countermeasures - tougher countermeasures than the current ones," President Volodymyr Zelensky said in his video address on Wednesday evening.

The General Staff of the Ukrainian Army reports that heavy fighting continues in eastern Ukraine, where Russian forces are trying to advance in the Donetsk region with shelling. Battles are taking place around the towns of Bakhmut, Soledar and Opitne. The Russian Ministry of Defense announced that Russian troops had captured two villages.

On the southern front, Russian forces are said to have taken up defensive positions and fired tank, mortar and artillery fire on Ukrainian positions and on the regional capital Kherson, which was abandoned by Russian troops earlier in November.

Combat activity has been reported in northeastern and central Ukraine.

Meanwhile, the US announced that it had awarded Raytheon Co. contract for the production of NASAMS anti-aircraft missile systems for Ukraine.

The contract is worth more than $1.2 billion and includes the production of "related equipment, services and spare parts". The funds will be allocated as part of the financial package of the Ukraine Security Assistance Initiative in 2023, Reuters explains.

The order will be made by the end of November 2025.

Shoigu said Russia would also work to improve the combat capabilities of its nuclear forces and that facilities were being built to deploy new missile systems. Russia has the largest stockpile of nuclear weapons in the world, with nearly 6,000 warheads, Reuters reported.

President Vladimir Putin has placed Russian-held territories in Ukraine under Moscow's nuclear umbrella and warned that he is ready to defend Russia's "territorial integrity" by any means available. The United States says it has warned Russia of the consequences of a possible use of nuclear weapons.

Russia and the US were due to hold talks in Cairo this week on their existing New START treaty, which limits the number of warheads.

But Moscow pulled out ahead of the meeting and accused the US of "toxic anti-Russian behavior" and trying to manipulate the treaty to its advantage.

ISW: The bloody battles for Bakhmut continue, the Russians are trapped again

“The bloody battles for Bakhmut continue, the armed forces of Ukraine fight back against the Russians, who are desperately trying to achieve success. However, the occupiers do not realize that they have once again fallen into a trap.”

This is what analysts from the Institute for the Study of War (ISW) explain about the long and fierce battle for Bakhmut.

“The Russian effort around Bakhmut shows that Russian forces have failed to learn at all from previous high-casualty engagements focused on targets of limited operational or strategic importance. In six months, they have achieved an increase of only about a few kilometers at a time, the experts commented.

"This pattern of operations is very reminiscent of previous attempts by the Russians to capture Sievierodonetsk and Lysychansk early in the war. Even if Russian troops continue to advance towards and within Bakhmut and even force a controlled withdrawal of the Ukrainians from the city, Bakhmut himself offers them little operational advantage. The costs associated with six months of brutal, persistent, and exhausting fighting around Bakhmut far outweighed any operational advantage the Russians could gain from capturing Bakhmut. On the other hand, Russian offensives around Bakhmut absorbed a significant portion of available Russian combat power, potentially facilitating the continuation of Ukrainian counteroffensives elsewhere," ISW said.

Ukraine is preparing new solutions to prevent Russia from manipulating the country's internal life in the future. "We are analyzing the intentions of the occupiers and preparing a new countermeasure, which will be more powerful than the current countermeasure. About 6 million users in most regions of the country and in Kyiv do not have access to electricity. The situation continues to be very difficult in the capital, as well as in the regions Kyiv, Vinnytsia, Lviv, Odesa, Khmelnytskyi and Cherkassy," Ukrainian head of state Volodymyr Zelensky said.