Day 280 of the Invasion of Ukraine: The Pentagon denies Patriot systems to Kyiv 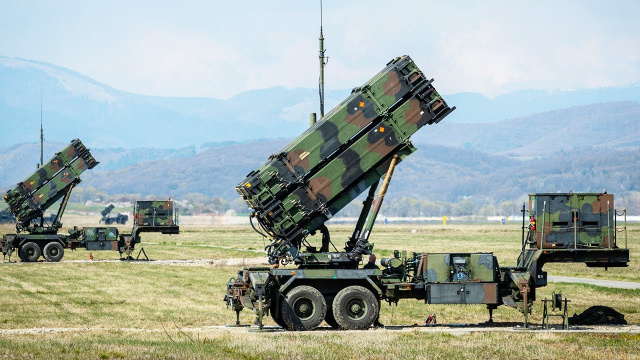 Zelensky: The Russians are attempting an offensive in Donbas and towards Kharkiv

Ukrainian President Volodymyr Zelensky said tonight that the situation on the frontline remains dire, with Russian forces attempting to advance into Donbas and towards Kharkiv.

In his regular video address to the nation, he reported that "despite their extremely heavy losses, the occupiers are still trying to advance in the Donetsk region, seize territory in the Luhansk region, advance towards Kharkiv and plan something to the south."

The two eastern Ukrainian regions of Donetsk and Luhansk, which form the so-called Donbas, have been the scene of fierce fighting between Russian and Ukrainian forces for months.

"But we hold our positions and, most importantly, we do not allow the enemy to carry out his intentions. They said that they will take the Donetsk region in the spring, summer, autumn. This week, winter already begins. They have their regular army there, every day they lose hundreds of mobilized and mercenaries, they shoot at their own when retreating," said Zelensky.

He declared that Russia would lose a hundred thousand of its soldiers killed this year, and "God only knows how many mercenaries."

The European Commission proposes to create a specialized tribunal to investigate Russia's crimes in Ukraine, which will be supported by the United Nations, said Commission President Ursula von der Leyen in a tweet. She added that Russia must also pay financial compensation for the destruction it is causing.

The damage caused to the Ukrainians is estimated at 600 billion euros, she emphasized:

"We have blocked 300 billion euros from the reserves of the Russian central bank and we have frozen 90 billion euros from the money of the oligarchs. In the short term, we can create, together with our partners, a structure to manage these funds and invest them. After we will direct them to Ukraine, and once the sanctions are lifted, Russia must pay in full for the damage it has caused."

Von der Leyen added that she will work with her partners globally to achieve this goal.

Pentagon denies Patriot systems to Ukraine. “These are not 'plug and play' weapons, they require training and support”

Ukraine will not receive Patriot missile defense systems from the United States in the near future, said Pentagon spokesman Pat Ryder, as quoted by the Voice of America. The Ukrainian agency UNIAN called the Americans' decision disappointing. However, for Washington, protecting the skies over Ukraine remains a priority issue.

During a briefing at the Pentagon, Pat Ryder said that the US Department of Defense does not plan to deliver the Patriot system to Ukraine. Reporters asked Ryder to clarify what the U.S. role would be if one of the allied countries did decide to provide Kyiv with these systems. Ryder replied:

"I don't want to speak for other countries, but this is a sovereign decision of each country. As far as a NATO member country is concerned, I assume that will be part of the discussions in the Alliance. We will continue to work closely with the international community to determine what Ukraine's defense needs are and to meet them."

In Ryder's words, it's important to understand that systems like the Patriot or advanced fighters or M1 tanks need serious maintenance. In addition, the military must undergo appropriate training.

"None of these systems work on a plug and play basis, you can't just show up on the battlefield and start using them," emphasized the Pentagon representative.

Pat Ryder explained that the department takes such details into account. "The United States, however, continues to consider Ukraine's air defense a priority issue. Therefore, Washington will continue to work with allies to continue to provide Ukraine with the necessary assistance and weapons that can be used immediately by the military."

The topic of the Patriot air defense systems came up in the Ukrainian context alongside Germany's offer to provide them to Poland to defend its western border after the Przemyśl incident. Warsaw further developed the idea, in turn proposing that the systems be deployed on the territory of Western Ukraine and from there preemptively protect the eastern border of the country and the Alliance. The issue has been taken seriously in Russia, and on Wednesday former President Dmitry Medvedev threatened from a keyboard that deploying the Patriots to Ukraine would make them legal military targets for Moscow.

The US declares Prigozhin's private army a terrorist organization

The White House is considering declaring PMC Wagner a terrorist organization to prevent the growing influence of Yevgeny Prigozhin's fighters in Africa, as well as their involvement in the war against Ukraine.

This was reported by Bloomberg, citing its sources.

A final decision has not yet been made.

Declaring the Wagnerites a terrorist organization would allow the United States to prosecute the group's leaders and members, as well as pursue its assets around the world, the agency's interlocutors said.

The State Department and the Kremlin declined to comment.

"Putin's chef" Yevgeny Prigozhin and his Wagner PMC have already been hit by US, UK and European Union sanctions, although the group continues to grow in power and influence.

In September, Prigozhin admitted for the first time that he founded the group and that it operates in Syria and other Arab countries, as well as in Africa and Latin America. He calls Wagner "one of the pillars of the motherland".

In September, when the main offensive forces of the Russian armed forces ended, Prigozhin began to publicly recruit prisoners into the ranks of the PMC as cannon fodder for the war against Ukraine.

According to Western analysts, the businessman is working on his reputation among the "extreme right" electorate in Russia by entering into an open confrontation with the military leadership. Putin himself is extremely dependent on the Wagnerites.

The private army is financed both by the Kremlin and by "own" revenues. Wagner is believed to receive hundreds of millions of dollars from gold and diamond mines in Africa under their control. It is also believed that the group also controls serious drug trafficking from South America.

Russian authorities want to send 250 prisoners to the Urals to work in a weapons factory, DPA reported.

The convicts are to work at the Uralvagonzavod plant in the city of Nizhny Tagil as machine and crane operators, turners and welders, Russian media reported, citing authorities. According to the posts, the job provides some perks.

For example, prisoners will not be housed in cells, but in a dormitory, and will have the opportunity to live with relatives.

The messages cannot be independently verified, the DPA said.

"Uralvagonzavod" is one of the largest Russian defense corporations, known for the production of battle tanks - from the "T-72" to the new "T-14".

The prices of Starlink communication devices in Ukraine almost doubled

The list price of Starlink communications devices nearly doubled in Ukraine as local mobile networks began to crash due to Russian missile attacks on the country's power grid, leading to increased demand for the SpaceX-made satellite communications device, the Financial Times reported.

The Starlink terminals, which are manufactured by Elon Musk-owned SpaceX, will increase their price to $700 for new Ukrainian users, according to the company's website. That's up from about $385 earlier this year, show screenshots of past price data shared by consumers in the country.

The consumer price of a monthly Starlink subscription has fluctuated recently, dropping from around $100 to $60 on Ukraine's Independence Day on August 24 to "reflect local market conditions", but will now be raised to $75.

Starlink prices also rose in neighboring Poland, where many Ukrainians use the communications system to avoid problems with domestic mail delivery, but prices remained the same in Slovakia and most other European countries.

Musk did not immediately respond to a request for comment from the Financial Times.

The small portable devices, which connect to satellites via a book-sized antenna, provide critical Internet connectivity to the Ukrainian military and civilians in areas with little or no mobile phone networks or broadband coverage.

It's unclear whether prices have changed for the Ukrainian government, which uses a combination of Starlink from various donors, including directly from Musk's SpaceX, the Polish government and NATO allies, as well as backers drawn from the so-called "crowdsourcing" (crowdsourcing in the literal sense means using the resource of the crowd).