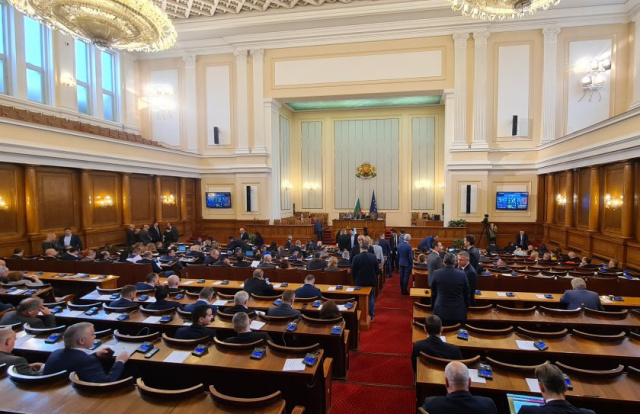 With 127 votes "In Favor", 90 "Abstentions" and 2 "Against", the deputies accepted the extension of the state budget, the Health Fund and the State Social Insurance in the first reading.

“We Continue the Change” insists that a new budget for 2023 be submitted by the caretaker government. The Ministry of Finance has developed three options for the budget. With a deficit of 6.5% if current policies continue.

GERB-SDS, DPS and "Bulgarian Rise" support the caretaker government not to introduce a new budget, but for this to be done by a regular cabinet. BSP want an increase in social payments. Among their proposals is an increase in the minimum wage to 50% of the national average or to make it BGN 850. Also, if possible, a ceiling on the prices of natural gas, water, heating and electricity for households should be introduced.

The Ministry of Finance has calculated that such a thing will lead to 4.8 billion BGN more expenses. In this situation, the deficit would reach 9.4% of the country's GDP.

WCC insists on a completely new budget, not a continuation of the one adopted by the "Petkov" cabinet. They also have ideas for more social spending, which, according to the calculations of the Ministry of Finance, will increase the expenditure part of the budget by BGN 3.6 billion, which will increase the deficit to 8.7% of GDP.

"Radev's government refuses to submit a new budget that would raise incomes, policies to overcome the crises, fuel prices, etc. Instead, it submitted a bill on the operation of the budget," commented Venko Sabrutev from WCC.

However, the budget was defended by acting Prime Minister Galab Donev.

"Vazrazhdane" announced that they will refrain from supporting the budget because they believe that the costs are not distributed correctly. WCC, despite their desire to increase pensions, could not say where the funds for this would come from.

BSP will submit its proposals between the two readings of the budget.

"Today we are looking at the most important issue for the state, we have been saying this since October 17. Even then we were talking to the parliamentary groups about budget talks. We cannot leave the state in uncertainty and the people in this price situation with frozen incomes. Whoever is the Council of Ministers, they are obliged to submit a state budget by October 31. You claim that you have found many crises, and at the same time you propose to extend the budget of the previous government," said Kornelia Ninova.

"I want to bring you back to the serious conversation about the budget. The main risk is the following: if the budget extension is accepted and a government is formed, it does not matter, but if there is no cabinet formed, we enter the hypothesis that the new government will be in May. Until then, will we have buffers", said Martin Dimitrov from Democratic Bulgaria".