Day 277 of the Invasion of Ukraine: Heavy Snowfall leaves Millions of Ukrainians without Electricity and Heating 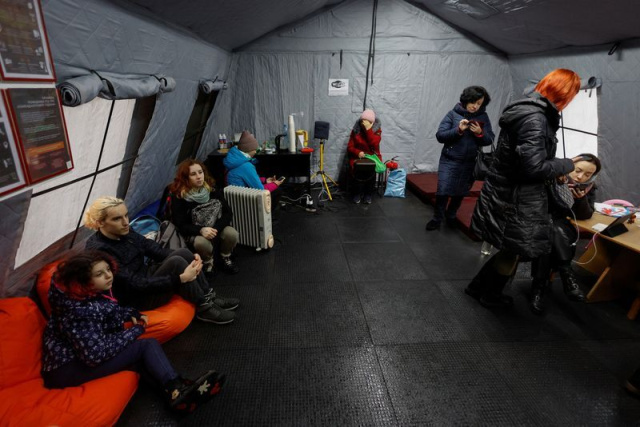 The morning began with airstrikes over a number of regions in Ukraine. Sirens sound in Dnipropetrovsk, Kirovograd, Poltava and Cherkasy regions. An air alert was also announced in the city of Zaporizhzhia.

At 8:20 a.m., Russia launched a missile attack on Kryvyi Rih in the Dnipropetrovsk region, UNIAN writes.

Later, this information was confirmed by the head of the military-civil administration of Kryvyi Rih, Alexander Vilkul. He urges the locals to take shelter: "Kryvyi Rih - rocket attack. Stay in the bomb shelters."

Heavy snowfall leaves millions of Ukrainians without electricity and heating

From today, heavy snowfalls begin in Kyiv. Temperatures during the day and night will drop below zero, and millions of people who still live in the Ukrainian capital and its suburbs will be left without electricity and heating, Reuters reported.

Snow is expected to continue in Kyiv until the middle of the week, and temperatures will remain below zero.

President Volodymyr Zelensky said 14 of Ukraine's 27 oblasts and Kyiv had power restrictions for "more than 100,000" consumers in each region.

"If consumption increases in the evening, the number of outages may increase. This once again shows how important it is now to save electricity and consume it rationally," Zelensky said in his evening video address.

The chief operating officer of the company YASNO, which supplies energy to Kyiv, Sergey Kovalenko, said the situation in the city had improved but still remained "quite difficult". He pointed out that residents should have at least four hours of electricity per day.

"If you haven't had electricity for at least four hours in the past 24 hours, write to DTEK Kyiv Electric Networks, colleagues will help you find out what the problem is," Kovalenko wrote on his Facebook page.

The latest Russian bombing on Wednesday caused the worst damage to energy infrastructure since the start of the war and left millions of Ukrainians without electricity, water and heat.

Russia maintains that it is not targeting the civilian population, and the Kremlin has commented that Moscow's strikes on energy infrastructure are a consequence of Kyiv's reluctance to negotiate.

More than 20 countries supported Kyiv's "Grain from Ukraine" initiative, with the total amount raised being about 0 million.

Up to 60 ships are being prepared to leave the ports with Ukrainian grain.

The "Grain from Ukraine" initiative was announced on the day of commemoration of the Holodomor - a mass famine during the Stalinist regime in 1932-1933.

Ukrainian President Volodymyr Zelensky stressed that never again should hunger be used as a weapon:

"Ukrainians experienced genocide. And today we are doing everything possible and impossible to stop Russia's new genocidal policy. Step by step we are creating a system that will stop aggression, eliminate its consequences and guarantee long-term security."

Polish Prime Minister Mateusz Morawiecki said Poland would support the million initiative to facilitate grain exports to Africa. Warsaw is expanding infrastructure in the border area and preparing transport lines to support the export of grain and other goods from Ukraine.

Lithuania has sent to Ukraine 6 trucks with energy equipment - more than 100 transformers of different power, and plans to send more such equipment.

Belgium will supply Ukraine with underwater drones and mobile laboratories, and about a hundred Belgian instructors will train Ukrainian soldiers.

More than 30 people have died in the Kherson region as a result of continued Russian shelling from the east bank of the Dnieper since the withdrawal of Russian forces from Kherson two weeks ago, Ukrainian police said. Power was restored earlier in the city, but current restrictions remain in place in 14 Ukrainian regions and in Kyiv.

The foreign minister of Belarus has died

Before the 2020 presidential election and mass anti-government protests in Belarus, Makei was one of the initiators of efforts to improve Belarus' relations with the West and criticized Russia. However, he abruptly changed his position after the protests began, saying they were inspired by Western agents.

After Russia's invasion of Ukraine began in February, a supporter of close ties between Moscow and Minsk, he said the West had provoked the war and that Ukrainian authorities should agree to Russian peace terms.

A few days before the start of the war, Makei promised that there would be no attack on Ukraine from the territory of Belarus. A few days later, Russian troops proved him wrong.

"We are shocked by the reports of the death of the head of the Ministry of Foreign Affairs of the Republic of Belarus Vladimir Makei," Russian Foreign Ministry spokeswoman Maria Zakharova wrote on her Telegram channel. "Official condolences will be issued shortly."

Belarusian President Alexander Lukashenko, who has remained in power despite protests since 2020, also expressed his condolences.

Vladimir Makei was born in 1958. In 1980 he graduated from the Minsk State Pedagogical Institute for Foreign Languages, in 1993 from the Diplomatic Academy of the Ministry of Foreign Affairs of Austria. He spoke German and English.

From 1980 to 1993, he served in the armed forces of the USSR and Belarus. Since 1993, he has held various positions in the Ministry of Foreign Affairs of Belarus. He was deputy head of the State Protocol, represented the country in the Council of Europe. From 2000 to 2008, he was an assistant to the President of Belarus, Alexander Lukashenko. From 2008 to 2012 - Head of the Presidential Administration of Belarus.

He has been Minister of Foreign Affairs since 20 August 2012. Makei is married and has three children.

According to the Belarusian Foreign Ministry, Mackay held his last meeting the day before, on November 25, with the Apostolic Nuncio, Archbishop Ante Jozic. The main topics of the conversation were the 30th anniversary of the establishment of diplomatic relations between Belarus and the Vatican, as well as the current situation of the Roman Catholic Church in the republic, the ministry announced.