After the Resolution of the EP: Russia bombed Ukraine with Missiles, Kyiv is again without Power 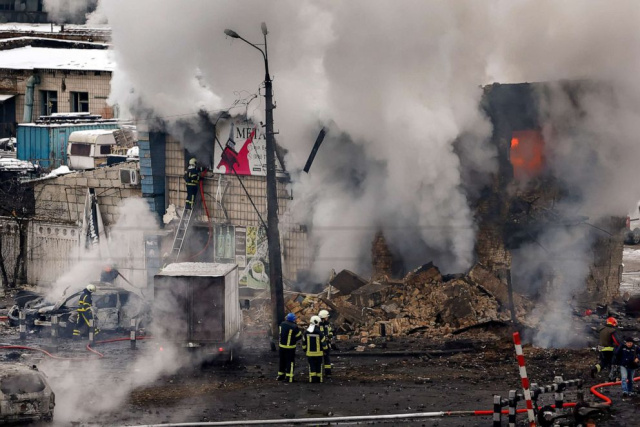 Explosions in Kyiv, rocket attacks against residential buildings and the civil infrastructure of the capital are reported by the Ukrainian media and social networks. The "Suspline" portal writes about explosions in the center of the Ukrainian capital, specifying that at the moment it is not known whether it is damage from a Russian attack or the work of the Ukrainian air defense. The agencies report at least three civilians killed in the capital, the entire territory of Ukraine has been subjected to massive rocket attacks.

"Russia launched many missiles, Kyiv and several regions are under attack," UNIAN news agency announced on Wednesday afternoon. The missiles were launched by strategic aviation bombers of Russia.

According to the head of the regional military administration in Mykolaiv, Vitaly Kim, Russia has launched at least 9 Tu-95 bombers. From the area of ​​Mariupol, aviation fired 5 rockets, but later Kim reported that the rockets were more and came from the south and from the east, the air defense is working. Southern Ukraine is under serious attack, rockets are flying towards Odesa.

"Do not ignore the air alert signals, there is a danger of rocket fire on the district," warned the head of the Kyiv region, Oleksiy Kuleba. Explosions were registered in Poltava region, rocket attacks were also reported by the head of Dnipropetrovsk region, Mykola Lukashchuk.

The Russian salvo was fired at the moment when the European Parliament voted on a declaration recognizing the Russian Federation as a state sponsor of terrorism. Volodymyr Zelensky's chief of staff Andriy Yermak makes a connection between the two events. "Terrorists confirm that they are terrorists - they launch rockets. Naive losers," Ermak said in Telegram.

At the same time, posts from Kyiv showing black smoke in the sky above the city are increasing. Mayor Vitaly Klitschko, quoted by UNIAN, confirms losses in the capital. "One of the missiles hit an infrastructure object of Kyiv. Stay in the shelters. The air alert continues." After this, Klitschko's announcement was followed by a new one about a masked large-scale Russian attack in various places in the capital. At 3:16 p.m., the Kyiv Regional Military Administration reported three people killed and six wounded when a Russian missile hit a residential building in the capital.

The website of the European Parliament has fallen victim to a hacker attack, EP President Roberta Metsola announced on Twitter. This happened hours after MEPs recognized Russia as a state sponsor of terrorism. Metsola said a pro-Kremlin group claimed responsibility for the cyber attack.

The @Europarl_EN is under a sophisticated cyberattack. A pro-Kremlin group has claimed responsibility.

Our IT experts are pushing back against it & protecting our systems.

This, after we proclaimed Russia as a State-sponsor of terrorism.

"The European Parliament was subjected to a skilled cyber attack. A pro-Kremlin group claimed responsibility. Our IT experts counter and protect our systems. This is happening after we declared Russia a state sponsor of terrorism. My answer is: #SlavaUkraini," wrote the leader of the European Parliament.

There is currently no access to the institution's site, most likely it was shut down to stop hackers from accessing it. The cyber attackers themselves explained that they carried out a DDOS attack against the European Parliament without destabilizing the work of the organization from the inside.

"The work of the site was affected by the high level of external network traffic," European Parliament press secretary Jaume Duch said on Twitter. The attack resulted in denial of fulfillment of requests from users to access content on the site. "Our specialists are working to solve the problem as soon as possible," added Duch.

Following the atrocities carried out by Vladimir Putin’s regime against Ukrainian civilians, MEPs have recognised Russia as a state sponsor of terrorism. Press release: https://t.co/YuBxBaU4GX pic.twitter.com/tf4qxSJLoB

On Wednesday, by a resolution of the European Parliament, Russia was recognized as a country sponsoring terrorism. The document lists the numerous crimes committed by the Russians in Ukraine, as well as unwavering support for the independence, sovereignty and territorial integrity of Ukraine. MEPs condemned Russia's illegal, unprovoked and unjustified war against Ukraine.

When the resolution was voted, 494 votes were in favor, 58 against and 44 abstentions. Among those who voted against are the five MEPs from Bulgaria Sergei Stanishev, Elena Yoncheva, Petar Vitanov, Tsvetelina Penkova and Ivo Hristov. Eva Maydell and Andrey Slabakov did not participate in the vote, Maydell expressed support for the resolution on Facebook.

Read more from the 273rd day of the war in Ukraine.