Day 272 of the Invasion of Ukraine: The WHO fears for the lives of Millions of Ukrainians this Winter 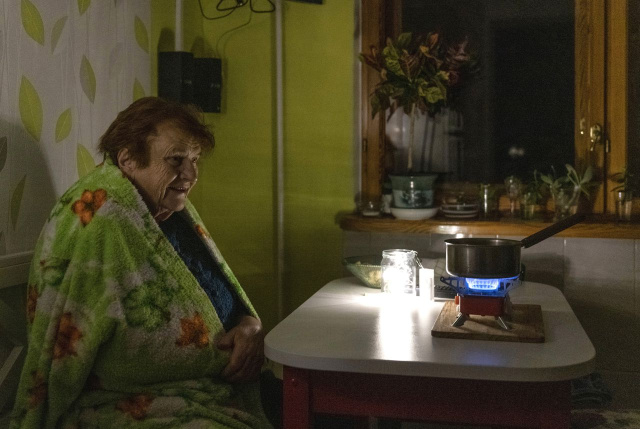 The lives of millions will be at risk in Ukraine this winter, announced the World Health Organization (WHO). Ukrainian authorities urged residents of Kyiv and several other areas to limit their use of electricity as the power grid was severely affected by the Russian strikes.

Elderly and vulnerable people are preparing for a voluntary evacuation of the war-torn southern city of Kherson.

Half of Ukraine's energy infrastructure has been damaged or destroyed, and 10 million are currently without electricity, said the World Health Organization's (WHO) regional director for Europe, Hans Kluge. Many Ukrainians may lose their lives in the coming winter because of the cold and because of the migration that Russian missile strikes against the country's energy grid will lead to, warned Kluge.

The warnings come amid a cold snap in Ukraine, where snow has fallen and temperatures have plunged below freezing.

The Zaporizhzhia nuclear power plant, which produced more than 25% of Ukraine's electricity, is no longer generating electricity. More than 10 explosions have been reported in the past two days in the area of ​​the plant.

The nuclear tragedy this time was avoided by meters, not kilometers, said the Director General of the International Atomic Energy Agency (IAEA), Rafael Grossi.

Radiation measurements in the area are within the norms.

Moscow and Kyiv blame each other for the shelling.

Ukrainian President Volodymyr Zelensky called on NATO to guarantee the plant's protection from Russian sabotage. “We are working to ensure the implementation of the IAEA's requirement to cease any hostile actions against Ukrainian nuclear facilities”, the president said in his usual video address, stressing:

"The demilitarization of the Zaporizhzhia nuclear plant is extremely important. Russia must withdraw all its fighters from there and stop shelling the plant."

Zelensky also called on his compatriots to limit electricity consumption.

Against this background, elderly and vulnerable people are preparing for voluntary evacuation from Kherson. The war-ravaged southern city, which the Ukrainian army entered on November 11 after the withdrawal of Russian armed forces, has almost no electricity or running drinking water.

"Half of Ukraine's energy infrastructure is out of order," he added.

Ukrainians will most likely have to put up with daily blackouts across the country until at least the end of March, predicted the head of a major private electricity supplier yesterday.

More than 950 thousand users were disconnected from the network on Monday. New blackouts are planned for today, warned the state electricity system operator "Ukrenergo".

In recent weeks, Russia has been launching missile strikes on Ukraine's energy infrastructure. As a result, millions of people were left without electricity amid the onset of winter and sub-zero temperatures.

The Pentagon accelerates the purchase of weapons because of Ukraine

The U.S. military is speeding up its arms acquisition process to speed up a backlog of contracts needed to replenish the U.S. arms stockpile depleted by supplies to Ukraine. A US official said on Monday.

Doug Bush, the military's chief weapons acquisition officer, told reporters that the fast-track contracting hinged on bringing together processes that had previously been done sequentially, and was based on lessons learned from the coronavirus pandemic.

Ukraine relies heavily on the United States for weapons. Washington has shipped weapons worth about $17.9 billion since Moscow launched its invasion of the country on February 24.

According to the latest Pentagon figures, contracts worth $2.6 billion have been awarded to replace weapons rushed to Ukraine since Washington began using a special presidential withdrawal authority (PDA) that allows for quick transfers of weapons without congressional approval in response to emergency situation.

The United States has awarded about $1 billion in contracts to arms manufacturers since the second half of October, mostly for munitions and missiles, suggesting the pace of contract decisions is accelerating. A $477 million contract for Lockheed Martin Corp was one of the deals.

The military received its first tranche of funds to replace weapons sent to Ukraine on May 3, with tranches every few weeks thereafter, Bush said. Each tranche ranges from a few hundred million to nearly a billion, he said, and the rate of receipt of funds is highly correlated with the awarding of new contracts for replacement weapons.

The Ukrainian prosecutor's office announced yesterday that it had discovered four buildings in Kherson where Russian forces were carrying out torture, writes the French newspaper "Figaro".

They also burned the bodies of their own victims in a landfill in Kherson, access to which was prohibited, writes the British "Guardian".

According to local residents, Russian trucks arrived at the site carrying black sacks, which they then set on fire. At the same time, the air was filled with smoke and the horrible smell of burning flesh. They believe that in this way the Russians got rid of the bodies of their soldiers killed during the heavy fighting.

A local official, who wished to remain anonymous, told the British publication that the Ukrainian authorities were not interested in where the Russians buried their dead, but their goal was to find the bodies of tortured Ukrainians killed and buried in mass graves.

Some believe that burning the bodies of their own soldiers was the easiest way for Moscow's forces to dispose of the corpses, as the bridges over the Dnieper River were too fragile to support trucks.

Dozens of other residents of Kherson say the same to the publication, but the Ukrainian authorities have so far not confirmed the information. Ukraine's security service believes the bodies of thousands of dead Russian soldiers have been unofficially dumped as the Kremlin registers them as "missing in action" in an attempt to cover up its losses in the war in Ukraine. This is confirmed by intercepted phone calls of Russian soldiers cited by the British publication.