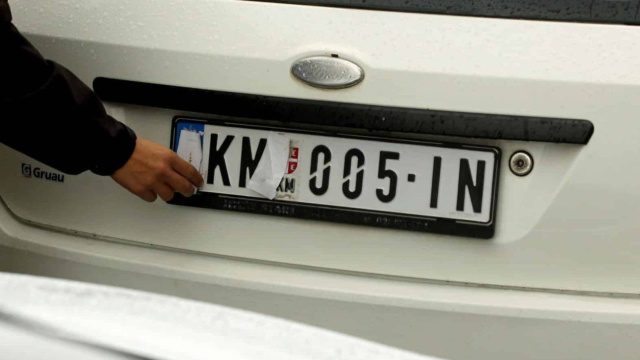 The statement from the US embassy followed the breakdown of talks between the leaders of Serbia and Kosovo, President Aleksandar Vucic and Prime Minister Kurti, in Brussels.

After that, the European Union and the US expressed (for the second time in a week) concern about the situation and called for a solution. On Twitter, Kurti explained that he would be happy to "work with the US and the EU to find a solution in the next two days".

Earlier, the US State Department expressed "disappointment" that an agreement could not be reached between Vucic and Kurti. According to the institution's spokesman, Ned Price, Kurti and Vucic must accept concessions in order not to jeopardize the hard-won peace in the already fragile region.

Connection between the plate dispute and the Franco-German proposal

Meanwhile, Europe is leading - backed by the US - efforts to persuade the two countries to accept the so-called Franco-German normalization proposal between Belgrade and Pristina, which would open the way for Kosovo to join international organizations (without Serbia blocking it).

Belgrade is pressing Pristina to honor a commitment made in Brussels a decade ago by creating the Association of Serbian Municipalities, a body for the autonomy of the Serbian minority. European External Action Service spokesman Peter Stano said the EU was still working on the proposal.

Yesterday, the European Union suggested to Kurti that Kosovo not introduce the fines, and Serbia - not to issue new license plates for their compatriots in Kosovo. Kurti explained that this would only be acceptable as a solution if it went hand in hand with a "final normalization agreement".

Brussels and Washington have coordinated steps to contain tensions between Serbia and Kosovo as necessary since Joe Biden took over the White House. Most of the temporary solutions that led to de-escalation after crisis moments like the border blockades because of the signs are the result of the work of the two special representatives for the Western Balkans, the European Miroslav Lajcak and the American Gabriel Escobar.

Vucic, for his part, met with representatives of the Kosovo Serbs after the visit to Brussels - two weeks after they left Kosovo's institutions. "It is time as a people to show seriousness and responsibility and preserve our centuries-old hearths."