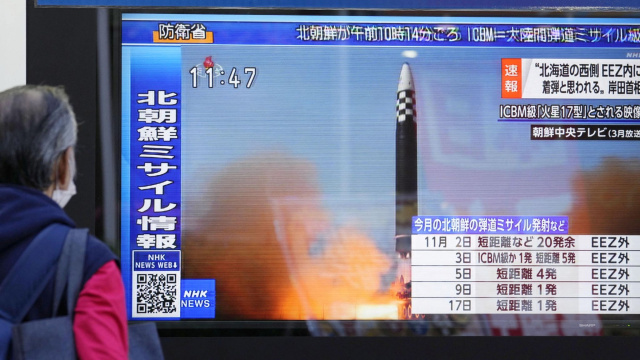 Kim said that Pyongyang "will resolutely react to nukes with nuclear weapons and to total confrontation with all-out confrontation," the KCNA report said, adding that Kim oversaw the missile launch in person. The threats come a day after Pyongyang fired an intercontinental ballistic missile.

The isolated country fired an intercontinental ballistic missile (ICBM) toward the East Sea on Friday, the South Korean military said, in protest over the United States' move to reinforce its "extended deterrence" protection of South Korea and Japan.

Attending the site with his daughter and wife, Kim said threats from the United States and its allies pursuing a hostile policy prompted his country to "substantially accelerate the bolstering of its overwhelming nuclear deterrence," reported The Jerusalem Post.

"Kim Jong Un solemnly declared that if the enemies continue to pose threats ... our party and government will resolutely react to nukes with nuclear weapons and to total confrontation with all-out confrontation," the official KCNA news agency said.

The launch is presumed to have involved the Hwasong-17 ICBM, according to Yonhap, the same ICBM was test-fired on November 3, but the launch was seen as a failure.

The launch of the Hwasong-17 ICBM was confirmed by the north and was part of a "top-priority defense-building strategy" aimed at building "the most powerful and absolute nuclear deterrence," KCNA said, calling it "the strongest strategic weapon in the world."

The Hwasong-17 ICBM was called a "monster" of a missile for its sheer size. It is able to carry multiple warheads and has a range of around 15,000 km, according to North Korea, long enough to reach the entire US mainland, reported The Jerusalem Post.

"North Korea's ICBM launch this time is a significant provocation and serious act of threat that undermines peace and stability not only on the Korean Peninsula but also in the international community and a clear violation of UN Security Council resolutions," the JCS said in a text message sent to reporters, according to Yonhap.

Kim's statements were released on the day that South Korea and the United States simulated strike operations against military sites linked to North Korea's missile program. The exercise took place a few hours after Pyongyang launched an ICBM into the Sea of Japan. F-35 stealth fighter-bombers from both air forces also took part in the simulation. The maneuver served to "demonstrate the firm will to resolutely respond to any threat and provocation, including North Korea's ICBM, and the overwhelming ability and readiness to strike the enemy with precision," said a statement from the South Korean command.

Prime Minister of Japan, Fumio Kishida, reported from Bangkok, where he is attending the Asia-Pacific Economic Cooperation (APEC) summit, that the missile landed within Japan's exclusive economic zone west of the northern island of Hokkaido, causing no damage to aircraft or boats.

Kishida called North Korea's latest provocation "completely unacceptable", and Japan's foreign ministry filed a formal protest through Beijing's diplomatic channels. The South Korean Armed Forces hypothesized that the latest missile launched from Pyongyang is an ICBM, based on the first analysis of the ballistic trajectory.