Day 267 of the Invasion of Ukraine: The EU holds Russia responsible for the missiles in Poland 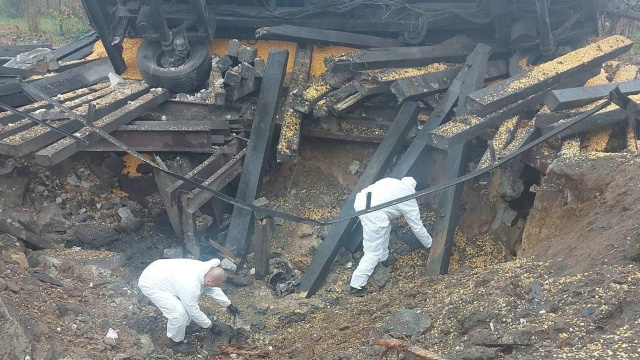 Fierce fighting in eastern Ukraine after Russian withdrawal from Kherson

Ukraine has said it faces fierce fighting in the east after Russian troops pulled out of the southern city of Kherson.

Meanwhile, NATO and Poland have concluded that the missile that crashed in Poland probably deflected after being fired by Ukraine's air defenses.

NATO ambassadors held emergency talks in response to the explosion of a Soviet-made missile that killed two Polish citizens near the border with Ukraine.

Polish President Andrzej Duda said it was an isolated incident and there was no immediate threat to Polish citizens. According to him, the S-300 missile is old, manufactured in the Soviet Union, and it is very likely that it was launched by Ukrainian air defenses. However, NATO Secretary General Jens Stoltenberg pointed out that the responsibility lies with Russia, which started the war in Ukraine, which led to this situation.

Ukrainian President Volodymyr Zelensky called on Kyiv's allies to share "all data" about the missile that landed in Poland:

“The Ukrainian position is very transparent: we strive to establish all the details, every fact. That is why we need our specialists to join the work of the international investigation and get access to all the data available to our partners and the place of the explosion. The whole our information is in full access, we have been giving it to our partners since the night, since the first hours, when the world began to understand what happened.”

Zelensky ended his evening video address with a minute's silence in memory of the victims of the war in Ukraine and those of the incident in Poland. Earlier yesterday, the Ukrainian president said there was no doubt the missile was Russian, citing military reports in his possession.

Russia's foreign ministry said the "chaos" surrounding allegations of Russian involvement was "part of the West's systematic anti-Russian campaign". The missile incident came after Russia fired dozens of missiles at cities in Ukraine targeting its power grid, causing power outages for millions of people. According to Kyiv, it was the most intense attack since the beginning of the nine-month war. Heavy fighting was also reported in the eastern Donetsk region. Ukrainian forces have repelled attacks on Avdeevka and Bilokhorovka.

A team from the Bulgarian National Television is located in the very village of Przewodów - the place where the incident with the fallen rocket happened. It is a small border village located on the Polish-Ukrainian border where a Russian-made rocket exploded in an abandoned farm building on Tuesday around 5:00 p.m., killing two people - aged 40 and 42.

A large number of police forces are deployed at the site. There are also Polish and NATO investigators looking into exactly what happened. Przewodów is only 6 km from the Polish-Ukrainian border, and on the other side is the city of Lviv, which has been constantly bombed by the Russian army since the beginning of the war. 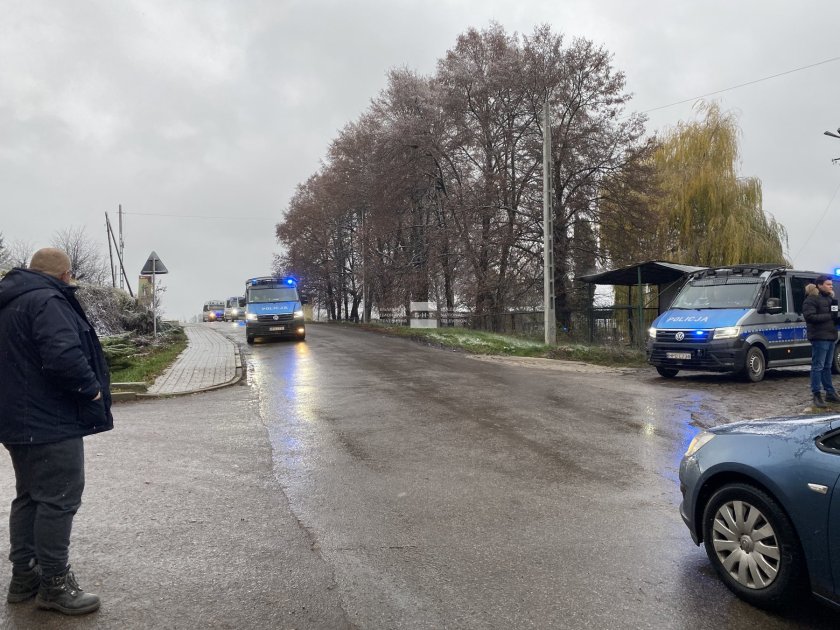 Late last night, Prime Minister Mateusz Morawiecki reiterated that this was an isolated incident and not a targeted, deliberate attack on Poland, that NATO allies had stepped up air patrols over the country, that Poland itself had raised the readiness of some of its forces, and that monitors the airspace near the border.

President Andrzej Duda reassured Poles, urging them not to succumb to fake news and manipulation, which he said would be the case in the coming days. After holding several security councils, the Polish government announced that the missile that exploded from the Ukrainian air defense system was an isolated incident and could not be considered an incident that would be repeated in the future.

Local people are shocked by what happened. They tell how they heard the flight and explosion of the rocket that dug a huge crater. Polish and American specialists are investigating this incident. Ukraine has requested access to that investigation, but it is unclear at this time whether it will be granted one.

The EU holds Russia responsible for the missiles in Poland

"This tragic incident is the result of another massive wave of missile attacks on Ukrainian cities by Russia yesterday, targeting civilians and civilian infrastructure," said Josep Borrell.

"These attacks are a gross violation of international law."

"Russia continues to spread disinformation about the unjustified and unprovoked war it is waging against Ukraine. We will continue to expose Russia for its information manipulation and interference," Borrell added.

"The EU will remain steadfast in its support for Ukraine's independence, sovereignty and territorial integrity, as well as its inherent right to self-defense against Russian aggression," he said.

Europe will continue to provide "strong" political, military, humanitarian and financial support to Ukraine "for as long as necessary", Borrell assured.

He also expressed solidarity with Poland and the Polish people and expressed his condolences to the families of the two victims of the attack.

"The EU fully supports Poland's fact-finding investigation on the ground and we will remain in close contact with our partners on the next steps," he said.

The expulsion of more than 400 suspected Russian spies from across Europe this year has dealt the "most significant strategic blow" to Moscow in recent history and caught Vladimir Putin by surprise, said the Director General of the National Security Agency (MI5) Ken McCallum.

He said a huge number of Russian officials had been expelled from around the world, including more than 600 from Europe, of whom more than 400 had been identified as spies, Reuters reported.

"In this way, the most significant strategic blow against Russian intelligence services in recent European history was delivered," said McCallum.

"And along with the coordinated waves of sanctions, their scale took Putin by surprise."

He said the response followed the pattern set by Britain after the poisoning of Sergei Skripal and his daughter Yulia in Salisbury, southern England, in 2018.

"The UK must be prepared for Russian aggression in the coming years," he said.

Russia's gross domestic product shrank by four percent in the third quarter, according to a preliminary estimate by the national statistics agency Rosstat.

According to official data, Russia has fallen into recession as Western sanctions weigh on the economy, AFP reported.

As this follows a decline of the same size in the second quarter, Russia now meets the technical definition of a recession with two consecutive quarters of falling GDP.

However, the four percent drop in economic output between July and September was smaller than the 4.5 percent contraction expected by many analysts.

The contraction was driven by a 22.6% drop in wholesale trade and a 9.1% drop in retail trade.

Western sanctions have restricted exports and imports, including of key manufacturing components and spare parts.

Companies are also suffering from staff shortages as the partial mobilization took several hundred thousand people out of the workforce.

Despite the shrinking economy, Russia's unemployment rate was 3.9% in September, according to Rosstat.

Thus, the Russian economy has become even more dependent on energy exports, which account for about 40% of the federal government's revenue.

"The situation continues to deteriorate, this is not a surprise," said Dmitry Polevoy, director of investments at Locko Invest in Moscow.

UN: The validity of the Black Sea deal for the export of Ukrainian grain has been extended

The UN secretary-general announced on Thursday that he welcomed the agreement between all parties to extend the Black Sea grain deal to facilitate the export of Ukrainian agricultural products from the country's southern Black Sea ports, Reuters reported.

"I welcome the agreement by all parties to continue the Black Sea Grain Initiative to facilitate safe shipping for grain, food and fertilizer exports from Ukraine," said UN Secretary-General Antonio Guterres.

He added that the UN is also "fully committed to removing remaining obstacles to food and fertilizer exports from the Russian Federation," part of the deal that Moscow sees as key.

According to Reuters sources, the renewal of the deal does not include the export of Russian ammonia by pipeline to a Black Sea port.

The Black Sea initiative for the export of grain from Ukraine has been extended by another 120 days, Ukrainian Minister of Infrastructure Oleksandr Kubrakov announced at the same time.

"We have officially addressed the partners with a proposal to extend the initiative by one year and to include Mykolaiv port in it," he wrote on Twitter while thanking Ukrainian President Volodymyr Zelensky, his Turkish counterpart Recep Erdogan, the Minister of Defense of Turkey Hulusi Akar and the Secretary General of the United Nations (UN) Antonio Guterres for their contribution to the extension of the agreement.

#BlackSeaGrainInitiative will be prolonged for 120 days. ???????? @ZelenskyyUa together w/ @antonioguterres ????????@UN, ???????? @RTErdogan & Minister of Defence Hulusi Akar @tcsavunma made another important step in the global fight against the food crisis.

Russia and Ukraine signed the deal for the export of Ukrainian grain through the Black Sea in July. Meanwhile, Russia temporarily left the agreement and accused Ukraine of attacking its ships using grain export ships. Moscow eventually returned to the deal after Kyiv met some of its conditions.

Kristalina Georgieva: The war in Ukraine is the most important negative factor for the world economy

The war in Ukraine is the single most important negative factor for the world economy this year, and most likely for 2023 as well. This is what Kristalina Georgieva, the managing director of the International Monetary Fund (IMF), told CNN.

"Anything that causes more anxiety, of course, harms the prospects for growth and the provision of the needs and aspirations of people everywhere," the world body's chief noted in response to the incident in which a missile landed on Polish territory earlier this week. , causing the death of two people.