The Bulgarian Socialists at Consultations with the President: We will Not Support the First Mandate 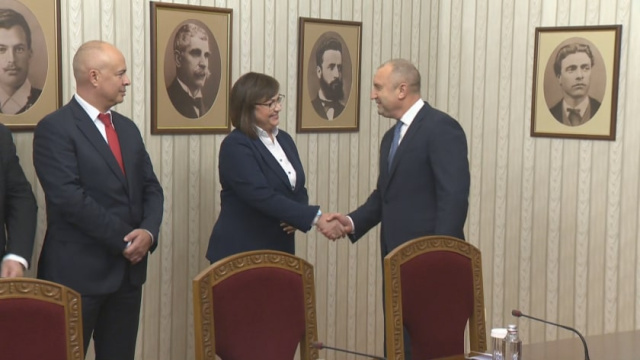 The Bulgarian Socialist Party (BSP) will not support GERB for the first mandate. This was stated by BSP leader Kornelia Ninova at the consultations with President Rumen Radev. If invited, the Socialists will participate in the talks for the second term of "We Continue the Change" (WCC).

During the talks at "Dondukov" 2 street, the main topics were the budget, social support in the winter, as well as deals regarding military aircraft.

BSP leader Kornelia Ninova considers the time that President Rumen Radev gives to the political forces to look for a working formula for figuring out a government to be wasted. She also explained the position of BSP for support for cabinet in the handing over of the mandates.

"We will not support the first mandate of GERB, this is a clear, categorical position. A second mandate of WCC, if they invite us, we will participate, we achieved good things with them in the government, we are satisfied with the social policy implemented by this government".

Ninova commented that the consultation time was being used for mutual accusations between the first two parties.

"We believe that real talks and meetings to form a cabinet will begin after the handing over of the first mandate, so the sooner it happens, the sooner the talks will start," she pointed out.

Radev recalled that the Constitution does not bind the president to deadlines for holding consultations and commented that if the mandates are delivered quickly and the parliament does not appoint a cabinet, it means elections in January or February.

"If we get to that point, I guess the accusations will come back to me - why have I set a date for the elections at the exact time when you, the parties, have no way of conducting an election campaign," the president pointed out.

BSP will make proposals between the first and second reading of the current law to extend the budget for 2022, said Kornelia Ninova.

"Increasing the minimum wage to BGN 850, adopting the concept of ‘energy poverty’ and supporting those families who are energy poor. A ceiling on the prices of energy carriers, motherhood to follow the growth of the minimum wage and a strong social package - youth politics and politics for children," she pointed out.

In response to BSP's demand that the caretaker government submit a new budget for next year, President Rumen Radev reminded that Galab Donev's cabinet is working on a budget proposed by Kiril Petkov's government. And he denied the accusations.

"I also do not accept that there will be no salaries, no pensions and the caretaker government condemns to hunger, cold, misery and darkness. All social benefits are preserved. I hope that here both the National Assembly and the government will work together with one goal - to do everything possible so that the laws and amendments, decisions and policies are in favor of the people. I think the good tone should be maintained and there will be solutions".

The president asked Ninova why she keeps talking about Gripen and F-16 bids and opposes social policy to national security. He emphasized that no decision has been made so far, and the final word rests with the National Assembly.

Kornelia Ninova: “The caretaker government submitted an investment proposal for new F-16s, this gave us reason to claim that right now is not the time for such a thing.”

Rumen Radev: “These are not our suggestions, but yours. Because the caretaker government clearly announced that there will be continuity in the field of security. During your government came the proposal for the new F-16s from the USA.”

Ninova specified that both in the government and in the parliament BSP voted against this decision.

"This also explains why the government was unable to retain power, but that is a different topic," commented the president.

After the meeting, Ninova stated that BSP will not support a government with a mandate from DPS and "Vazrazhdane".