Donald Trump has officially entered the 2024 US presidential race 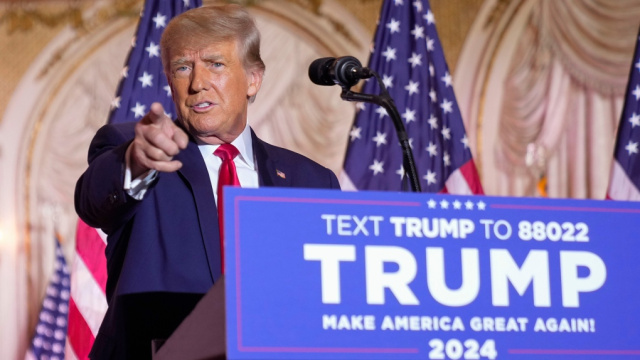 Donald Trump has announced his candidacy for the White House in the 2024 election, world news agencies have reported.

"To make America great and glorious again, tonight I am announcing my candidacy for president of the United States," Trump told supporters at his Mar-a-Lago resort in Palm Beach, Florida, which he owns.

Trump's announcement comes just a week after Republicans' lackluster performance in the midterm congressional elections and will force the party to decide whether to embrace a candidate whose refusal to accept defeat in 2020 has brought American democracy to the brink.

"I'm running because I believe the world has yet to see the true glory of what this nation can be. We will once again put America first," he added.

Trump is entering the race at a time of political vulnerability, AP said. Far from the undisputed leader of the party, he is now under fire from some of his own allies who say it is time for Republicans to look to the future. Florida Gov. Ron DeSantis has emerged as a rising star among Republicans.

Trump's decision paves the way for a potential rematch with Biden, who has said he intends to run for re-election despite concerns from some in his party about his age and low approval ratings. Trump and Biden were already the oldest presidential candidates in history when they ran in 2020. Trump is now 76 and Biden will soon turn 80.

If ultimately successful, Trump would be only the second US president in history to serve two non-consecutive terms, following Grover Cleveland's victories in 1884 and 1892.