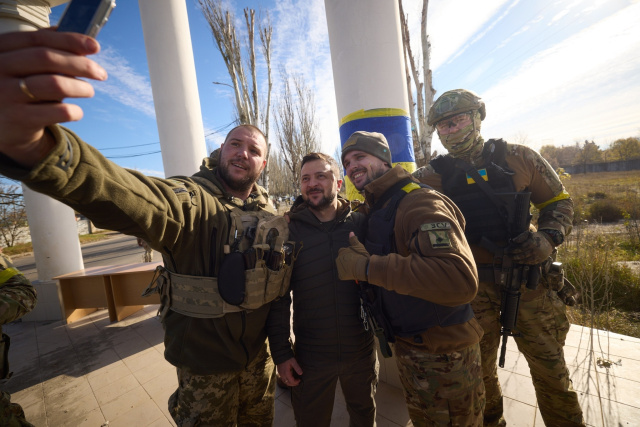 Ukrainian President Volodymyr Zelensky arrived in liberated Kherson. Footage of his stay in the city, which has been under occupation since the first days of the war, was released by Nexta.

"We are making progress," the head of state declared in front of a line of military personnel, in front of the regional administration building on the central square in Kherson. "We are ready for peace, peace for our entire country," Zelensky said, quoted by UNIAN.

From Kherson, Zelensky thanked NATO and other allies for their support in the war against Russia and said the US delivery of the High Mobility Artillery Systems (HIMARS) had been of great importance to Kyiv.

Parents with children had also gathered on the main Kherson square. According to the footage on the Internet, civilians are waving the Ukrainian flag, some are wrapped in it. "I am really happy, it can be seen from the reaction of the people that it is not staged," the president commented to journalists. When asked in which direction the VSU could counterattack further, Zelensky answered: "Not towards Moscow. We are not interested in the territories of other countries." A little later, the Ukrainian leader presented military and state awards to servicemen from the Ukrainian Armed Forces. Literally a few minutes before the arrival of Volodymyr Zelensky, people in the city center heard shelling nearby. After the president finished his statement, the rumble of artillery fire could be heard over the city.

The trip to Kherson is really dangerous for Volodymyr Zelensky, as the city is within the range of Russian artillery, the Ukrainian presenters commented on the air, who fell into euphoria after the leaked footage from Kherson. Local media reported that the president spoke with citizens and journalists.

The Kremlin reacted to arrival of @ZelenskyyUa to liberated Kherson:

"We leave that without comments. You know it's the territory of the Russian Federation", says Putin's press secretary Dmitriy Peskov.

I was right! Russia protests against Zelenskyy's arrival to Kherson! pic.twitter.com/1il47egSQq

Just an hour before Reuters reported that the Ukrainian leader had been seen in Kherson, Russian media published possible scenarios for Zelensky's visit to the liberated city. The pro-Kremlin portal Svobodnaya Presa came up with the headline: "Zelensky is warned not to travel to Kherson and climb the TV tower with a flag. If the comedian president does not listen to the intelligence, he will have himself to blame," Svobodnaya Presa adds. The publication also "develops" several options, expecting the president to leave Kyiv at night, not in a motorcade, but in ordinary cars, and not necessarily military - probably "Niva" or something like that. The only distinguishing feature of such a "Niva" would be that it would fly at top speed. It is assumed that during such trips, in addition to the SBU, Zelensky is also guarded by British commandos.

Read more from the 264th day of the war in Ukraine.