Day 264 of the Invasion of Ukraine: Russians committed over 400 War Crimes in the Kherson region 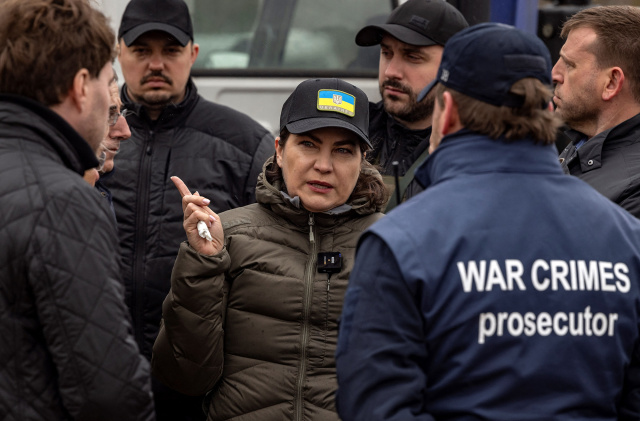 Zelensky: Active work is being done to restore the Kherson region

Ukrainian President Volodymyr Zelensky has accused Russian soldiers of committing war crimes and killing civilians in Kherson region, parts of which were seized by the Ukrainian army last week after Russia withdrew. Utility companies are working to restore critical infrastructure mined by fleeing Russian forces, with most homes in Kherson still without electricity and water. Ukrainian authorities have imposed a curfew and restricted travel in and out of Kherson as the security situation remains tense.

"Investigators have already documented more than 400 Russian war crimes, bodies of both civilians and soldiers have been found. In the Kherson region, the Russian army left behind the same brutality as in other regions of our country, where it managed to invaded. We will find and bring to justice every murderer. No doubt about it."

In his traditional late night video address, Zelensky added that in 226 settlements work is being done on the "stabilization and restoration of the law" after the end of the Russian occupation. This affects more than 100,000 residents. Arrests of Russian soldiers and mercenaries also continue. Ukrainian forces are working to restore internet and TV links, and electricity and water supplies will be restored "as soon as possible". The Ukrainian president also announced that the fighting in the Donetsk region in eastern Ukraine is as intense as it has been in recent days, and Russian attacks have not stopped.

Authorities in Kherson banned the use of river transport from November 13 to 19, out of concern that Russian troops, now entrenched on the opposite bank of the Dnieper River, might resume shelling. Local residents who have fled the area have been warned not to return until their homes are checked for mines. Kherson Governor Yaroslav Yanushevich advised citizens to avoid crowded places and stay away from the city center on Monday because the military will clear the area of ​​mines. A curfew has been announced - in the evening from 17:00 to 08:00 in the morning.

Nearly 45,000 families have been left without water in Ukraine after Russian shelling damaged a power line at a water supply pumping station in the Dnipropetrovsk region, the head of the regional military administration Valentin Reznichenko revealed on Monday.

Over the weekend, Ukrainian officials reported on the attack in the region, noting that Russian forces had fired more than fifty shells into the area, leaving two injured and 40 residential buildings destroyed.

Ukraine has established over 400 war crimes in the Kherson region

Over 400 war crimes have been established in the areas of the Kherson region liberated from the Russian occupation. This was stated by Ukrainian President Volodymyr Zelensky in his regular evening address.

According to him, the investigators found bodies of dead civilians and military personnel. Since the start of the war, mass graves have been found in Bucha, Izyum and Mariupol, with Kyiv blaming Russian forces for the atrocities.

Moscow denies that it carried out attacks against civilians. Ukrainian authorities have imposed a curfew and travel restrictions in and out of Kherson. Intense fighting continues in the Donetsk region.

Report: Winter pause in Ukraine conflict may last up to 6 months

The suspension of hostilities in the Russian military operation in Ukraine due to winter may last up to six months, according to The New York Times.

Rain and soft soil in late November will slow down the movement of both Ukrainian and Russian troops. Possible heavy snowfall and cold weather could also slow down operations on the battlefield, the newspaper said. "You're already seeing the sloppy weather in Ukraine slow things down a little bit. It's getting really muddy, which makes it hard to do large-scale offensives," US Under Secretary of Defense for Policy Colin Kahl was quoted as saying by the newspaper.

Meanwhile, the conflict is expected to enter a new phase due to a forced pause in the movement of troops, the report said. The Russian military will focus on strikes against Ukrainian infrastructure.

In turn, the Ukrainian troops, as noted by Seth Jones, vice president at the US Center for Strategic and International Studies, are going to press forward with subversion attacks on Russian lines.

A US official, cited by the news outlet, said it is important for Washington to take advantage of the winter halt to increase arms supply to Kyiv.

This comes days after reports emerged that the Biden administration is "privately" encouraging Kyiv to demonstrate a readiness to negotiate with Russia, The Washington Post reported, citing people familiar with the discussions.

Mediation began at the end of February this year after the start of the war in Ukraine. The last round of the negotiations concluded in Istanbul on March 29. The talks have since stalled despite efforts by the United Nations.

As per the newspaper, the US does not want Ukraine to start negotiations with Russia, but, instead, aims to ensure that Kyiv has the support of other countries. "Ukraine fatigue is a real thing for some of our partners," one US official told The Washington Post.

Concerns are mounting in parts of Europe, Africa, and Latin America, as food and fuel prices are rising amid Russia's ongoing special operation in Ukraine.

Earlier in September, Russian President Vladimir Putin said that Moscow was still open to talks with Kyiv and called on Ukraine to stop the hostilities. Ukrainian President Volodymyr Zelensky, in turn, said that Kyiv was ready for dialogue with Moscow, but only if another president came to power in Russia.

The Kremlin responded that Moscow would wait for a change in the stance of Ukraine's current president or his successor.

To mark the liberation of the southern city of Kherson, Ukrainian railways yesterday began offering token train tickets to cities that remain under Russian control, with the promise that they can be used after their liberation, Reuters reported.

On Friday, jubilant locals welcomed Ukrainian troops who reached the center of Kherson after Russia abandoned the only regional center in Ukraine it had seized since the start of its invasion in February.

"Today (yesterday) you can order tickets for the first three trains from Kyiv to five cities: Kherson, which has already been liberated from occupation, as well as to Mariupol, Donetsk, Luhansk and Simferopol," announced the operator of Ukrainian railways in " Telegram".

"The ticket can be bought and kept as a symbol of faith in the armed forces and the liberation of Ukraine from the occupiers," the message said.

"As soon as traffic is restored, railway officials will send a message with the date and place," Ukrainian Railways also announced.

Mariupol is a port city on the Sea of ​​Azov and the center of the Ukrainian metallurgical industry. It was occupied by Russian forces in May, after a nearly 4-month siege.

The two largest cities in eastern Ukraine, Donetsk and Luhansk, came under the control of pro-Russian separatists in 2014, and Simferopol is the second largest city on the Crimean peninsula, annexed by Russia also in 2014.

ISW: Any delay or ceasefire in Ukraine will benefit Russia

Any attempt at a ceasefire or cessation of hostilities at this point would be largely in Russia's favor, according to analysts at the Washington-based think tank Institute for the Study of War (ISW) on the possible behavior of both sides in the conflict after the retreat of the Russian army from Kherson, the only large and regional center that was in the hands of Moscow since the beginning of the so-called Special Military Operation.

"Therefore, a cessation or prolonged delay in combat operations over the next few months is highly unlikely. The Russians are categorically not trying to establish and strengthen defensive positions along the entire line, but rather are resuming offensive operations in the Donetsk region. The Ukrainians will almost certainly continue their counteroffensive operations that are already underway. Both sides are already fighting in very muddy conditions. They probably won't stop fighting when the ground freezes over in winter and becomes even more conducive to large-scale mechanized maneuver warfare. The battle is more likely to intensify than to weaken as temperatures drop," said the author of the latest ISW report, Frederic Kagan.

If anyone should call for a ceasefire in their own interest, it should be Putin, the institute believes. The Russian leader should realize that he needs to give his forces time to recover and allow time for the mobilized people who flow into the theater to integrate into their units, train and prepare for a serious battle and try to prevent the Ukrainians from taking advantage of their emotional upsurge after recent victories.

The fact is, however, that Putin continues to push his generals on the offensive under these circumstances, and this is a serious mistake from a military point of view, according to ISW. The Kremlin master is trying to show his toughness to the hawkish faction led, at least publicly, by Wagner's financier Yevgeny Prigozhin. That is why Putin is unlikely to call for a ceasefire.

In this situation, Kyiv should make the most of Moscow's mistakes and listen to Napoleon's advice: “Never interrupt your enemy while he is making mistakes.”

ISW emphasizes that Ukraine has by no means liberated the minimum territory it needs for its future security and economic survival. The city of Melitopol and its surrounding areas, the Zaporizhzhia Nuclear Power Plant, the terrains on the left bank of the lower reaches of the Dnieper River, and the territory of Donetsk and Luhansk Oblasts are vital terrain for Ukraine, ISW continues to assert, as in previous reports. Discussions about the future of Crimea and other Ukrainian territories illegally occupied by Russia after 2014 are premature. Ukraine needs to free up tens of thousands of square kilometers outside these zones if it wants to be able to defend itself against future Russian attacks and restore a functioning economy, according to Washington analysts, who add that inertia is an important factor in the war, which Ukraine already has and, of which, Kyiv and its partners should make the most of it.

Ukraine's success in Kherson was largely due to the Ukrainian armed forces' innovative use of the US-supplied HIMARS precision missile system to disrupt Russian supplies, the latest ISW report concluded in particular.