Day 263 of the Invasion of Ukraine: Russian forces have Destroyed Key Infrastructure in Kherson after Fleeing 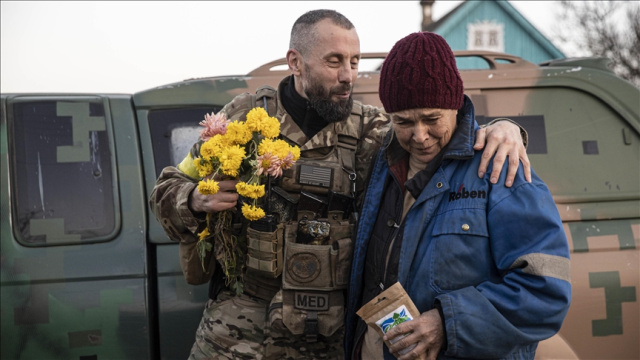 By January, the Ukrainian Armed Forces will liberate Mariupol and Melitopol, then it's Crimea's turn

After Kherson was liberated from the occupiers, the Ukrainian military will be able to strike with HIMARS on Russian positions on the outskirts of Crimea.

This was written on Twitter by the former commander of US forces in Europe, General Ben Hodges.

According to him, this could weaken the Russian defense and influence the further de-occupation of the peninsula.

"Soon the HIMARS will be firing from Kherson. The approaches to Crimea are at arm's length. This will weaken the Russian defenses, while a counteroffensive on the 'left wing' will capture Mariupol and Melitopol by January. Then begins the decisive phase of the campaign - the liberation of Crimea," Hodges wrote.

The American general also stressed that supplying Ukraine with long-range ATACMS missiles could play an important role in the de-occupation of Crimea.

The President of Ukraine, Volodymyr Zelensky, said that Russian forces destroyed key infrastructure in Kherson before fleeing from there, world agencies reported.

"Russians everywhere have the same goal, to humiliate people as much as possible. But we will restore everything, believe me," added Zelensky in his midnight address.

Zelensky said Ukrainian forces also defused 2,000 explosives, shells and mines in the city. He announced that Ukrainian forces have recaptured control of nearly 60 settlements in the Kherson region.

About 200 Ukrainian police are now stationed in Kherson to document, as national police chief Igor Klymenko said, the crimes of the Russian occupiers and to set up road checkpoints.

ISW: The hawks in the Kremlin have already raised their sights on Putin

The withdrawal of occupation troops from Kherson is causing a rift between Russian President Vladimir Putin and the "hawks" faction in the Kremlin.

According to a new report by the Institute for the Study of War (ISW), it is increasingly difficult for Putin to appease a section of the highly ideological pro-war electorate due to the inability of his armed forces to achieve his maximalist goals of overthrowing the Ukrainian government and conquering all of Ukraine.

Far-right propagandists like Vladimir Solovyov are increasingly demanding that the Kremlin and the military high command fulfill all their promises to destroy Ukraine.

The loss of Kherson is another defeat for Putin in the eyes of his supporters after the bombing of the Kerch bridge.

Analysts call the wave of criticism against Putin "almost unprecedented." This probably has something to do with the increased censorship on television, with many propagandists missing or downplaying the implications of withdrawal.

At the same time, the defeat of the regular troops and Putin in Kherson further strengthened the influence of the Wagnerites and their leader Prigozhin.

Already on November 7 - a few days before the announced withdrawal of troops from Kherson - Putin's propagandists began preparing the Russians for defeat. The Russian media were allowed to call the direction to Kherson "the most difficult", since Ukraine and NATO had thrown all their forces there, and therefore there could be a "huge bloodshed".

Kherson and the right bank of the Kherson region were liberated on November 11. Thus, Russia lost the only regional center that it managed to capture after the start of the full-scale war on February 24.

ISW experts believe that in all cases, Putin's credibility was at risk.

Russia and Iran are strengthening political and economic cooperation

Russian President Vladimir Putin and his Iranian counterpart Ebrahim Raisi held a telephone conversation in which they discussed deepening cooperation between the two countries in politics, economy and trade, Reuters and TASS reported, citing the Kremlin.

"A number of topical issues from the bilateral agenda were discussed, with an emphasis on further strengthening of interaction in the political and trade-economic sphere, including the transport-logistics sphere. An agreement was reached to activate contacts between the relevant Russian and Iranian departments," the Kremlin press service announced today, without specifying when the conversation took place.

Russia has been increasing efforts to build ties with Iran and other non-Western countries since it invaded Ukraine in February. Kyiv and the West accuse Moscow of using Iranian drones to strike Ukrainian energy facilities. A senior Russian security official visited Tehran this week and met with Iranian leaders, and the two countries pledged to build closer ties, according to Reuters.

US Secretary of State Antony Blinken met with Ukrainian Foreign Minister Dmytro Kuleba in Phnom Penh on Saturday and discussed Russia's continued attacks on critical infrastructure and the importance of the Black Sea Grain Initiative.

"The Secretary discussed the United States' unwavering commitment to assist Ukraine in mitigating the effects of Russia's continued attacks on critical infrastructure, including with accelerated humanitarian aid and winterization efforts," the US State Department spokesperson Ned Price said in a statement. Price said that two ministers reaffirmed the importance of the Black Sea Grain Initiative's renewal before it expires on November 19 and its role in supporting global food security.

"They also discussed Ukraine's continued effectiveness on the battlefield, and the Secretary reiterated that the timing and contents of any negotiation framework remain Ukraine's decision," he added.

This comes days after reports emerged that the Biden administration is "privately" encouraging Kyiv to demonstrate a readiness to negotiate with Russia, The Washington Post reported, citing people familiar with the discussions.

Mediation began at the end of February this year after the start of the war in Ukraine. The last round of the negotiations concluded in Istanbul on March 29. The talks have since stalled despite efforts by the United Nations.

According to the newspaper, the United States does not want Ukraine to start negotiations with Russia, but, instead, aims to ensure that Kyiv has the support of other countries.

"Ukraine fatigue is a real thing for some of our partners," one US official told The Washington Post.

According to the newspaper, concerns are mounting in parts of Europe, Africa, and Latin America, as food and fuel prices are rising amid Russia's ongoing special operation in Ukraine.

Earlier in September, Russian President Vladimir Putin said that Moscow was still open to talks with Kyiv and called on Ukraine to stop the hostilities.

Ukrainian President Volodymyr Zelensky, in turn, said that Kyiv was ready for dialogue with Moscow, but only if another president came to power in Russia.

The Kremlin responded that Moscow would wait for a change in the stance of Ukraine's current president or his successor.