Day 262 of the Invasion of Ukraine: Ukrainians celebrate the Liberation of Kherson 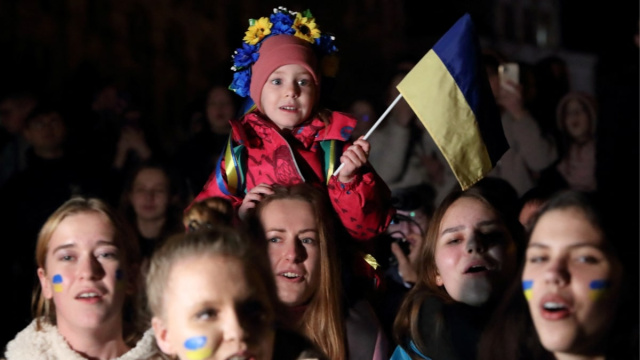 Over the past 24 hours, Russia has lost 800 soldiers killed, and thus the losses of the Russian invaders since the beginning of Russia's invasion of Ukraine exceeded 80,000 casualties, according to the summary of the General Staff of the Ukrainian Army as of the morning of November 12, quoted by the UNIAN agency.

In the south alone, Ukrainian soldiers eliminated 55 invaders, two tanks, three self-propelled howitzers and an ammunition depot. "Our aviation twice carried out strikes against the accumulation of enemy equipment in the Berislav and Kherson regions. Missile and artillery units carried out 34 fire strikes in areas of concentration of enemy manpower and equipment. The confirmed losses of the enemy are 25 Russian soldiers, 3 self-propelled large caliber howitzers Msta-S, "6 units of equipment. An enemy ammunition depot in the Kakhovka area was also destroyed. As a result of precision strikes by the defense forces on the headquarters of the Russian occupation troops in the village of Krasni Mayak, Kherson region, more than 30 invaders were killed, 2 tanks and 4 trucks were destroyed," was said in a statement from the Southern Operational Command.

Meanwhile, in the enemy ship group in the Black Sea, which now consists of 21 ships, 2 surface missile carriers are on combat duty. The total number of ships ready to work with the "Caliber" missiles is 16.

Forty-five Ukrainian soldiers have been set free in a prisoner exchange with Russia, Al Jazeera reported citing the Ukraine presidential office on Friday.

The presidential office also stated that the bodies of two killed Ukrainian soldiers have also been repatriated. In a tweet, the official, Andriy Yermak wrote, "Another POWs swap. We managed to free 45 VSU soldiers and get back to Ukraine the bodies of two fallen defenders. Thanks to the Coordinating Staff on the Treatment of Prisoners of War. We are going on. Our people will return home."

No further details were provided regarding the prisoner exchange process.

Earlier in July, around 40 prisoners of war were killed and 75 were killed near Olenivka in the Donbas region.

This attack came a day after Ukraine and Russian ministers signed an agreement, brokered by the United Nations and Turkey in Istanbul, to allow grain exports from Ukrainian Black Sea ports aimed at easing the global food crisis sparked by the war.

The Russia-Ukraine conflict which started eight months ago has jolted Europe. The European Union and its Member States have shown solidarity with people fleeing the war.

The EU has immediately mobilized support to the Ukrainian government to keep its essential functions going, on top of the emergency and humanitarian assistance, and military aid provided to Ukraine.

On February 24, Russia began a special military operation in Ukraine after the Donetsk and Luhansk people's republics requested help defending themselves. The Russian Defense Ministry said the special operation targets Ukrainian military infrastructure only and the civilian population is not in danger.

Ukrainians celebrate the return of the key city of Kherson

Ukrainian soldiers were welcomed in Kherson by jubilant residents after Russia said it had fully withdrawn from the key southern city. Video footage showed local people in the streets waving Ukraine's national flag and chanting as Kyiv's troops arrived.

"Today is a historic day!", "We are taking back the southern regions of the country, we are taking back Kherson!". This was stated by Ukrainian President Volodymyr Zelensky in his traditional evening video address. Yesterday afternoon, the Ukrainian army announced that it had entered Kherson.

Zelensky specified that the special forces entered the city and called on the Russian soldiers in the area to surrender, because this is their only chance for salvation:

"I want to specifically address those Russian soldiers, mercenaries and collaborators who were abandoned in Kherson and other southern cities. Your only chance for salvation is to surrender to Ukrainian captivity. We guarantee that we will treat you in accordance with the law and international norms. And to those Russian soldiers who changed into civilian clothes and hid somewhere, I mean - that makes no sense. Don't drag it out! Either way, we will find you. Voluntary surrender into Ukrainian captivity is the only opportunity for all occupiers!"

Actions on demining the places left by the Russian forces will begin as soon as possible, the Ukrainian president also said.

The Kremlin announced that despite the withdrawal of troops, the legal status of the Kherson region does not change.

The administrative capital of the Kherson region is temporarily becoming the city of Henichesk, announced Alexander Fomin, spokesman for the deputy chairman of the Russian authorities in the region. The city is located in its southern part on the coast of the Sea of ​​Azov.

In September, the Russian occupation authorities organized a referendum on the separation of the region from Ukraine and its accession to Russia. And in October, President Vladimir Putin signed a decree declaring Kherson region a subject of the Russian Federation.

The United States welcomed the recapture of the city of Kherson from the Russian occupiers.

"It looks like the Ukrainians have just won an extraordinary victory where the only regional capital that Russia had captured in this war is now back under the Ukrainian flag -- and that's a pretty remarkable thing," said national security adviser Jake Sullivan.

Russia was preparing tests of a torpedo with a nuclear warhead, but the exercise failed

Russia was preparing to test a Poseidon nuclear warhead torpedo, but at the last minute the ships left the test site.

Among the vessels that participated in the training was the Belgorod cruise missile submarine modified for special operations, CNN and UNIAN reported, citing a senior US official.

The ships have returned to port without being tested. Most likely, the Russians encountered technical difficulties.

Washington did not rule out that Russia could try to test the torpedo again, but emphasized that the water in the area of ​​the test will soon begin to freeze and become covered with ice.

Russia may try to carry out a massive missile attack against Ukraine on November 15-16, when the G-20 meeting will be held in Bali, said the spokesman of the Air Force Command of Ukraine Yuriy Ignat, quoted by UNIAN. Russia is very fond of symbolic dates, and the G20 meeting fits into this paradigm, he explained.

At the G20, London and Brussels will try to isolate Russia

The UK and EU will boycott speeches by the Russian delegation at the G20 meeting in Indonesia next week. The "Daily Telegraph" newspaper, citing EU representatives, reported that London and Brussels intend to seek isolation of Moscow at the forum. "The UK is generally not interested in coordinating foreign policy with the EU, but on this issue we have the same goal," the publication quoted a representative of the EU's foreign service as saying.

The United Kingdom and the European Union during the summit will call on the Russian Federation to de-escalate the conflict in Ukraine, the newspaper claims. The EU will make it clear that negotiations for a peace settlement must take place on terms acceptable to Kyiv.

At the same time, European capitals believe that any call for Russia to de-escalate may not be reflected in the summit's final declaration because of the position of Moscow and Beijing. The representative of the EU described Russian-Chinese cooperation as "boundless friendship".

The G20 meeting will be held on November 15-16 in Bali. Vladimir Putin will not go to this meeting, the Russian delegation will be led by Foreign Minister Sergey Lavrov.