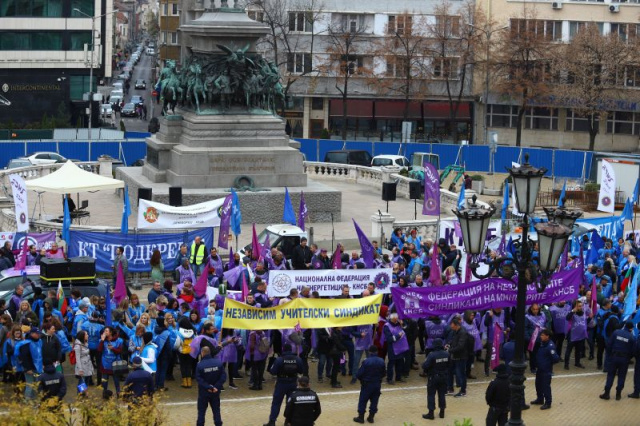 Protests of various organizations, having social demands, will block the center of Sofia today. A trade union motorcade is also coming up.

The protesters are demanding to shorten the period from the expiration date of an expert decision to the new decision to 45 working days. They also insist on the availability of concomitant therapies.

Their protest will last until 12 o'clock.

At 11 o'clock, another protest begins: on the yellow stones in front of the National Assembly. It is organized by the trade unions KNSB and KT "Support" with a request to increase incomes, adoption of a budget for 2023 (which would avoid the risk of freezing the minimum wage at its current level despite inflation), support for energy-vulnerable people on the eve of the winter season, protection of trade union rights of workers.

Minutes before 11:00 a.m. several dozen protesters gathered in front of the parliament building, including from the teachers' union and workers in "Mini Maritsa-East". The demands - described in a joint declaration of the two unions - will be submitted to the National Assembly.

The protesters will include people from all over the country, including medical workers. President of KT "Podkrepa" Dimitar Manolov expects over 1000 cars to be involved. "There is a need to increase people's incomes because their standard of living has increased. Period," the union leader told BNR.

In order to join the protest, at 8:30 a.m. 20 cars left Blagoevgrad - BGNES reports. The protesters are from the city hospital, the teachers' union and the district road department.

"We want decent pay for our work, we also want privileges for food, overtime work, clothing. The duty in the department is busy due to the presence of major road arteries, we serve two areas, and we receive a minimum wage for this work," said Anka Chergarska, medical nurse in the Emergency Department of the Medical Center Blagoevgrad. According to her, the payment of BGN 800 for this tension is "too little".

"The salary of medical personnel is currently minimal, we are also fighting for better working conditions, I hope we will succeed," added Yordanka Yordanova, also a nurse from the Blagoevgrad hospital.

"We want a 20 percent increase in the uniform expenditure standard for education, we also join all the demands of the Confederation of Independent Trade Unions to increase the income of all working people to cover inflation," Bonka Ichkova, regional coordinator of SBU, told BGNES.

Cars drove off in the fog towards Sofia with "Protest" stickers on the windshield.