The Russian Army retreats from Kherson 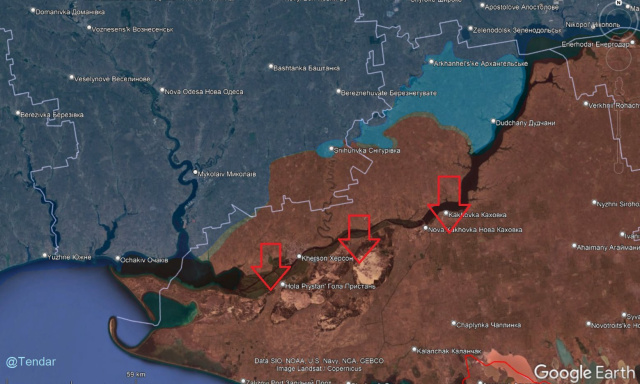 Russian Defense Minister Sergei Shoigu announced that Russian troops were withdrawing to the left bank of the Kherson region.

The statement was broadcast by Kremlin propaganda channels.

"The life and health of the servicemen of the Russian Federation is always a priority," he said.

The Russian Defense Minister announced the decision to withdraw the army from the left bank of the Dnieper after listening to a report by the commander of Russian troops in Ukraine, General Sergey Surovikin. The senior officer announced that the city of Kherson and the settlements around it cannot be supplied and function normally, as they are under continuous artillery fire from the Ukrainian Armed Forces (VSU).

Moment Surovikin and Shoygu admit defeat in the Kherson direction and announce the withdrawal of troops. pic.twitter.com/10UZgVuIcm

"Proceed with the withdrawal of troops," Shoigu said.

Earlier today, on the right bank of the Dnieper River, it became clear that the Russians had begun to leave a number of populated areas and blow up bridges, thereby hindering the advance of the Ukrainian Armed Forces and minimizing the risk of being hit in the back.

The comments in the Russian Telegram channels under the news of the retreat from Kherson are merciless. Most of the users think that this is an extreme defeat and disgrace for the "special military operation".

"Come on, let's give them Donetsk and Crimea and be done with it," wrote some of the Russian users. Still others say that they are now fully convinced that the Russian army is really not well prepared.

Kherson was the only major Ukrainian regional center that the Russian army was able to capture after the start of full-scale military aggression on February 24, 2022. The occupiers' quick breakthrough there is believed to be due to the betrayal of senior Ukrainian military personnel responsible for the city's defense.

Read more from the 259th day of the war in Ukraine.