Day 259 of the Invasion of Ukraine: Fierce fighting in the Ukrainian region of Donetsk 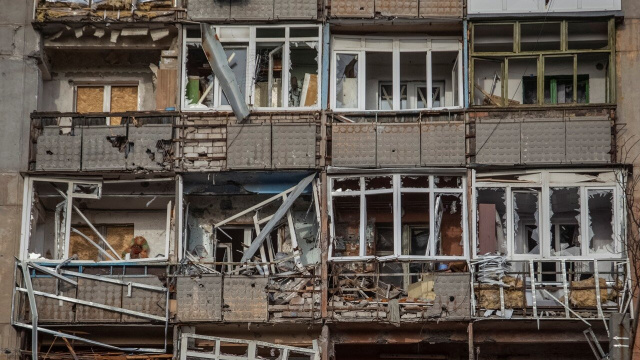 Russia and the US renew inspections of their nuclear weapons

The United States and Russia will soon resume talks on inspections under the New START nuclear arms reduction treaty, which were suspended before the war in Ukraine, US State Department spokesman Ned Price said, as quoted by Reuters.

Price said the Bilateral Consultative Commission (BCC), the implementation mechanism for the last remaining arms control agreement between the world's two largest nuclear powers, would meet "in the near future."

In August, Russia suspended cooperation with treaty inspections, saying travel restrictions imposed by Washington and its supporters on Ukraine as part of sanctions against it were interfering with the fulfillment of treaty commitments.

"We have made it clear to Russia that the measures imposed as a result of Russia's unprovoked war against Ukraine do not prevent Russian inspectors from conducting inspections in the United States under the New START Treaty. So we hope that the BCC meeting will allow us to continue with those checks," Price said.

The new START, which went into effect in 2011, limits the number of strategic nuclear warheads the United States and Russia can have and the deployment of surface- and submarine-based missiles and bombers to deliver them.

The commission, which must meet twice a year, last met in October 2021, shortly before Russia began moving forces to its border with Ukraine.

Price said Washington hoped for a "constructive session" but did not specify the date or location of the meeting.

Reuters cited a person familiar with the matter as saying the committee is expected to meet in Cairo.

"We are realistic about what dialogue between the United States and Russia can lead to and what it can achieve," Price said.

At the same time, he pointed out that the US has made efforts to ensure that Moscow and Washington continue to communicate and maintain dialogue with each other despite the worsening of relations due to the war in Ukraine.

Russia's Kommersant newspaper reported on Tuesday that the renewed talks could take place in the Middle East, adding that Moscow no longer sees Switzerland, the traditional venue for the meetings until now, as a neutral country after it joined Western sanctions against Russia over the war in Ukraine.

US National Security Adviser Jake Sullivan has been involved in confidential talks with senior Russian officials aimed at reducing the risk of a wider war on Ukraine, a source familiar with the talks said on Monday.

State Department: Regardless of election results, the US will support Ukraine

The US administration is convinced that US support for Ukraine will continue to be steadfast and firm even after the midterm elections.

This was stated in a telephone briefing for journalists in Brussels by Karen Donfried - Assistant Secretary in the Bureau of European and Eurasian Affairs at the State Department.

This is how she answered a journalist's question whether after this election a change of course can be expected if the Republicans get a majority. Moreover, some of the party's leaders questioned the continued support.

The conversation with Karen Donfried took place as Americans voted.

"As an American living in a very polarized country, I have had a very positive impression of the depth and breadth of bipartisan support for Ukraine during the conflict," she noted.

Donfried also recalled the words of Jake Sullivan, President Joe Biden's security adviser, during his visit to Kyiv last week. Then Sullivan assured that the US will continue to support Ukraine in everything with help in the spheres of security, economy and humanitarian issues.

“Yes, there are indeed some voices in Congress that are hinting and offering other points of view. But Congress represents many, many different opinions. And I think the vast majority of congressmen, Republican and Democrat, are clear about their support for Ukraine. I think that in any scenario, President Biden is committed to working bipartisanly, as he has in the past, to support Ukraine. So I think our support will continue to be ironclad," summarized Karen Donfried.

Fierce fighting in the Donetsk region of Ukraine

Fierce fighting is taking place in the Donetsk region of Ukraine around the towns of Bakhmut, Soledar and Avdeevka, announced Ukrainian President Volodymyr Zelensky.

"We will not give up a single centimeter of our territory," he is categorical.

"The Russians dismantled the antennas of the mobile operators, blew up a power line and took equipment from a solar power plant," they said in their messages.

The Moscow-appointed administration reports serious fighting in the Mykolaiv region. The Ukrainian army has launched new attacks, but for now Russian forces are holding their ground.

In his traditional video address, Ukrainian President Volodymyr Zelensky said that about 4 million people are without electricity. Planned power outages will affect the entire country today.

In recent weeks, Russia has been attacking Ukraine's energy infrastructure with Iranian drones. TASS reported that the Secretary of the Security Council of Russia Nikolai Patrushev has arrived in Tehran. The visit is believed to be related to a possible Iranian ballistic missile deal for Russia, as Western military experts speculated a few weeks ago. The Kremlin is trying to secure the supply of ammunition, bypassing Western sanctions.

Patrushev's visit to Iran also comes amid reports that the Iranian regime is seeking Russian help to quell protests following the killing of 22-year-old Mahsa Amini.

Deputy head of the Pentagon: Moscow has lost half of the tanks in service with the Russian army

Russia has lost probably half of its main battle tanks in service with the Russian army in the fighting in Ukraine and has used up most of its precision weapons. This was stated by US Deputy Defense Secretary Colin Kahl, quoted by CNN.

"Putin has failed, Russia will come out of this war weaker than it was," Kahl told reporters. According to the deputy head of the Pentagon, the Russian Federation has given tens of thousands of casualties since the beginning of the war in February, which is much more than the loss in manpower of the Soviet Union in the war in Afghanistan. Earlier, the Chief of the General Staff of the Armed Forces of Ukraine, General Valery Zaluzhny, made a similar analogy with the Russian planes destroyed in Ukraine and the losses of Soviet aircraft military equipment in Afghanistan.

"They've probably lost half of their main battle tanks in the entire Russian army... They've used up most of their precision munitions in Ukraine, and sanctions and export controls will make it very difficult for them to rebuild their military to pre-war levels." Kahl thinks.

“Putin entered this war trying to destroy Ukraine as an independent, sovereign democratic state. He failed and that will not change. A sovereign, independent, democratic Ukraine will endure," emphasized the official representative of the US military department.

At the same time, British intelligence announced that in the coming months, the Russian Federation will not have air superiority in the war in Ukraine. As reported by Ukrinform, NASAMS air defense systems and Aspide anti-aircraft missile systems arrived in Ukraine this week.

Last week, at a joint briefing with the Minister of Foreign Affairs, European Union and Cooperation of Spain José Manuel Alvarez Bueno in Kyiv, the Minister of Foreign Affairs of Ukraine Dmytro Kuleba announced a new package of military aid from Spain, which includes a battery of the anti-aircraft missile Aspide complex and missiles for it, four Hawk anti-aircraft systems, anti-tank missile systems, guns and shells for them.

A video posted on Zelensky's Telegram channel also shows the president of Ukraine presenting Penn with the Ukrainian Order of Merit.

Sean Penn, who is known for his political activism as well as his films, fled Ukraine in March while filming a documentary about the conflict.

He later said he was considering joining Ukrainian forces to fight against Russia.