Vice President of Bulgaria: It is Unacceptable to Change History for Geopolitical Interests 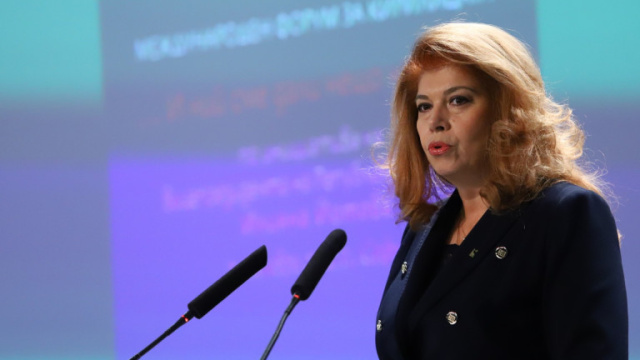 “We oppose all attempts - both from the East and from the West - to change our history”. This is what Vice President Iliyana Yotova said during the International Forum on the Cyrillic alphabet, which she organized: "... We have also given something to the world."

Iliana Yotova emphasized that the presidential institution recognizes the scientific discoveries of Bulgarian scientists and their persistence in searching for the truth about the rich Bulgarian culture. "It is inadmissible today that history be changed, altered, serving geopolitical interests," she said.

“Out of respect for history and our heroes of the past, I will not mention the names of the authors of lies”, Yotova added. She is adamant that history should not be used for political slogans, and that it is very important that scientific discoveries and achievements reach a larger audience.

The vice-president noted that the tendency for the Bulgarian language to be displaced by facts that have nothing to do with science is dangerous. According to her, the Cyrillic alphabet is an emblem of Orthodoxy, and it also proves Bulgaria’s contribution both in Europe and in North Asia. “The new Slavic civilization found its heyday in the Middle Ages, but also had ups and downs in the following centuries”, Yotova said.

The vice president also stated that the world has seen aggression in history and, unfortunately, in our days as well. “There is no statute of limitations for our debt to the cultural heritage of all of us, the Slavic peoples”, Yotova said, stressing that Bulgarians gave letters and writing to Europe more than 12 centuries ago.

The vice-president pointed out that the prospects for Cyrillic in the new digital era should be considered at the forum. "This is a forum for dialogue, discussions and new projects," Yotova explained and added that the ambition is to hold the forum every two years.

“We cannot talk about the Cyrillic alphabet without honoring the contribution of the holy brothers Cyril and Methodius and their students”, President Rumen Radev said in a video address. According to him, thanks to the old Bulgarian literature that sprouted in Preslav and Ohrid, Bulgaria became the second center of civilization after Byzantium.

"Having become our most valuable gift to human civilization, the Cyrillic alphabet builds bridges", noted the head of state and added that it continues to serve dozens of nationalities around the world. He is adamant that the Cyrillic alphabet has its undoubted future in the global world.

Bishop Polycarp extended a greeting on behalf of the Bulgarian Patriarch and Sofia Metropolitan Neofit and stated that they fully support initiatives of such a rank.

"Today we are increasingly witnessing a tendentious abandonment of the Cyrillic alphabet and the use of the Latin alphabet," said Bishop Polycarp. He emphasized that today we need guardians of the work of the holy brothers Cyril and Methodius, as well as their students, and also to remember that we are heirs of worthy ancestors.