Rumen Radev to Mathias Cormann: For Bulgaria, Membership in the OECD is a Strategic Priority 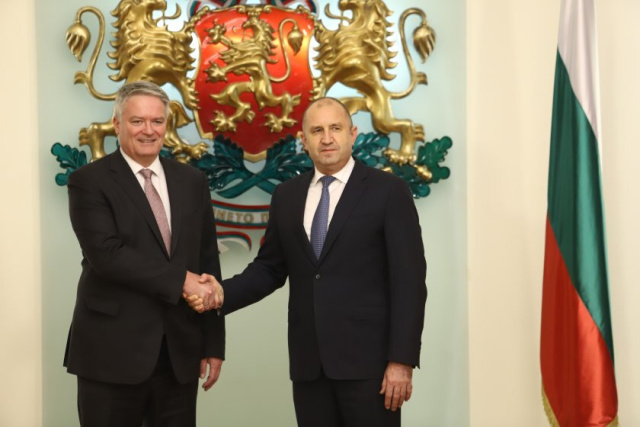 President Rumen Radev spoke with Mathias Cormann: - Secretary General of the OECD in the presidency on "Dondukov" 2 street, after which they gave statements to the media.

"For Bulgaria, membership in the OECD is a strategic priority in which there is consensus and full continuity between the institutions. Bulgaria actively cooperates with the organization, participates in various initiatives, and this is clear evidence that we share the values ​​and principles around which the community of states is built of the organization. Not only that - we have the ambition and readiness, we contribute to finding solutions on important topics on the global agenda," said Rumen Radev, President of the Republic of Bulgaria.

"The OECD has a long, positive and constructive relationship and relationship with Bulgaria, which has been working for several years to align itself with the organization's standards and continues to increase its participation in OECD bodies, which we highly appreciate. We are currently in the process of moving and transitioning at the next level, hoping that Bulgaria will join as a full member of the organization," said Mathias Cormann - OECD Secretary-General.

The meeting of foreign ministers begins with an official dinner given by the acting chairman of the organization and Minister of Foreign Affairs of Bulgaria Nikolay Milkov at the National History Museum.

Tomorrow, in the Boyana residence, the foreign ministers will open the meeting with a discussion on the topic "The CEI region - united in its support for Ukraine and in its efforts to deal with the consequences of the war". The purpose of the discussion is to discuss the broad implications of Russia's military invasion of Ukraine on the region and opportunities to strengthen regional cooperation in support of Ukraine.

The meeting is expected to end with the adoption of a joint declaration by the ministers of foreign affairs. There will also be a symbolic handing over of the chairmanship by Minister Nikolay Milkov to the next rotating chairman of the Initiative - the Republic of Moldova.

A side event of the ministerial meeting is the Economic Forum, where good practices and opportunities for closer connectivity and enhanced regional cooperation will be exchanged.