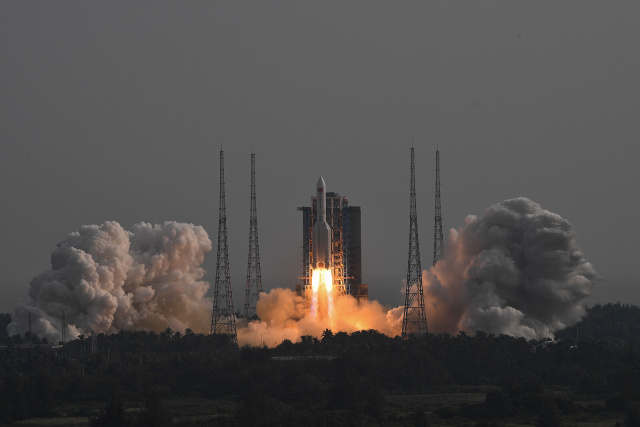 A 23-tonne debris from a Chinese rocket has fallen back to Earth into the Pacific Ocean, according to a tweet from the United States Space Command.

"#USSPACECOM can confirm the People's Republic of China Long March 5B #CZ5B rocket re-entered the atmosphere over the south-central Pacific Ocean at 4:01 am MDT/10:01 UTC on 11/4. For details on the uncontrolled re-entry's impact location, we once again refer you to the #PRC," US Space Command tweeted. Soon after confirming, the 11th Combatant Command in the Department of Defense of the US posted another tweet where it confirmed that there was second atmospheric re-entry correlated with the Chinese Long March 5B rocket as it "exited the #USSPACECOM Area of Responsibility over the Northeast Pacific Ocean region at 4:06 am MDT/10:06 UTC on Nov. 4."

According to The New York Times, this is China's latest round of celestial roulette involving a deliberate uncontrolled atmospheric re-entry.

The rocket stage, by design, did not include a system to guide it into a specific spot on Earth, far away from people. This is the fourth time when a Chinese rocket hit back on Earth. Earlier, in 2020, 2021 and in 2022, three times China's rocket trembled back into the earth.

Earlier this year, China launched a Long March 5B rocket, one of the most powerful rockets in operation today, on Monday to transport a third and final module of its Tiangong space station, the centerpiece of a space program that is second only to NASA's in technological sophistication, reported The New York Times.

Each time, China has successfully gambled that the rocket's parts would not cause injury to people on the ground. But while there were no immediate reports of damage, Friday's re-entry did cause disruption, including a closure of Spanish airspace that delayed hundreds of flights in the morning. A rocket of the same design is expected to be used again at least once more, in 2023.

Other space agencies and experts have been critical of the four rocket launches. Bill Nelson, the administrator of NASA, issued a statement criticizing the Chinese for not taking more precautions, as he had for similar launches in April 2021 and July this year.

"It is critical that all spacefaring nations are responsible and transparent in their space activities," The New York Times quoted Nelson saying, "and follow established best practices, especially, for the uncontrolled re-entry of a large rocket body debris -- debris that could very well result in major damage or loss of life."

China launched the 23-ton Long March-5B Y3 carrier rocket, carrying Wentian on July 24 from the Wenchang Spacecraft Launch Site on the coast of the southern island province of Hainan at 2:22 pm (Beijing Time), according to the China Manned Space Agency (CMSA).

Within a few days of launch, US Space Command said that debris from a large Chinese rocket re-entered Earth's atmosphere over the Indian Ocean at 12:45 pm Eastern time.

"USSPACECOM can confirm the People's Republic of China (PRC) Long March 5B (CZ-5B) re-entered over the Indian Ocean at approx 10:45 am MDT on 7/30. We refer you to the PRC for further details on the reentry's technical aspects such as potential debris dispersal+ impact location," the tweet read.

The rocket had since been in an uncontrolled descent toward Earth's atmosphere -- marking the third time that China has been accused of not properly handling space debris from its rocket stage, CNN reported.

Since then space watchers were tracking the stage path of the rocket in Earth's orbit because of the slight possibility that it could come down over a populated area.