Bulgaria: New inspection will look for the Causes of Last Night’s Fire in the Sofia-Varna Train (UPDATED) 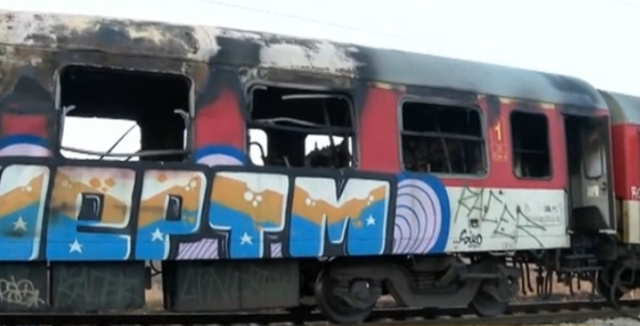 The clarification of the causes of the fire that broke out last night on the train Sofia - Varna, in the area of the village of Mogila and Kaspichan, continues.

No one was injured in the accident, one of the drivers was slightly injured.

A new inspection of the affected wagons will begin this morning:

All 50 people who traveled from Sofia to Varna were evacuated and in good condition.

The only person injured in the accident was the driver of the train, who injured his hand when he tried to detach the locomotive from the first car.

Mains electricity is shut off to prevent re-ignition.

It is expected that a second inspection will be carried out at the scene of the accident, experts from the railway company will also be present in order to assess the causes of the fire.

The railway station in Shumen reported that there was no change in the movement of trains, but in the area of the accident, the trains were moving at a reduced speed. Some of the trains have delays of 4-5 minutes.

First smoke, then crack... finally fire. A firefighter on the train prevented the tragedy

There was a firefighter among the passengers on the train that caught fire last night near Kaspichan, announced the head of the Regional Directorate "Fire Safety and Protection of the Population" in Shumen, Commissioner Ivan Ivanov.

According to him, the fireman was the first to notice the fire, which broke out in the first wagon of the train. The man pulled the handbrake and began to evacuate the people from the train. He probably saved dozens of lives that way.

Experts of the National Railway Infrastructure Company and firefighters will re-inspect the train composition today.

It is still too early to say what the cause of the fire was, said Dimitar Dimitrov from BDZ (Bulgarian Railways), quoted by Radio Shumen.

"A commission of the first category has been appointed, which is yet to investigate the causes of the accident. Until it comes up with conclusions, we will not make assumptions about what caused the ignition. The fact is that the rolling stock in BDZ is operated according to the established technical norms and in this regard, no absolutely no compromises are made. The truth is that the wagons are of an advanced age and this gives its results," he specified.

The head of the RDPBZN in Shumen, Commissioner Ivan Ivanov, said that the firefighters already have a version of the causes of the accident.

"It is most likely a technical error. Some of the passengers said that during movement, smoke appeared, a crack was heard and immediately after that the fire started," he said.