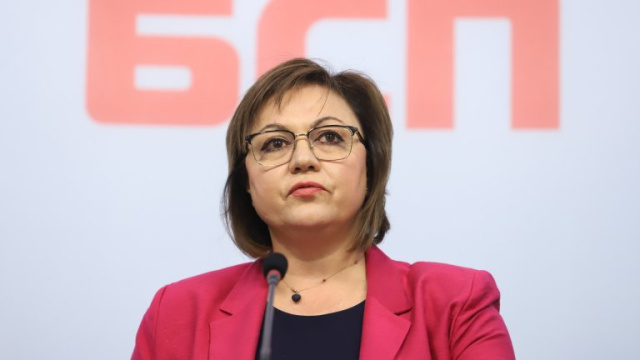 BSP President Kornelia Ninova announced at a briefing in Parliament that at 07:30 a.m. this morning (November 2) two uniformed "Judicial Guards" were looking for her at her home. However, she did not meet them because she had already left for parliament. According to Ninova, the investigation of the prosecutor's office began on the complaint of one of Ninova's most intense opponents, Kiril Dobrev. Dobrev's complaint is that he was not allowed to attend a meeting of the National Council of the Bulgarian Socialist Party, the broad leadership of the party.

The continuation of the case gave Kornelia Ninova the opportunity to complain again about the intervention of the prosecutor's office in party affairs, which, according to her, was illegal. "The prosecutor's office has decided that it can deal with BSP's internal issues, but we want to tell it that it will not happen like that," said Ninova, complaining that the left did not receive meaningful answers from the chief prosecutor Ivan Geshev on major issues such as "the politicians who received money in sacks from the Corporate Commercial Bank, are there indictments and will there be convictions for fraud in the construction of a water pipeline in Pernik, the money spent on repairing dams".

Kornelia Ninova said that she referred the problem to the ambassadors of the European Union countries. The Bulgarian Socialist Party also appealed to the inspectorate of the Supreme Judicial Council, because "all the complaints submitted by Kiril Dobrev fall into the hands of the same prosecutor", and the cases were allegedly distributed randomly. Ninova declined to name the prosecutor.

However, from a publication by the Minister of Justice, Krum Zarkov, it is understood that Ninova's connection of the visit by the "Judicial Guard" to Kiril Dobrev's complaints is inaccurate. "Employees of the General Directorate of Security visited the address to provide Kornelia Ninova with an act of the Sofia District Court on her private complaint against the journalist Yavor Dachkov," wrote Krum Zarkov on Facebook.