Day 252 of the Invasion of Ukraine: UN confirmed a New Grain Convoy in the Black Sea despite the Russian Withdrawal 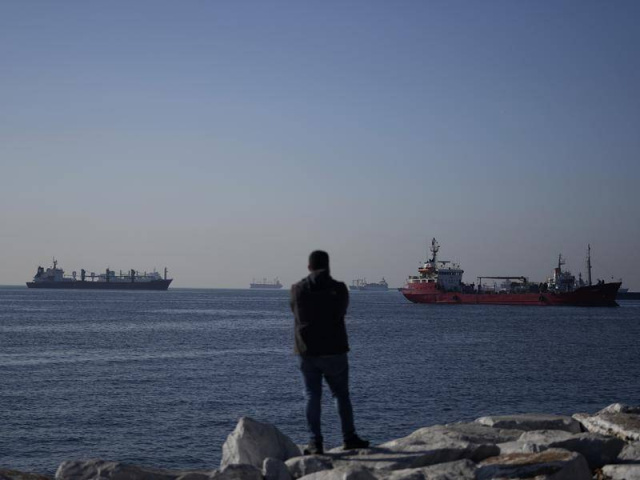 "The grain initiative continues. On Thursday, November 3, 8 ships with agricultural products are expected to pass through the grain corridor. We have received confirmation from the UN. Inspections will also be carried out in the Bosphorus tomorrow." This was written on Wednesday by the Minister of Infrastructure of Ukraine, Oleksandr Kubrakov, after it was announced that convoys will not go to and from Ukraine for today.

On November 1, the coordination headquarters in Istanbul announced that Ukraine, Turkey and the UN have decided to temporarily stop the work of the grain corridor within the framework of the Black Sea Grain Initiative. Shortly after the center's announcement, however, Turkey's Defense Minister Hulusi Akar issued a statement stressing that Ankara would continue to implement the Black Sea Grain Initiative in the same way it had until Russia's announcement that it was suspending its participation in it.

"Ships that have already left Ukrainian ports and are sailing at sea continue their journey. There are no problems with ships sailing under the Turkish flag. They will continue to come out. Evaluating the available data, we believe the agreement will continue," Akar said. Hulusi Akar also talked about the grain corridor with his Russian colleague Sergey Shoigu. "Mr Shoigu is still discussing these matters with his superiors and has the information we have provided. We expect an answer from them today and tomorrow (Tuesday and Wednesday). At the moment, we estimate that this agreement will continue," said the Minister of Defense of Turkey.

Late on Tuesday, UN Grains Initiative Coordinator Amir Abdullah said on Twitter that he hoped the movement of food cargoes from Ukrainian ports would resume as early as Thursday.

Kremlin survey: 68% of Russians want the war to continue

68 percent of Russians think the war with Ukraine should continue. This is shown by the data of a closed public opinion survey commissioned by the Kremlin, the Russian version of "Free Europe" reported.

22 percent of those polled answered that the war should be stopped.

According to 68 percent of Russians, the conflict should have been started. 16 percent are of the opposite opinion.

The majority of supporters of military action with Ukraine are over 45 years of age.

Sociologists note that when evaluating public opinion polls, it is necessary to take into account the conditions of censorship introduced in Russia after the outbreak of war, as well as the supposed fear among respondents of repression.

The fact that most Russians support the war was reported in the summer by sociologists from VCIOM and FOM. Polling stations usually do not mention how many Russians refused to answer questions. According to a FOM official, since the beginning of the war their share has increased by 25%: on average, 15 out of 18 people refuse to answer in order not to be persecuted by the Russian authorities.

US launches demining training project in Ukraine worth USD 47.6 million

US has launched a demining training project in Ukraine by awarding USD 47.6 million to Tetra Tech, Inc. of California, amid the Russia- Ukraine war, the State Department said on Tuesday (local time).

"On September 30, the Department awarded $47.6 million to Tetra Tech, Inc. of Pasadena, California to provide urgent humanitarian demining assistance to Ukraine in the face of Russia's brutal war of aggression," as per the statement released by the US Department of State. According to the statement, Tetra Tech will strengthen the Government of Ukraine's capacity to locate and remove landmines, unexploded and abandoned ordnance, improvised explosive devices, and other explosive hazards from civilian areas.

Tetra Tech will train the Government of Ukraine's demining and EOD teams to international standards and provide them with the tools necessary to do their jobs. The project also supports deploying additional clearance teams and explosive ordnance risk education teams through the local non-governmental organization Ukrainian Deminers Association.

The statement further added that Russia's unlawful war against Ukraine has littered massive swaths of the country with landmines, unexploded ordnance, and improvised explosive devices.

"The explosive hazards block access to farmland, impede reconstruction efforts, prevent displaced people from returning to their homes, and continue to kill and maim innocent Ukrainian civilians. The Government of Ukraine estimates that 160,000 square kilometers of its land may be contaminated - this is roughly the size of Virginia, Maryland, and Connecticut combined," the statement reads

Since 1993, the United States has invested over USD 4.7 billion for the safe clearance of landmines and explosive weapons of war as well as the securing and safe disposal of excess small arms and light weapons and munitions in more than 100 countries and territories.

According to the statement, the United States is the world's largest financial supporter of conventional weapons destruction.

In September, the State Department said that America would provide USD 600 million in additional military assistance for Ukraine.

US State Secretary Antony Blinken said, "I am authorizing our twenty-first drawdown of U.S. arms and equipment for Ukraine since September 2021. This USD 600 million drawdown includes additional arms, munitions, and equipment from U.S. Department of Defense inventories."

"This drawdown will bring the total U.S. military assistance for Ukraine to approximately USD 15.8 billion since the beginning of this Administration."

He noted that together with Allies and partners, the US is delivering the arms and equipment that Ukraine's forces are utilizing so effectively as they continue their successful counter-offensive against Russia's invasion.

Several countries including the UK, the US, Canada, and the European Union have condemned Russia's military operations in Ukraine and imposed sanctions on Moscow. These countries have also promised to help Ukraine with military aid to fight Russia.

The streets and boulevards of the Russian-controlled port of Kherson in southern Ukraine are virtually empty. Many shops and businesses are closed, and at the quay on the banks of the Dnieper River, a handful of people board a ferry to leave, Reuters reports.

As Ukrainian forces advance north and east of the strategic city, Russian-appointed officials there have evacuated tens of thousands of civilians in recent weeks. There are few people left, and some are disappointed that they don't know what's coming.

The uncertainty has been compounded by claims and counterclaims from both sides in the eight-month conflict, which Russia calls a "special military operation," that a nearby dam could be destroyed, potentially triggering flooding downstream.

Vladimir, a pensioner who declined to give his last name, said that during the evacuation from Kherson, Russian-appointed officials pointed to the risk of a Ukrainian counteroffensive or flooding.

"This is the worst thing for us”, he adds. “Not knowing what the future holds."

Nearby, men fish calmly on the shore. The rumble of what looked like artillery fire could be heard in the distance, a witness said.

Ekaterina, a shopkeeper, notes that business has slowed sharply after so many people have left. She adds that she is determined to stay.

Russian President Vladimir Putin annexed Kherson region after holding referendums in four Ukrainian regions in late September that were dismissed as fake and illegal by Kyiv and the West.

Ukrainian armed forces closed in on the city after retaking some territory lost earlier in the conflict and said Russia was building up in the region to defend against a possible attack on Kherson.

Vladimir Saldo, the Russian-backed head of Kherson Oblast, which is partially occupied by Russian forces, asked citizens on the east bank of the Dnieper to start leaving their homes and announced an expansion of the evacuation zone along the river.

The new zone will cover an additional 15-kilometer section around the Dnieper, which divides Kherson Oblast, to include seven more settlements, Saldo said.

He repeated claims rejected by Kyiv that Ukraine may be preparing to attack the Kakhovka dam and flood the area.

Ukraine says repeated Russian claims that Kyiv is preparing to strike the dam that regulates water supplies to the Russian-annexed Crimean peninsula and the Russian-controlled Zaporizhzhia nuclear power plant are a sign that Russia itself is considering mounting an attack and blaming Kyiv and his western supporters.

Authorities in the Ukrainian capital Kyiv are preparing more than 1,000 points where residents will be able to stay warm in case the city's heating system is knocked out by the ongoing Russian attacks, the city's mayor Vitali Klitschko said, according to Reuters.

Klitschko today wrote in the Telegram application that the city authorities are considering different scenarios because of the rocket attacks. "The worst is if there is no electricity, water or heat at all," he said. "For this case, we are preparing over 1,000 points for providing heating in our city," Klitschko added. The points will be equipped with generators and will have stocks of essential products such as water, he specified.

The Ukrainian government has urged Ukrainians who have already left the country to stay abroad during the winter. It accused Russia of provoking a new humanitarian crisis by forcing even more people to flee, terrified by the prospect of having to survive without electricity or heat during the cold season.

Former British Prime Minister Boris Johnson said he did not believe Russian President Vladimir Putin would use tactical nuclear weapons in the conflict with Ukraine because it would be "crazy to cause a total disaster in his own country," the AP and DPA reported.

According to Johnson, if Putin uses nuclear weapons, it will mean "Russia immediately resigns from the club of civilized nations" and will plunge the country into "a kind of cryogenic economic freeze", because in this case the West will increase the economic punishment on Russia.

Johnson added that it would also cause an "absolutely hysterical reaction" in Russia itself. According to the former prime minister, in addition, if Putin decides to use tactical nuclear weapons, he will also lose the support of China.

Johnson made these statements to Sky News.

A high-ranking American diplomat is in Kyiv

A senior US diplomat is in Ukraine to express continued US support for that country in its war against Russia. The visit of Karen Donfried, US assistant secretary of state for Europe and Eurasia, comes a few days before the US Congressional elections, which may have an impact on the aid provided by Washington to Kyiv, reported AFP.

If Republicans win the Nov. 8 congressional elections, Republican Kevin McCarthy will become Speaker of the House of Representatives. He has already unnerved Kyiv and US allies by saying his party "will not sign a blank check" to Ukraine.

A number of senior US officials have visited Ukraine so far. In April, Secretary of State Antony Blinken came along with Defense Secretary Lloyd Austin. Then Blinken returned there in September.

Ukraine will be at the center of G7 foreign ministers' talks in Munster, Germany on Thursday and Friday.