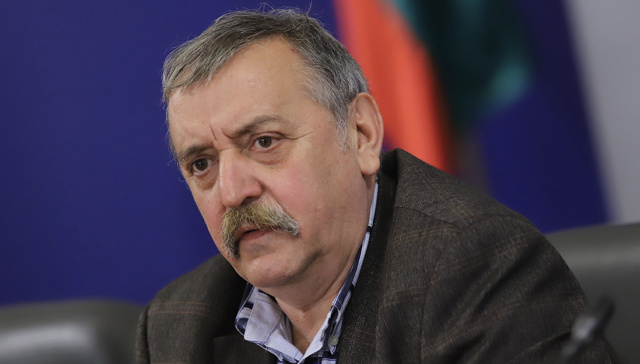 "By the end of November, cases of respiratory infections will increase, as we currently have cases of metapneumoviruses, rhinoviruses, adenoviruses, and by the end of November we expect the first cases of respiratory syncytial virus, which is dangerous for newborns and the very elderly. It causes severe pneumonia and complications," Prof. Todor Kantardzhiev, former director of the National Center for Infectious Parasitic Diseases, told BNR.

Prof. Kantardzhiev added that in the month of October, due to the warm weather, the cases of Covid-19 decreased.

"By the end of November we should also expect the first cases, already in Europe, of seasonal flu. This year's seasonal flu, according to the Stockholm Center for Disease Control, is believed to be H3N2, in that the first cases that we have them in Scandinavia and Western Europe are on this sub-variant of the flu. This sub-variant is in the flu vaccine and we don't expect anything surprising.

We expect the flu epidemic to develop more slowly than before Covid, we also expect an increase in covid cases. The virus, which underwent many mutations, became quite non-lethal. When an epidemic microorganism is weakly lethal, it is genetically very different.

This makes the surprises with the appearance of some of his mutations, and this is done by the fact, not that the vaccines do not work, but they work much weaker than the strong viruses. The strong, dangerous microorganisms have vaccines for them, which are put in place, you are protected - this is the case with tetanus, diphtheria, polio...

Whereas, when the microorganism is genetically heterogeneous, not so dangerous, vaccines protect against severe illness," explained Prof. Kantardzhiev.

"According to sequencing at the National Center for Infectious and Parasitic Diseases a few days ago, there is a proven variant of Omicron - a BQ 1.1 variant, which is a sub-variant and a new variant as well. The Center for Disease Control in Atlanta and the European Center in Stockholm say that in November he will begin to displace the other options. This will happen much more slowly in Bulgaria than in Europe and the USA. It has already been proven in a 76-year-old woman in our country.

It is important to know about it that, although it is different from BA5 and BA4, it still remains the fact that if a person is vaccinated with the new vaccines, that is, there are two booster vaccines against Omicron, the likelihood of a severe course of the disease is minimal. Vaccination can be done together with the flu vaccine, it can even be done on the same day," said Prof. Todor Kantardzhiev.

According to the microbiologist, the best remedy at the onset of a viral infection is to start with antioxidants, also a diet, considering lemon with soda, which destroys the virus in the nasopharynx and thus does not give it a chance to replicate. The tomato is also very useful, as well as a return to the good Bulgarian traditions in eating.

Regarding the dangerous respiratory syncytial virus, which starts shortly before the flu wave, there is a successful program in Bulgaria, according to which all premature babies are necessarily vaccinated with monoclonal antibodies, which protect them against this virus for one year. This protects underweight babies and young children. Their elderly relatives should not come into contact with the newborn at least until the 40th day, in order not to infect them, and also not to infect the baby with the "whooping cough" bacteria. The symptoms of this virus are severe pneumonia and it is dangerous, stressed Prof. Kantardzhiev.

He again recommended starting at least 10 days of vitamin D now, in view of the coming winter viral illnesses, to protect the mucosa. Also, the intake of artificial vitamins should not be throughout the winter, but for about 20 days. However, the intake of foods, especially fruits and vegetables, which are antioxidants is recommended, and they do not accumulate and do not burden the body.

Prof. Kantardzhiev recalled that antibiotic treatment is included when bacterial complications, such as pneumonia, are already present. At 10 - 15 percent, they are found in viral infections.

“For the seasonal flu, we have a sufficient number of antiviral drugs that are prescribed by a doctor. They should be taken at the first symptoms in the first two to three hours. When the reception is started immediately, in three days you will be completely healthy”, said Prof. Kantardzhiev.

According to him, the peak of the flu will come in the third quarter of January or in the first ten days of February. Before these periods, it is good to have the so-called "flu vacations" and this gives a positive effect on the spread of respiratory infections, which is a proven practice in our country, being introduced in individual areas.

Prof. Kantardzhiev said that the probability of getting sick with both influenza and Covid at the same time is very small, but if this happens, both are treated at the same time, and in the first stage, the nasopharynx is treated and the antioxidants are increased.