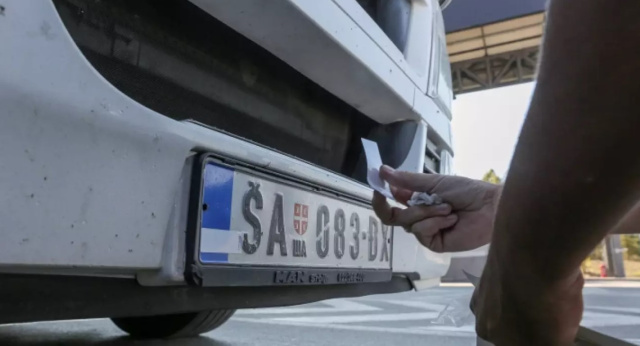 The Serbian armed forces are now on high alert due to the situation in Kosovo on the orders of President Aleksandar Vucic.

This was stated by the newly appointed Minister of Defense Milos Vucevic in an interview with Happy TV on the day when the deadline for changing the registration numbers of the Kosovo Serbs' cars should have expired.

The plates should have been replaced with ones indicating the country they live in, such as the Republic of Kosovo (RKS), rather than those with initials such as KM (Kosovska Mitrovica).

The latter have been used by Serbs in Kosovo since the end of the war in 1999, before Kosovo declared independence nine years later. Serbia continues to consider Kosovo as its province.

According to Vucevic, Serbia is a serious country and "war games" should not be conducted, and Belgrade wants dialogue; it's just that the army is ready to act on any orders of Vucic as commander-in-chief, in defense of the interests of the Serbs in Kosovo "and no one should doubt that".

“We are not preparing for war, but we cannot be completely unprepared for anything that happens,” said the Minister of Defense of Serbia

On November 1st (this morning), the deadline for Serbs in Kosovo to change their numbers was supposed to expire. Its previous approach - at the end of July - raised tensions between Belgrade and Pristina with a new border blockade. Following intervention by the European Union and the United States, implementation was delayed by three months.

Kosovo Prime Minister Albin Kurti insisted that his country would not waive the new deadline, but the US and the EU made such a request. Kurti has argued since late last week that he was only extending the timeframe for implementing the new rules to March or April. According to him, it simply gives more time to transition to the new plates.

The West remains dissatisfied despite the compromise

The plan was to start sending notifications on November 1 about the need to change the "illegal" plates. From November 21, there will be a two-month period in which fines of 150 euros will be issued, after which the plates will be valid for another two months of transitional period, but at the end of it (on April 21) vehicles with "Serbian" plates will be confiscated.

The EU's argument was that according to the 2011 Brussels agreement between Serbia and Kosovo, Pristina was within its rights to request the replacement of the old plate numbers (this was also stated by the State Department), but a requirement of another agreement from 2016 was not met - the procedure to last 12 months.

The Kosovo government started implementing the number plan hours ago and sending out the notifications in question. Anyone with cars registered as KM, for example, is expected to receive the already sent reminders to report to the re-registration center to get the new plates.

"You never know with Kurti," said Vucevic to "Happy TV". "In the morning they issued the first reminders to Serbs about the plates. I can't believe that the Quint (the Five - an informal Kosovo talks group of the US, France, Germany, Italy and Great Britain ) has no influence over Kurti and his administration."

However, not only Serbia is disappointed by this version of the plan, but also partners such as the USA. The special envoy for the Western Balkans, Gabriel Escobar, explained that Kosovo should have postponed by another 10 months, not by the already stated deadline.