Bulgaria: Anti-Authoritarian Books on the Steps of the Soviet Monument in Sofia for 250 Days since Russia’s Invasion of Ukraine 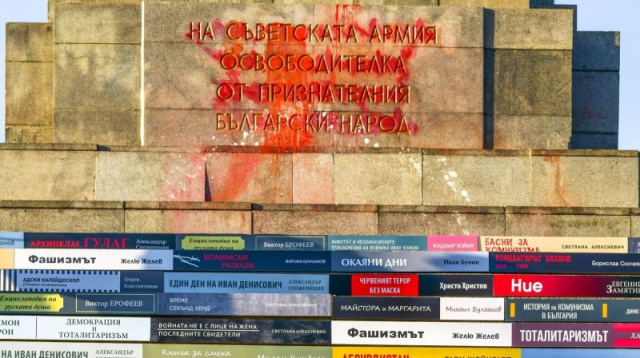 Monument of the Soviet Army in Sofia, Bulgaria

The artistic installation "Reading for Freedom" decorates the stairs in front of the Monument to the Soviet Army in Sofia.

The municipality of Sofia ordered a pile of books dedicated to the dystopian reality of socialism.

The book titles included are "1984" by George Orwell, "The Hunger Angel" by Herta Müller, "The Truth that Killed" by Georgi Markov, "Putin's Russia" by Anna Politkovskaya, " The Book of Laughter and Forgetting " by Milan Kundera, "The Gulag Archipelago" by Alexander Solzhenitsyn, " Reisen in die Ukraine und nach Russland " by Joseph Roth, "The Master and Margarita" by Mikhail Bulgakov, "Secondhand Time " by Svetlana Aleksievich and others. The event marks the 250th day since the beginning of the so-called (by the Russians) "special military operation" in Ukraine.