Over 60 Die in Morbi cable Bridge Collapse in India 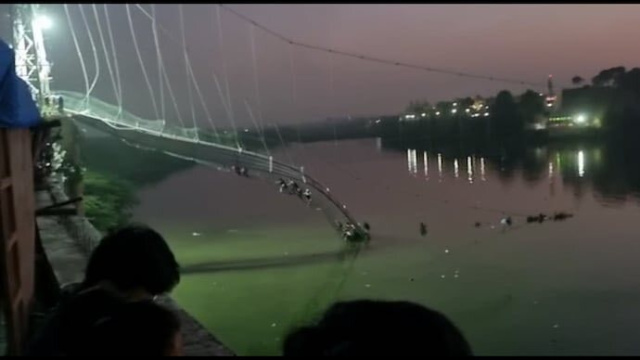 Over 60 persons have lost their lives in the Morbi cable bridge collapse incident that took place in Gujarat on Sunday evening, state Panchayat Minister Brijesh Merja, who is present at the incident spot, said.

"More than 60 people have died. 17 people are admitted to the hospital at the moment. The Chief Minister is coming. The incident took place at around 6.40 pm," Minister Merja told Indian media ANI. It was earlier reported that 35 persons had lost their lives in the unfortunate incident, the death toll has risen to over 60 so far.

BJP MP from Rajkot, Mohanbhai Kalyanji Kundariya said that the NDRF is conducting the rescue operation.

"More than 60 bodies were recovered, of which more are of children, women & elderly. Rest have been rescued; NDRF rescue op is underway. We're taking this matter very seriously, it's very saddening," he said.

"Machinery present at the spot to pump out the water so that we can figure out the bodies underneath, as there's a lot of silt. I believe the bridge got overloaded and that led to the incident. Many teams engaged in rescue, CM to arrive shortly, " he added.

The eyewitnesses Amit Patel & Sukram present on the spot said that the incident might have taken place because of the huge crowd at the bridge.

"Many people came here in view of the Diwali holidays and weekend; it's a tourist-friendly place. The incident occurred probably because of the huge crowd at the bridge. When it collapsed, people fell over each other," they said.

Soon after the incident, State Home Minister Harsh Sanghavi informed that the National Disaster Response Force (NDRF) has been instructed to reach the spot.

"It's a sad and unfortunate incident. Around 6:30 pm, the bridge in Morbi carrying 150 people collapsed. In just 15 mins, fire brigade, collector, district SP, doctors, and ambulance reached the spot... I'll be reaching the spot too. The official death toll in the matter is seven," Sanghavi said while speaking to the reporters there.

The Minister informed that most of the people have been rescued.

"We have been able to rescue most of the people there... we are receiving all kinds of help from the Centre. NDRF and other agencies have been instructed to reach the spot. Most people injured due to the collapse have been admitted to the hospital," he said.

Meanwhile, NDRF DG Atul Karwal said that three teams have already been dispatched to assist in the rescue operations.

"Three NDRF teams have already been dispatched--two from Gandhinagar & one from Baroda--to assist in the rescue operation following an accident in Gujarat's Morbi city in which several people fell into Machchhu river after a suspension bridge collapsed," Karwal said.

Chief Minister Bhupendra Patel said that he is cancelling all his events today and leaving for Morbi where the incident took place.

"I am leaving for Morbi by cancelling all my upcoming events today. Direct monitoring of the situation and necessary coordination will be achieved by reaching the site in person," he tweeted.

Earlier, the Prime Minister's Office said that PM Modi has asked for close monitoring of the situation and delivery of all possible help to the affected persons.

"PM @narendramodi spoke to Gujarat CM @Bhupendrapbjp and other officials regarding the mishap in Morbi. He has sought urgent mobilisation of teams for rescue ops. He has asked that the situation be closely and continuously monitored, and extend all possible help to those affected," the PMO tweeted.

Chief Minister Bhupender Patel said instructions have been given to the officials to arrange immediate treatment for the injured.

"I am deeply saddened by the tragedy of suspension bridge collapse in Morbi. Relief and rescue operations are ongoing by the system. The system has been instructed to arrange immediate treatment for the injured. I am in constant contact with the district administration in this regard," the Chief Minister said.