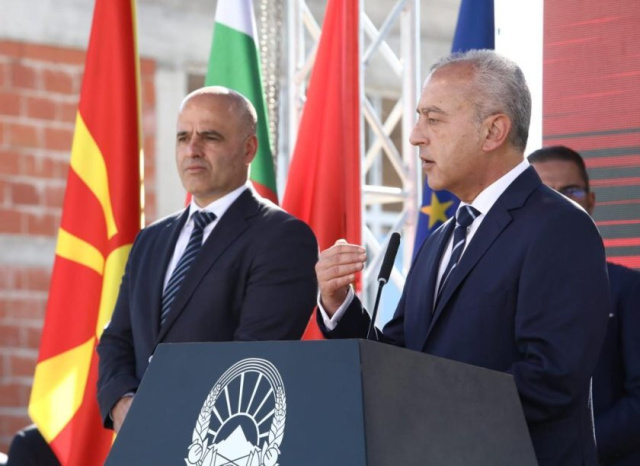 The Prime Ministers of Bulgaria and the Republic of North Macedonia, Galab Donev and Dimitar Kovachevski, launched the construction of the railway line from Kumanovo to Beljakovce in our southwestern neighbor. The line should reach the border with Bulgaria and is part of the trans-European corridor number 8 - a project more than two decades old. Kovachevski and Donev did not miss the hot topic of the opening of the Macedonian cultural club "Nikola Vaptsarov" in Blagoevgrad today.

Corridor 8 aims to connect Italy, Albania, RNM and Bulgaria, from Brindisi-via Durres-Tirana-Skopje-Sofia-Plovdiv-Burgas and Varna and is of strategic importance for the EU and NATO.

The infrastructure located in corridor number 8 has been the desire of a number of generations over the past 140 years, noted Prime Minister Galab Donev. His colleague, Dimitar Kovachevski, that with the railway the two countries are building their common future, which is: regional connectivity, good neighborliness, economic development, fast travel for people on both sides of the border.

Regarding the "Nikola Vaptsarov" club, which will be opened today in Blagoevgrad, Prime Minister Kovachevski indicated that he cannot stop anyone who wants to go from doing so, but that Skopje will send an official request for an official club in the city, and the Prime Minister Donev - that the organization behind the club has a pronounced anti-European profile and that Bulgaria will monitor for illegal ideas in its activities.

Over the years, many groundbreakings have been made on this railway line, reaffirmed as a priority in memoranda between the two governments most recently in 2014, 2017, 2019 and now. The project for corridor eight also includes the construction of the highway to the border with Bulgaria.

Over 30 kilometers of railway line for several tens of millions of euros should connect Kumanovo and Belyakovce. And from there the line should continue to the Bulgarian border. In front of his Bulgarian colleague Galab Donev and European ambassadors, Dimitar Kovachevski announced that the relationship between our two countries will become a reality.

Acting Prime Minister Galab Donev indicated that Bulgaria is working as a priority to include corridor number 8 in the European transport network.

"The consequences of the war in Ukraine once again reveal one of the most vulnerable places of our region - namely the underdeveloped, and even missing, missing infrastructure. In the conditions of a potential energy and food crisis, it is vitally necessary to ensure direct supply routes”, declared Galab Donev.

Instead, our countries are looking for supplies through third countries, which increases the price, Donev pointed out.

The European Union is financing the construction of the railway line to Bulgaria with over half a billion euros - the largest European investment in North Macedonia so far, explained the ambassador of the Union in David Geer.

"We look forward to the day when we can travel by train from the Adriatic to the Black Sea through the territory of two EU candidate countries and one Member State, and to the day when we can travel without we are leaving the EU - after the admission of North Macedonia and Albania," said David Geer, EU Ambassador to the Republic of North Macedonia.

Regarding the "Nikola Vaptsarov" club, which will be opened today in Blagoevgrad, Prime Minister Kovachevski pointed out that it is financed by private individuals and that he cannot stop anyone who wants to go. He called for rapprochement between the two sides and not to use rhetoric in the opposite direction.

Galab Donev pointed out that the state will carefully monitor for illegal ideas in the activities of the "Nikola Vaptsarov" club.

"This club, which will be opened in Blagoevgrad, is unconstitutional and not registered under the laws of Bulgaria, especially since the financing of this club, as Prime Minister Kovachevski shared, is from an organization in Canada that has rather dubious anti-European, anti-American, anti-Semitic messages and works in this direction. Of course, we will make sure that this club does not preach or advocate ideas that contradict the laws in Bulgaria," stated Gulab Donev.

Answering the Skopje media whether the entry of the Bulgarians into the constitution will stop the Bulgarian blockades, Donev reminded:

"Bulgaria is part of the EU and Bulgaria has set its conditions, but these conditions, which have already been reaffirmed by the EU member states, are sealed with 27 signatures. What is in the contract and what is yet to be fulfilled, for to hold the first intergovernmental conference, this is something that the RNM should strive for. The road is difficult, but all candidate countries for membership have passed it," Donev reminded.

Within the framework of the French proposal, Bulgaria published a declaration indicating that all the documents in which it is mentioned should not be interpreted as recognition by Bulgaria of the "Macedonian language".