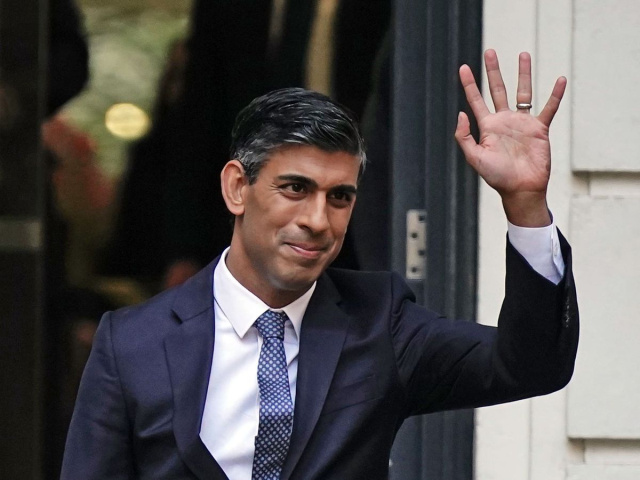 New UK Prime Minister Rishi Sunak in his first speech at 10 Downing Street on Tuesday vowed to earn the trust of Britons amid economic and political turmoil.

"Trust is earned, and I will earn yours," he told the public from outside No 10 Downing Street. Sunak said that his government will have integrity, professionalism and accountability at every level.

"I stand here before you ready to lead our country into the future, to put your needs above politics, to reach out and build a government that represents the very best traditions of my party. Together we can achieve incredible things," said Sunak.

"We will create a future worthy of the sacrifices so many have made and fill tomorrow and every day thereafter with hope," he added.

Sunak went on to say he has been chosen as leader of the Conservative Party and Prime Minister to fix some of the mistakes made by his predecessor.

"That work begins immediately," he said, adding, "My government will build an economy that makes the most of the Brexit opportunities."

He also lauded former UK PM Liz Truss, paying tribute to her, he said, "I want to pay tribute to my predecessor Liz Truss. She wasn't wrong to want to improve growth in this country. It is a noble aim and I admired her restlessness to create change but some mistakes were made, not born of bad intentions but mistakes nonetheless."

He also paid tribute to former PM Boris Johnson. The new UK PM said that he will always be grateful to Johnson for his "incredible achievements" as Prime Minister. He will treasure Johnson's warmth and generosity of spirit.

Responding to Sunak's tribute, Johnson tweeted, "Congratulations to @RishiSunak on this historic day, this is the moment for every Conservative to give our new PM their full and wholehearted support."

Sunak added that he knows the mandate the Conservative Party earned in 2019 is not the sole property of one person, rather "it is a mandate that belongs to and unites all of us".

He pledged "a stronger NHS, better schools, safer streets, control of our borders, protecting our environment, supporting our armed forces and leveling up."

Sunak will be UK's third leader in seven weeks after winning a Tory leadership contest triggered by Truss stepping down.

Sunak ruled out an early general election, despite calls from Labour, the Scottish National Party, the Liberal Democrats and the Green Party.