Von der Leyen: The World should Not Waste Time and Start Rebuilding Ukraine 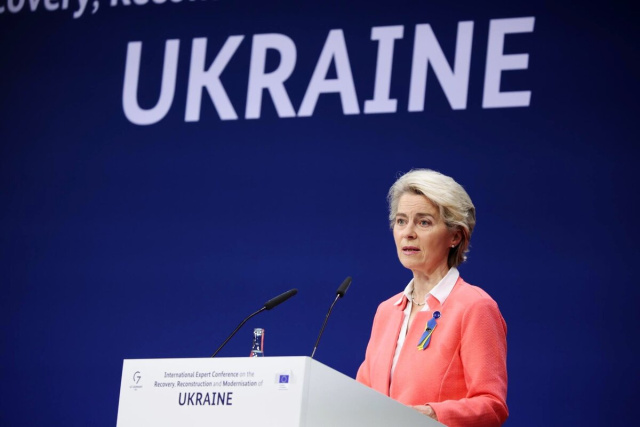 Speaking at the International Expert Conference on the Reconstruction of Ukraine in Berlin, von der Leyen called for the creation of an international coordination platform, preferably before the end of the year or early 2023, adding that the EU executive commission is ready to provide the secretariat for it.

She confirmed that the Commission is ready to provide full support to the platform, saying that the main financial assistance amounts to 3 to 5 billion euros per month just to cover recurring day-to-day costs.

The head of the EC stressed that the World Bank estimates the damage caused by the Russian attacks at 350 billion euros, while the EU, its member states and financial institutions have provided Ukraine with more than 19 billion euros in aid so far, not including military aid.

"We have no time to lose, the scale of the destruction is staggering. The World Bank puts the cost of the damage at 350 billion euros (about $345 billion)," she said at the Berlin conference on rebuilding Ukraine.

Addressing the conference via video link, Ukrainian President Zelensky said Russian missiles and Iranian drones had destroyed more than a third of the country's energy infrastructure, making it vulnerable in the short term and delaying European integration.

"Russia is destroying everything to make it harder for us to survive this winter. So that you cannot integrate the Ukrainian economic potential for as long as possible," Tok pointed out.

The conference, organized by German Chancellor Scholz and European Commission President Ursula von der Leyen, aims to decide how to proceed with the reconstruction of Ukraine after the war, which is in its ninth month.

Ukraine says it will cost $750 billion to repair the damage caused by a war that has cost thousands of lives and destroyed homes, hospitals, schools and factories.

Zelensky said it was in Europe's interest to help Ukraine recover from a war condemned by Western nations as an imperialist land grab by Russian President Vladimir Putin but styled by Moscow as a "special military operation" to purge its neighbor of extremists.

"You all surely know what we have to offer," he said. “It is Ukraine that can ensure that Russian revanchism does not break up our European home.”

In a sign of concern widely shared but rarely voiced in European capitals that Ukraine's recovery aid could be stolen or wasted, Zelensky stressed that three-quarters of the advisory board of his country's recovery fund would be from donor countries.