Day 243 of the Invasion of Ukraine: Zelensky rejected Russia's claims of using a "Dirty Bomb" 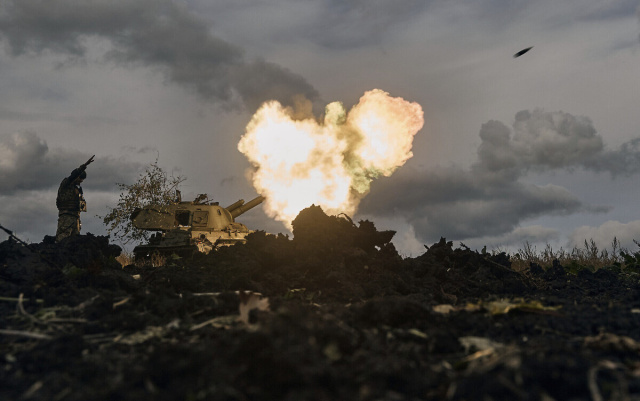 The pro-Russian administration in Kherson formed a local militia

The Russian-appointed administration of Ukraine's Kherson region has announced the formation of a local militia, saying any men left in the city can join, Reuters reported.

Russia continues to use Iranian drones against targets on the territory of Ukraine, the British Ministry of Defense announced. Moscow is likely using the Iranian drones to penetrate Ukrainian air defenses and as a replacement for Russian-made long-range precision weapons that are becoming increasingly scarce, the intelligence update also said.

Ukraine's efforts to intercept the drones have been successful, the British ministry says.

In the Kursk region, the construction of two reinforced defense lines near Ukraine has been completed.

This was announced by the governor of the district, Roman Starovoit. He did not go into details, but Kursk Oblast borders Ukraine. The city of Kursk itself is 130 km from the border with the northeastern Sumy region.

The defense lines in question were built with the help of the Ministry of Defense and the Border Management of the Kursk Region.

According to Starovoit, Kursk will have a third line of defense by November 5. In the southern Belgorod region, which also borders Ukraine (and which is also subject to periodic shelling), there are also concrete block defenses, and such defenses are currently being created in the annexed Luhansk region.

For the Belgorod region, data emerged that the private military company "Wagner" was involved in the construction of the line, which - according to Russian media and according to the claims of the founder of the company – has built similar ones in the Ukrainian Luhansk region, on the territories annexed by Russia, where the Ukrainian counter-offensive continues.

The private military company Wagner, founded by Yevgeny Prigozhin, issued a press release citing its owner for work on a "defensive line" - the so-called "Wagner Line" - in the Donbas, but also with the construction of "defense facilities" and the creation of a "people's militia" in the district.

"Concord" has not yet commented on whether Prigozhin has a similar role in the Kursk region.

Ukraine's President Volodymyr Zelensky has rejected claims that Kyiv is preparing to use a "dirty bomb," as the Russian defense minister suggested during phone calls with some of his NATO counterparts.

"If Russia claims that Ukraine is allegedly preparing something, it means one thing: Russia has already prepared all this," Zelensky said in a video address on social networks.

"I think now the world needs to react as sharply as possible".

If Russia was preparing "another escalating step, it should see now, preventively and before any new ‘dirt’ of its own, that the world will not swallow it," he added.

"Even the very Russian threat of nuclear weapons - and even more so against our country, which has given up its nuclear arsenal ... is a reason for both sanctions and an even greater increase in support for Ukraine," Zelensky said.

Earlier today, Ukraine's Foreign Minister Dmitry Kuleba condemned Moscow's claims as "absurd" and "dangerous". "Russians often blame others for what they themselves plan," he added.

In talks with his British, French and Turkish counterparts, Shoigu expressed "concern about possible provocations by Ukraine with the use of a dirty bomb".

A statement from Britain's Ministry of Defense said Defense Secretary Ben Wallace had "rejected" claims that Western countries were seeking to help Ukraine escalate the conflict.

He also "warned that such allegations should not be used as a pretext for further escalation".

On Sunday, Shoigu also discussed Ukraine with Pentagon chief Lloyd Austin in their second telephone conversation since Friday. He also "warned that such statements should not be used as a pretext for greater escalation."

Anton Kuznetsov-Krasovsky, the director of the distribution of the Russian propaganda channel RT, caused a scandal in the civilized world after he said that Ukrainian children should have been drowned into a river, because of claims that their homeland was occupied by the "Muscovites", as Russians are nicknamed in Ukraine. The video caught the attention of The Daily Beast's Julia Davis and prompted Ukrainian Foreign Minister Dmytro Kuleba to call for RT to be banned worldwide.

Meanwhile on Russia's state-funded RT, director of broadcasting Anton Krasovsky suggests drowning or burning Ukrainian children, makes hideous comments about the rapes by Russian soldiers in Ukraine, says Ukraine should not exist and Ukrainians who resist Russia should be shot. pic.twitter.com/BGIaBNok4v

The scandalous conversation took place between Kuznetsov-Krasovsky and the Russian nationalist writer Sergei Lukyanenko. Shortly before the drowning plot, the director of distribution of the channel, whose director is the Kremlin propagandist Margarita Simonyan, "disproved" the information of the UN about cases of Viagra being given to soldiers to rape Ukrainian women, saying that the Ukrainian women would have given each other the money for a funeral so that the Russians would rape them. And he drops the ball with the words "it seems to me that Ukrainians have always hated Russians", in which Lukyanenko, born in 1968, remembers how in 1980, when, apparently, he was 12, he was for the first time in Ukraine and local children told him that their country was occupied by the Muscovites, and if it weren't for them, the Russians, the country would have developed like France. The fantasist returns to his memories as a 12-year-old and tells that these children were Russian-speaking with Russian surnames, boys, and their fathers were military.

"For this purpose, in ancient Rus there were ‘rods’ (thin, flexible sticks for fighting), they worked better than the river, they educated." - the nationalist-fantasist tries to oppose humanely, but the presenter does not give up:

"And I would... they have s**t, but they call it, little houses, such terrible, monstrous things, they are s**t. Did they destroy the Carpathians, the Carpathians are something disgusting. And every house there is called ‘smerekova hata’ (spruce house). And straight into that ‘spruce hut’ - you stuff them and burn them." An awkward pause follows from Sergey Lukyanenko.

“Governments that have not yet banned RT should see this video. These are the ones you side with if you allow RT to work in your countries. Aggressive incitement to genocide (we will take this to court) that has nothing to do with freedom of speech. Ban RT worldwide!" Dmytro Kuleba urged on the occasion of the scandalous broadcast.

IMF: Europe risks deeper recession due to war and inflation

An economic downturn in parts of Europe could turn into a "deeper recession" across the continent as energy disruptions threaten to wreak economic havoc and a cost-of-living crisis risks inflaming social tensions, the IMF said.

The new government support "only partially" offsets this strain, the fund said.

Russia's invasion of Ukraine this year sent inflation soaring as energy prices soared, forcing the European Central Bank to raise interest rates to cool the economy at the risk of triggering a contraction.

"The outlook for Europe has worsened significantly, with growth set to slow sharply and inflation to remain high," the IMF report said.

The fund has already forecast that Germany and Italy will fall into recession next year, becoming the first advanced economies to shrink in the wake of the war on Europe's eastern flank.

Although Europe was on the way out of the pandemic at the end of last year, the war in Ukraine "completely changed this picture", the IMF said.

Overall, growth in Europe's advanced economies is expected to slow significantly to 0.6 percent in 2023, the report said on Sunday.

For developing economies in the region, excluding Turkey, growth is also expected to slow to 1.7%, while losses in conflict countries will be large.

"The main risk in the near term is further disruption of energy supplies, which, combined with a cold winter, could lead to gas shortages, consumption rationing and deeper economic difficulties," the IMF said.

Inflation may also remain higher for longer, and social tensions may deepen due to rising costs, the fund added.

Under current circumstances, central banks should continue to raise key interest rates, the IMF said, calling for a "faster hike" in advanced economies.

Policymakers must "walk the fine line" between fighting inflation and supporting vulnerable households and businesses amid an energy crisis, the financial institution says.

Earlier this month, the IMF forecast that the German economy - Europe's largest - would contract by 0.3% in 2023, hit hard by its dependence on Russian gas after Moscow cut supplies to Europe in alleged retaliation about Western sanctions because of the conflict.

G7 called on Russia to return the Zaporizhzhia NPP to Ukraine

The G7 countries have called on Russia to return full control of the Zaporizhzhia nuclear power plant to Ukraine. This was reported by Uniform, referring to Reuters.

"We condemn the repeated abductions of the management and personnel of the Zaporizhzhia nuclear power plant. We call on Russia to immediately return full control over the plant to the rightful sovereign owner - Ukraine."

That's what the statement says.

The largest atomic power plant in Europe has been taken over by the Russian military since March 4. There is military equipment and ammunition on its platform, and the military is shelling the adjacent territory and the station itself.

A head of service and an assistant to the general director were later detained and taken to an unknown direction.

The President of Ukraine, Volodymyr Zelensky, said that the world community must act more actively to get rid of Russian nuclear blackmail.