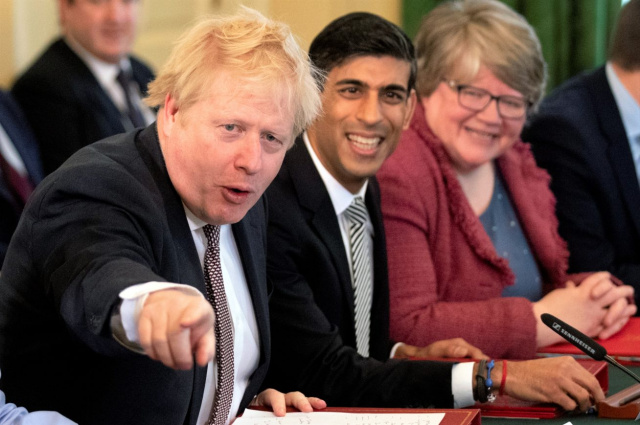 The United Kingdom is all set to have its first Prime Minister of Indian origin, Rishi Sunak, as former PM Boris Johnson dropped out of the race, according to UK media reports.

Boris Johnson ruled himself out of the Conservative party leadership race despite claiming he had the required support. Johnson said he had come to the conclusion "this would simply not be the right thing to do" as "you can't govern effectively unless you have a united party in Parliament," reported Independent.ie. He also added that this was due to the failure to reach a deal with Rishi Sunak and Penny Mordaunt. "I am afraid the best thing is that I do not allow my nomination to go forward and commit my support to whoever succeeds," he said.

Johnson added, "I believe I have much to offer but I am afraid that this is simply not the right time." "I believe I am well placed to deliver a Conservative victory in 2024 - and tonight I can confirm that I have cleared the very high hurdle of 102 nominations, including a proposer and a seconder, and I could put my nomination in tomorrow."

"There is a very good chance that I would be successful in the election with Conservative Party members - and that I could indeed be back in Downing Street on Friday."

"But in the course of the last days I have sadly come to the conclusion that this would simply not be the right thing to do. You can't govern effectively unless you have a united party in parliament," he continued saying, reported Independent.

It is pertinent to note that Johnson's campaign team have earlier told supporters they have secured the 100 nominations needed from MPs for the former prime minister to get on the ballot paper.

Johnson landed in Britain on Saturday from a Caribbean holiday which was seemed as a formal bid for the Conservative Party leadership race. Johnson was forced to step down on July 7 following a series of resignations of cabinet members, who protested against his scandal-plagued leadership.

Earlier, Johnson had expressed his willingness to enter the PM race, saying he is "up for it." Meanwhile, Britain's former Finance Minister Rishi Sunak on Sunday declared his candidature to contest the UK Prime Ministerial race after Liz Truss resigned as PM and left the country in a state of political turmoil.

The former Chancellor of the Exchequer of Indian descent confirmed the decision through his social media and said that he wants to fix Britain's economy which is in a major crisis at present.

In a tweet, Sunak tweeted and said, "The United Kingdom is a great country, but we face a profound economic crisis. That's why I am standing to be Leader of the Conservative Party and your next Prime Minister."

"I want to fix our economy, unite our Party and deliver for our country," Sunak wrote. Sunak's announcement comes after Truss' resignation as Prime Minister on Thursday as the opposition reiterated its demand for a general election.

On Friday, Penny Mordaunt, the Tory leader in the House of Commons too threw her hat in the ring. "I've been encouraged by support from colleagues who want a fresh start, a united party and leadership in the national interest," Mordaunt tweeted.

Tory MPs will vote on Monday, and two candidates will be put forward to the Tory leadership unless one backpedals from the race. The result will be announced on Friday, October 28.

Notably, Truss became the shortest-serving British PM after she stepped down just 45 days after being elected as Britain's leader, stating that she recognizes she "cannot deliver the mandate" on which she was elected. Truss said she would step aside for a new leader to be chosen within the next week.

In view of Truss' resignation, Labour Party leader Keir Starmer issued a scathing statement that ripped into the Conservative Party and called for a general election. "After 12 years of Tory failure the British people deserve so much better than this revolving door of chaos. We need a general election now," he said.