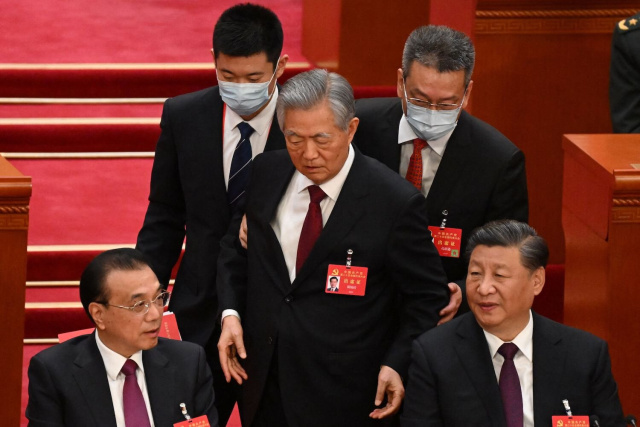 Former Chinese president Hu Jintao was unexpectedly escorted out of the 'Great Hall of the People' in Beijing on Saturday during the closing ceremony of a congress of the ruling Communist Party.

Hu Jintao, 79, was removed by unnamed Chinese Communist Party (CCP) agents during today's closing ceremony of the congress, which is held once in five years. The reason is unclear as to why the Chinese leader was removed, and more details were awaited.

However, information about such incidents is rarely revealed by China.

As Hu was being removed, the former leader looked at Xi Jinping and had a conversation that was not audible to the cameras that captured the moment.

Chinese Premier Li Keqiang was also seen next to Xi, who also remained stone-faced and did not react as the former Chinese president was being removed.

According to a Reuters report, the Chinese Communist Party amended its constitution to make Xi Jinping the "Core" of its party. It is now expected that Xi Jinping will remain the final authority in China.

Xi is widely expected to become Party's General Secretary, paving way for him to secure an unprecedented third term as Chinese president.

The 20th National Congress of the Chinese Communist Party will conclude today.

He will either be re-elected as general secretary of the CCP or will be newly elected as chairman of the CCP, a title that has lain dormant since 1982 and was once the highest position ever held by Mao Zedong.

The congress is taking place at one of the most perilous periods in international affairs in recent years. A war is raging in Ukraine as President Vladimir Putin attempts to burnish his credentials as a great Russian leader, and China remains a staunch supporter of this would-be tsar.

At the same time, Taiwan Strait tensions are at their highest in decades, as China attempts to pummel Taipei into acquiescence.

Moreover, diplomatic tensions with the US, the after-effects of a global pandemic and China's own paranoid efforts to stamp out COVID-19, and all the ingredients for a brewing storm are present.