Day 241 of the Invasion of Ukraine: Air alert across the Country, Russian Strikes in a many Areas 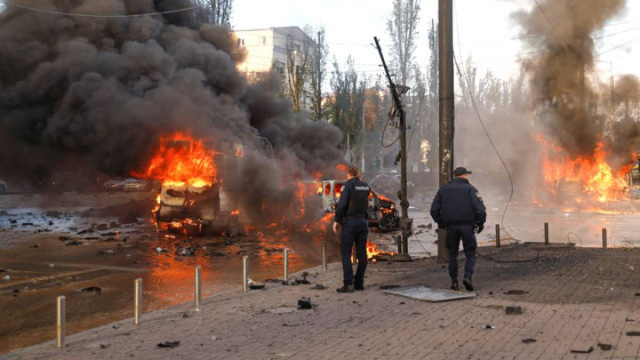 Air alert across Ukraine, Russian strikes in a number of areas

The Russian army attacked targets in Kyiv, Cherkasy, ​​Rivne, Odesa, Poltava regions and other regions. Objects of the energy infrastructure were also affected. The Ukrainian air defense has shot down several missiles aimed at the capital city of Kyiv, announced Mayor Vitaly Klitschko.

President Volodymyr Zelensky announced earlier that more than 150 ships are waiting to export Ukrainian grain, but Russia is deliberately delaying their departure:

"The right to food and to live without hunger are basic rights for absolutely every person on earth. For this reason, Russian attempts to worsen the food crisis are also an aggression against every person in the world."

The Permanent Representative of Ukraine to the UN, Serhiy Kyslytsya, declared for the continuation of the Black Sea Grain Initiative after November 22, when its 120-day period of validity expires.

Russia has demanded an immediate and adequate response from the United Nations to the shelling of the Antonovsky Bridge in Kherson by the Ukrainian armed forces, which killed four people.

Russian forces are preparing for street fighting in Kherson after many of its residents fled, reported the General Staff of the Ukrainian Army. The Ukrainian military has urged the people of Belarus not to take part in the "dirty war" against Ukraine after observers warned of increased military activity in the area of ​​the Belarusian city of Gomel, not far from the Ukrainian border.

Almost half of Ukraine's energy infrastructure is out of order

In the morning, an air alert was declared throughout Ukraine. The leaders of Khmelnytskyi and Kyiv regions report that air defense is working. In the city of Khmelnytskyi, the electricity stopped. Explosions are heard in the Rivne region, where there are problems with electricity.

As a result of increased missile strikes on Ukraine's energy facilities, between 30 and 40% of the country's national energy grid has been affected.

In an interview with Reuters, Ukrainian Energy Minister Herman Glushchenko indicated that due to the strikes on energy facilities, Ukraine has lost 4,000 MW (megawatts) in production capacity. This necessitated the introduction of the current regime, and the authorities urged the population to stock up on warm clothes and blankets. On that occasion, Rosemary Di Carlo, Under-Secretary-General for Political Affairs at the United Nations, warned that the destruction of critical infrastructure in Ukraine and rising gas and coal prices put millions of citizens at risk this winter. "Under international humanitarian law, attacks targeting civilians and civilian infrastructure are prohibited," Rosemary DiCarlo pointed out.

For its part, the European Commission strongly condemned the ongoing Russian attacks on energy facilities in Ukraine.

Ukraine urged Belarusians not to participate in the "dirty war"

The Ukrainian army appealed directly to the people of Russia's ally Belarus with a call not to participate in the "dirty war" against Ukraine, DPA reported.

"We call on the citizens of Belarus not to follow the orders of their leadership to enter the war against Ukraine," was said in a position of Kyiv released yesterday.

Minsk is trying to drag the Belarusian people into the "dirty war" against Ukraine, the address states, and appeals to Belarusian citizens to make the "right choice" and stay away from it.

But if Belarus gets directly involved in the war, "we will respond," the Ukrainian army warned.

Russia's recent deployment of thousands of troops and hundreds of armored vehicles to Belarus has raised new fears in Ukraine that Russian President Vladimir Putin may open a new front in the war against it.

In February, Russian troops entered northern Ukraine from the region of the southern Belarusian city of Gomel, which is located not far from Kyiv. Observers are now reporting increased military activity in the area.

А Russian was detained in Norway for operating a drone

The Norwegian police have detained another Russian citizen on suspicion of operating an unmanned aerial vehicle, Bergensavisen reported.

"He has been detained for operating a drone on Norwegian territory. He was detained by the security police," said a representative of the law enforcement authorities last night.

The Russian was arrested on Thursday and will appear in court today.

It has become clear that the European Union will allocate 18 billion euros to Ukraine for recovery next year. "It is important that Ukraine receives a predictable and stable flow of funds. Kyiv says they need 3-4 billion euros a month to cover their basic needs. This money can come from the European Union, from our American friends and from financial institutions. Therefore, we discussed giving Kyiv 1.5 billion per month. This makes 18 billion for the entire next year - funds that Ukraine can count on", assured the President of the European Commission, Ursula von der Leyen.