Leader of RNM Opposition: Bulgaria treats Macedonia like Russia treats Ukraine, I will Annul the Treaty 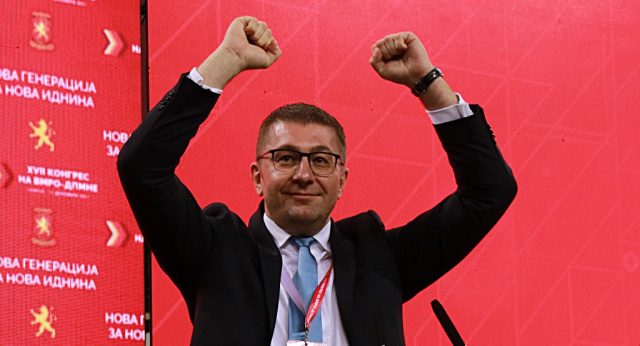 The leader of North Macedonia’s opposition VMRO-DPMNE Hristijan Mickoski compared Bulgaria's policy towards the RNM with that of Russia towards Ukraine, BGNES reported.

The statement was made on state television just a few hours after the National Assembly in Skopje unanimously adopted changes to the Law on Associations and Foundations, as well as the Law on Political Parties. This change directly affects the Bulgarian associations in Bitola and Ohrid - "Tsar Boris III" and "Ivan Mihailov". According to the proposed text, the organizations, associations, foundations, unions and other forms of association registered under the Law on Associations and Foundations are obliged within three months from the entry into force of the legal changes to harmonize their name and/or name, objectives and activities, according to the specified regulations.

"Instead of being our greatest friend and sponsor, they behave like Russia in Ukraine. Just as they deny the existence of the Ukrainian language and identity, so the official authorities in Sofia today deny the Macedonian language and Macedonian identity. They claim that our language is a language norm. Is there a greater insult than that from an EU member state in the 21st century, when we talk about the green transition, about Europe without borders, about artificial intelligence! The only thing we want is to be respected. This is what VMRO-DPMNE wants," Mickoski said.

According to him, "the mistake that was made by the previous government will be corrected by them". "This is the task of the next government. This is the task of VMRO-DPMNE and with the new cabinet we will correct and renegotiate things. Here there must be serious support from the EU as well. Support from the international community is also needed to renegotiate these positions, because these circumstances and positions in which Macedonia finds itself do not give a European future... There is no French proposal. This is a Bulgarian proposal," Mickoski said and added: “We are ready to form a government and start renegotiations with our eastern neighbor for that part that we think does not give future, integration, but assertive, creates tension. It aims to distance Macedonia from the EU. We will insist on negotiations. I hope we will achieve this thing with the support of the international community. But, if we do not find an interlocutor on the other side, then VMRO-DPMNE will gather 61 deputies (in the National Assembly of RNM there are 120 deputies) and we will cancel the Treaty with the eastern neighbor, because this is not a Treaty of friendship and good neighborliness and this is clearly visible from the recent actions of the eastern neighbor," said the leader of VMRO-DPMNE.

The Parliament in Skopje unanimously voted a bill against Bulgarian associations

At yesterday’s meeting, the deputies from the parliament of the Republic of North Macedonia approved the introduction of the draft law proposed by the opposition VMRO-DPMNE to amend and supplement the Law on Associations and Foundations.

The proposal was accepted unanimously by all 84 MPs present without a single "against" or "abstention".

The document was presented by Rashela Mizrahi from VMRO-DPMNE, who noted that there must be an end to the opening of associations and foundations whose programs, goals, activities and actions are aimed at the violent destruction of the country's constitutional order, at incitement to military aggression, as well as inciting national, racial, religious hatred or other intolerance, intolerance, hatred, genocide, extermination, spreading or aiding, inciting and supporting fascism, Nazism, National Socialism and the Third Reich, as well as undertaking activities related to with terrorism or activities contrary to the Constitution.

"In the last seven months, we have witnessed the opening of so-called cultural clubs named after controversial personalities, Nazis and fascists. This law should put an end to the opening of such associations and foundations. With the amendments, it is proposed that the names, surnames, nicknames, pseudonyms, abbreviations and initials of persons who in any way, manner or form in the past have been associated with a racial, religious, national, ethnic and other bigotry, intolerance, hatred, genocide, extremism, spreading or supporting fascism, Nazism, National Socialism and the Third Reich," Mizrahi stressed.

According to the proposed text, the organizations, associations, foundations, unions and other forms of association registered under the Law on Associations and Foundations are obliged within three months from the entry into force of the legal changes to harmonize their name and/or name, objectives and activities, according to the specified regulations.

With the new law, it will not be possible to use names like "Tsar Boris" or "Tsar Ferdinand".

"These associations are not financed by the members of the associations, nor by the Bulgarian Ministry of Foreign Affairs, but by a foundation, where the main financier is a Bulgarian oligarch who is present in the medical business. This is the main issue for the Intelligence Agency, the National Security Agency and financial intelligence. What are these three institutions doing," said the deputy chairman of VMRO, Alexander Nikolovski, and called on the authorities to "put a black stamp on Vrabevski".

The Deputy Prime Minister for European Affairs Bojan Marichic supported the calls to change the legislation regarding the work of civil associations and foundations. "The opposition's initiative to change the law deserves to be discussed. Marichic announced that the government has no intention of rushing to include Bulgarians in the Constitution of the RNM.