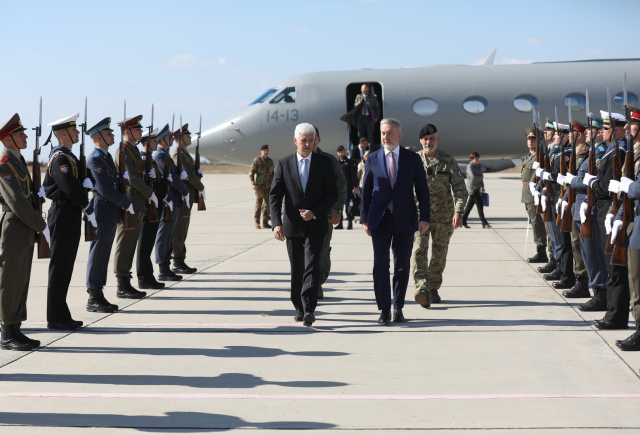 An official ceremony of assuming the role of a framework state by Italy of the battle group on the territory of Bulgaria was held yesterday, October 17, at the “Novo Selo” Training Ground.

The President and Supreme Commander of the Armed Forces Rumen Radev accepted the formation, composed of blocks of Bulgarian and Italian servicemen from the combat group.

"Just three months ago, the Alliance adopted its new Strategic Concept, which defines the threats and risks to our security and outlines new approaches and solutions to ensure that the war in Ukraine does not extend its territory. That the member states bordering on the conflict will be able to rely on the collective security system," President Rumen Radev said in his speech.

"Participation in the battle group is a symbol of the resilience, strength and resolve of the Alliance," said NATO's Supreme Allied Commander, General Christopher Cavoli.

"The battle group is a symbol of NATO's principles of shared responsibilities and of the pursuit of peace and freedom," Italian Defense Minister Lorenzo Guerini said in his speech. He emphasized that the friendship between the Italian and Bulgarian peoples is an expression of the growing unity in Europe and thanked for the hospitality, for the contribution of our country to the collective security, for the professionalism of the Bulgarian military personnel. Minister Guerini noted that Italy's participation in NATO missions and initiatives in Bulgaria, Slovakia, Romania and Hungary is an extremely necessary and inevitable response to the security threats that arose from the aggression of one country towards another sovereign country, from the aggression of Russia against Ukraine. "We all want peace, we all believe in peace, we all work for peace, but achieving it depends on the balance of power and that is something that only the transatlantic alliance can guarantee," he said, noting that the alliance's Southeastern flank is of strategic importance for the union.

Minister Dimitar Stoyanov awarded three Bulgarian and three Italian servicemen for their contribution and services to the assembly of the combat group on the territory of the Republic of Bulgaria. Major General Francesco Bruno, Commander of the Acqui Division, Admiral Alberto Sodomaco of the General Staff of the Italian Defense and Colonel Massimiliano Mongillo of the Joint Operational Command of Italy were awarded the "For Contribution to the Ministry of Defense" award. Lt. Col. Velin Kehaiov, Col. Boyko Markov from the Strategic Planning Directorate and Col. Vasil Enchev, Deputy Chief of Staff for Operations of the Land Forces, were awarded with a plaque of the Ministry of Defense. 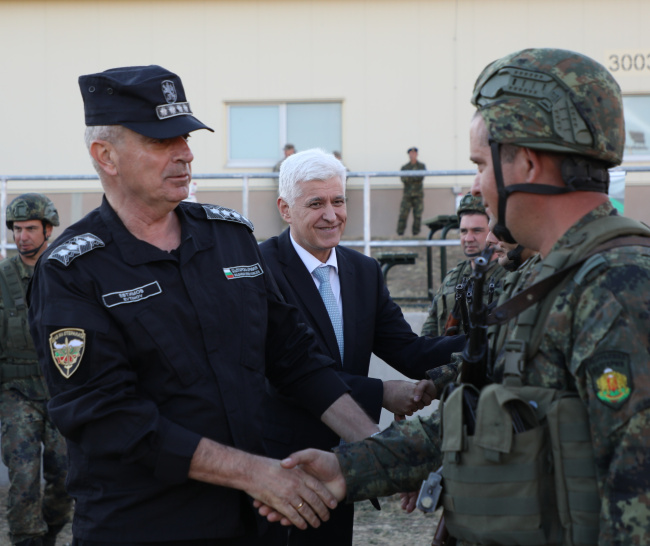 "There is an urgent need for funding and modernization of the Bulgarian army, so that we can overcome the technological gap between the Bulgarian and allied NATO armies," said Defense Minister Dimitar Stoyanov in response to a journalist's question. He announced that the goal of the Ministry's military and political leadership is for defense spending to reach 2% of GDP in next year's budget. "Our NATO allies are already talking about 2.5 percent of GDP, with the vision being to get to 3 percent in 2030. You see how big the gap is." We are still fighting for 2%", commented Minister Stoyanov.

The Chief of Defense Admiral Emil Eftimov emphasized the significant efforts made to build and transform the battle group from a national to a multinational scale with a framework state. "This is the first step. Our level of ambition is to quickly transform this battle group into a brigade in case of need," he stated. The Chief of Defense outlined the two key elements - the modernization of the Bulgarian Army and the construction of the relevant infrastructure, which would create conditions for the allies to quickly strengthen our potential if necessary.

Admiral Eftimov pointed out the motivation of the servicemen as the most important condition for the realization of the goals. "If there is no motivation, neither the old Soviet weapon nor the most modern weapon can be used effectively and give the necessary defensive potential. Here at the range, our Soviet-era artillery trains with modern unmanned systems," the defense chief said.

The deployment of permanent collective defense battlegroups on the territory of NATO's eastern flank member states contributes to the provision of additional forces on the ground to strengthen defenses. The creation of the battle groups is a clear sign of the Allies' commitment to the defense of each Alliance member country. It also helps to overcome existing capability deficits. The battle group on the territory of Bulgaria is also a positive factor for regional security and stability.

The achievement of full operational capabilities by the multinational battle group is planned by the end of 2022. The remaining countries that have confirmed participation with military personnel in the composition of the battle group are the United States, Albania, Greece, Montenegro, the Republic of North Macedonia and Turkey. Their common contribution, together with the Bulgarian military personnel, is a manifestation of union solidarity and investment in collective defense at a difficult time for all.

The battle group is expected to participate in NATO exercises.