First Cancer Vaccines could be widely Available before 2030 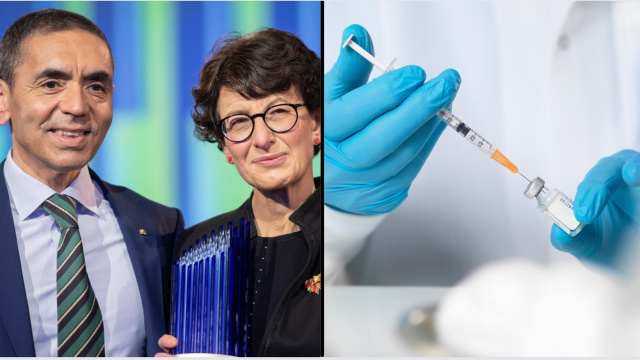 Vaccines to fight cancer will be widely available before 2030, say husband and wife Prof. Ugur Şahin and Prof. Özlem Tureçi, creators of one of the most successful vaccines against COVID-19, writes in the New York Times.

Lessons learned from the pandemic will accelerate cancer treatments based on mRNA technology, they say.

The couple founded the company BioNTech in Mainz, Germany, in 2008 to work primarily on cancer. When the pandemic began, they changed the focus of their development to create a vaccine against the coronavirus in collaboration with the pharmaceutical giant Pfizer.

Their vaccine uses mRNA that binds to the spike protein of the coronavirus, teaching immune system cells to recognize and fight it.

“What we have been developing for decades to create a cancer vaccine has facilitated the emergence of the COVID vaccine. Now we return to the main goal in our scientific work - the creation of a vaccine against cancer", Prof. Tureçi told the BBC. She emphasizes that it was the experience of the pandemic that gave them more knowledge about how to produce vaccines more quickly and efficiently, as well as observations of the immune system's response to mRNA vaccines in large numbers of people.

According to Prof. Şahin, cancer vaccines will be widely available before 2030. "Scientists tend to be humble," adds Prof. Tureçi, "because nature and biology have so many secrets," but each step in the treatment effort helps them to "understand more about what we're up against and how to deal with it". She admits that scientists are always hesitant to announce that they have a cure for cancer. "We have a number of breakthroughs and we will continue to work on them", says the scientist.

Cancer vaccines will work similar to the one against COVID - they will teach the human body to produce antigenic molecules found in the tumor so that it can recognize and clear any cells left after it is removed.

In June, at the American Society of Clinical Oncology conference in Chicago, BioNTech presented the results of an early-stage study in patients with pancreatic cancer. Half of the 16 volunteers who received the vaccine were cancer-free 18 months after the tumor was removed. The remaining eight had no T-cell response—six died or their cancer came back.

Pancreatic cancer is the most common fatal cancer, with 90% of patients dying within two years of diagnosis. A similar trial is also being conducted in patients with bowel cancer.

Many companies have cancer vaccines in clinical trials. Some are customized, directly targeting proteins from a patient's tumor, and others simply target antigens commonly found in their type of cancer.

Just as science was our way out of the pandemic, science is our way out of cancer. We are optimistic that in the future we will see mRNA technology and other exciting vaccine approaches that give doctors more treatment options to defeat cancer, commented Dr. Sam Godfrey, an expert at the largest independent organization whose research is dedicated to of oncological diseases - Cancer Research UK. - A "cancer vaccine" sounds like a miraculous prospect, but it's closer to reality than you think. We already use vaccines to deal with viruses that are known to cause cancer, says Dr Godfrey.

The next generation of cancer vaccines aims to vaccinate people who have already had cancer as a prevention against the disease returning.

There are different approaches in the development of these preparations. In BioNTech's case, the vaccine will use mRNA to teach the body to recognize antigens or chemical markers found in a patient's tumor. If tumor cells remain in the body after the carcinoma is removed, the immune system must recognize and destroy them.

Other cancer vaccine companies are taking a less personalized approach by teaching the body to detect and attack antigens that are generally found in tumors instead of those in the patient's own specific carcinoma.

Scientists admit there are still challenges to overcome, such as the fact that cancer cells suppress the immune system, as well as some traditional cancer treatments. This can make it harder for the immune system to find and destroy cancer cells, even if the vaccine "teaches" it to do so.

Three years ago, the idea of ​​producing a vaccine against a new virus in a few months seemed almost a fantasy. It would not be crazy to bet on scientists in the fight against cancer, summarizes the "New York Times".