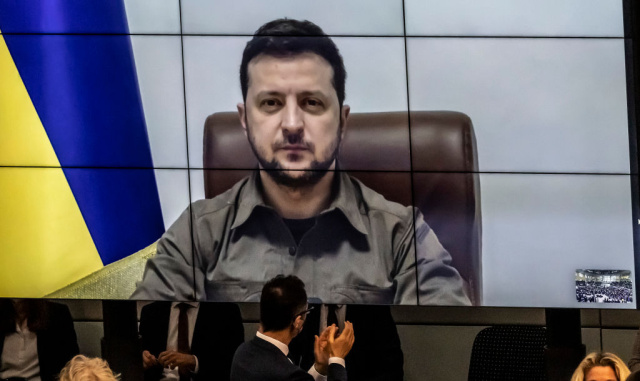 Ukrainian President Volodymyr Zelensky will not be invited to give a speech at the opening of the 48th National Assembly. This was explained by the deputy of “Democratic Bulgaria” Nadezhda Yordanova.

Today, the parties met at the suggestion of GERB-SDS to discuss such a possibility.

"We decided at the first presidential council that a decision should be made to invite President Zelensky to address the Bulgarian parliament, according to his program and the program of the National Assembly," Yordanova said.

According to DB, the best way to issue such an invitation is after the constitution of the National Assembly. Then the issue of providing weapons to Ukraine will be raised. "On the very first working day, Democratic Bulgaria will submit a proposal for a decision on providing military aid to Ukraine," Yordanova said.

"The issue of Mrs. Mitrofanova (Russia’s ambassador to Bulgaria) and her presence at the first meeting is in the interest of the dignity of the Bulgarian state and is not a side issue for society, categorically," declared Nikola Minchev from "We Continue the Change".

"On specific topics with GERB, we have coincidences of views, but this is not a basis for a coalition," Minchev also said. He was categorical that the PG of "We Continue the Change" is united.

"People ask us how long we will deal with the problems of Ukraine and when we will start dealing with the problems of Bulgaria", said the leader of "Vazrazhdane" Kostadin Kostadinov. Representatives of the party were not at the meeting initiated by GERB-SDS, but Kostadinov arrived specifically to speak to the media waiting in front of the building, BGNES reported.

"I think that there will be no hearing of Zelensky, because I think that common sense will prevail. But if they agree on it, we will invite the Russian and Belarusian ambassadors to come," threatened Kostadinov. And he added that each parliamentary group had the right to invite up to five guests.

"Bulgarian Rise" also came out with a position.

"We, the deputies from the ‘Bulgarian Rise’ coalition, believe that our voters want to hear as a matter of urgency how we will begin to solve their immediate problems such as rising prices, inflation and the overall economic crisis. They expect a working government to be formed. Instead, the preparatory meetings for the opening of the National Assembly are being politicized. Let's leave the discussion of all political issues for the plenary hall - the deputies will take an oath to serve their people in just a few days and will be able to officially debate and make decisions of national interest", stated "Bulgarian Rise".