President Radev: I Expect that Soon the Parties will Focus on the Real Problems of Bulgarians 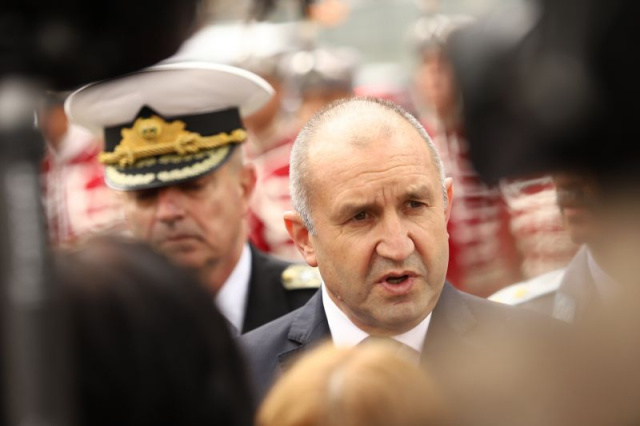 “I expect that soon the parties will return their focus to the real problems of the Bulgarians”. This is what President Rumen Radev said today in front of the media.

“It is high time we realized that a war is raging in Europe. How to guard our sky? You know which Bulgarian politicians left Bulgaria without planes, ask them”, Radev addressed the media in response to a question about the requested offers from Sweden, France, Israel and the USA for renting or buying planes for the Bulgarian Air Force.

“During the upcoming consultations on the formation of the government, I will seek an answer from the parties on what solutions they propose to guarantee our air sovereignty because we will not have an operationally ready squadron for many years to come”, Radev said.

He announced that if Bulgaria receives favorable proposals, a project for investment expenditure will be prepared and submitted to the National Assembly.

“Only the National Assembly can make a decision. The responsibility lies with the people's representatives”, said the head of state.

Regarding the non-invitation of the ambassadors of Russia and Belarus to the opening session of the 48th National Assembly, a topic on which a consensus was reached on Thursday between GERB, “We Continue the Change”, “Democratic Bulgaria” and DPS, Radev said:

“It is humiliating for the political process in Bulgaria to be subordinated to the dilemma of whether an ambassador should be present or absent at the opening of the National Assembly. I expect that soon the parties will return their focus to the real problems of Bulgarians - poverty, prices, the budget, the protection of the socially weak.”

”As for President Zelensky's address, I have the feeling that the parties are competing to see who will put the problems of the Bulgarians behind them faster“, said Radev.

“If there is no regular government, it means no parliament. We must be optimistic. The parties must decide - a government at any price with many compromises and the risk of a quick collapse or going to new elections”, the president also said.

Radev congratulated the services and the office for clarifying the case and the categorical answer in connection with the explosion of the Crimean bridge and the mentioning of Bulgaria.

The President recalled that he had given the parties enough time to put aside the opposition and reach a dialogue. He called for this time to be used wisely.

“On finding common interests in the name of our society depends whether there will be regular government. After the National Assembly is constituted, I will announce when I will hand over the first mandate. The parties should look for areas of unification on their opinions”, Rumen Radev also stated.

“All levels of the government are working on our entry into Schengen”, Radev also commented and recalled that the question was raised at the meeting in Prague.

“We have an understanding from all our partners that this is extremely important”, he added.

The President congratulated all Bulgarian pilots on Aviation Day. “The Bulgarian Air Force is a bright example of courage, self-denial and patriotism, which we need so much today”, he said.