Day 233 of the Invasion of Ukraine: The Ukrainian Army has Liberated over 600 Settlements in the Last Month 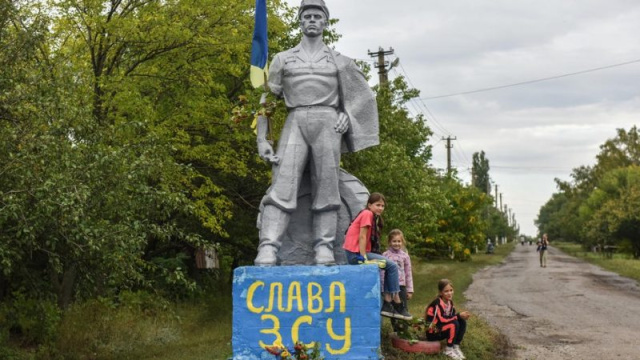 Ukraine continues to reclaim settlements in Russian-occupied territories, and Moscow-appointed Kherson authorities have urged residents to evacuate amid the Ukrainian offensive.

The Ukrainian army has liberated more than 600 settlements in Russian-occupied territories in the past month, including 75 in the strategic Kherson region, said Ukraine's reintegration ministry. At the same time, Moscow reported that the government has decided to help residents of the occupied territories in the Kherson region who want to go to other regions of Russia.

Ukrainian President Volodymyr Zelensky has said he will establish a special tribunal for crimes committed during Russian aggression against Ukraine. In his midnight address, Zelensky pointed out that a record number of countries supported Ukraine in the UN-voted resolution condemning Russia's actions.

"The world is seeing what's happening. It knows the cost of the farce that Russia is organizing in the occupied territories under the guise of sham referendums. 143 UN member states supported the resolution, which defends the basic principles of the UN Charter and condemns Russia for its criminal attempt to annex our territories."

The head of the presidential office, Andriy Yermak, demanded that the Red Cross visit the prison in the town of Olenivka, Donetsk region, in the next three days. According to the Ukrainian authorities, conditions in the prison, which has been under Russian control since 2014, are extremely harsh. Many members of the Azov Battalion, which were the last defenders of the city of Mariupol, are held there, and in July dozens of prisoners were killed in a rocket attack on the facility, which Moscow and Kyiv blamed on each other.

Civilians are taken out of Kherson with the advance of Ukraine: they had to be "saved" in Russia for "rest and training"

Volodymyr Saldo, the Russian-proclaimed leader of Ukraine's Kherson region, called on the civilian population to evacuate because of "daily rocket attacks by advancing Ukrainian forces." According to Saldo, people should "save" themselves in Russia by going there for "rest and training". For this purpose, he asked for help from Moscow, the BBC reported.

His call was later supported by Russian Deputy Prime Minister Marat Khusnulin in a message on state television.

In a video message, Saldo called on civilians to leave Kherson region with their children.

"The government has decided to organize assistance for the departure of the residents of the Kherson region to other regions of the country. We will provide everyone with free accommodation and everything necessary," announced Khusnulin.

Ukraine rejects Russian accusations that its strikes are targeting its own civilians.

Today, the first group of people from Kherson is expected to arrive in Russia's Rostov region, its governor Vasily Golubev said, quoted by the Russian state news agency TASS. Golubev assured that the district is prepared to receive and accommodate all those who come from the Kherson region.

The Armed Forces of Ukraine (VSU) recently retook some areas of northwestern Kherson, approaching the regional capital of the same name. Among other weapons, Kyiv has used US-supplied HIMARS missile systems to great effect. They target key Russian military sites and threaten to cut off most of the occupation forces on the west bank of the Dnieper River.

Representatives of Moscow's elite are discussing a possible revolution in power in a way they have never done in 20 years.

This was written for the Washington Post by Catherine Belton, a journalist and author of the book "Putin's People. How the KGB Took Russia and Then Faced the West."

In support of her claims, she cites an anonymous government official.

"We have begun to enter a revolutionary situation. Everyone is waiting for something different from what is happening now: a different leadership, a different war. The hawks want tougher action. The doves do not want war at all. The time is ripe for a change in the political system. But how it will come on, I don't know".

Since the Ukrainian army began liberating vast swathes of territory in September, Putin has been pushed to the wall, forced to send hundreds of thousands of barely trained reservists to try to shore up Russia's depleted army. The move sparked protests across Russia and convinced hundreds of thousands of men that they would be better off seeking salvation outside the country's borders, Belton said.

"No one is happy with the status quo," explains the Russian civil servant. "It is clear that military or political victory will not be possible. But neither is defeat. This becomes the situation in chess known as zugzwang, where each move is worse than the next and yet it is impossible not to move".

The optimism of the summer, when, according to a second civil servant, many in the country's elite believed "we were going to turn it around" has completely evaporated.

"People see that there is no future," he adds.

The forced mobilization has already dealt a blow to Putin's popularity, one of the foundations of his legitimacy as president. When the bodies of reservists begin to return from the front, the situation may worsen, a Moscow businessman told Belton.

"In a few months, there will be a very negative dynamic in Russia: deterioration of the mood in society," he adds. "Everything depends on the front".

"Putin's arsenal of possible actions is very limited," points out Sergey Aleksashenko, a former deputy governor of the Russian central bank who now lives in exile in the United States. "Besides hitting civilian infrastructure, he only has the option of using a tactical nuclear weapon. If the Ukrainian counterattack continues, the question of what to do next remains before Putin."

But few in Moscow believe that Putin will resort to the use of a tactical nuclear strike, despite the Kremlin's threats, the Moscow businessman assures. Because "then he won't have any cards left". At the same time, China can block this kind of escalation.

"It's a Pandora's box that the Chinese don't want to open," he said.

Saudi Arabia's support for oil production cuts this winter appears to have encouraged the Russian president, one of Belton's sources said. Even if energy prices remain at the same level, Putin "thinks that Europe will be in crisis and there will be no time for Ukraine." Gazprom Chief Executive Alexei Miller warned on Wednesday that "entire cities" in Europe could freeze and said there were no guarantees that Europe would survive the winter with current levels of gas reserves.

But economists and business executives say the sanctions are starting to hit the Russian economy harder.

"The whole business is suffering from what is happening. Everyone has frozen their investment plans," explains a representative of the Moscow business elite.

The Russian president "will run out of money", emphasizes Sergey Guriev, rector of Sciences Po University in Paris. And adds:

"He needs money to pay Iran and North Korea for weapons. In December we will see a completely new reality."

The President of Belarus, Alexander Lukashenko, has made a principled decision to conduct a "covert mobilization" in his country. This was announced by the local independent media "Nasha Niva", citing several sources.

The number of people expected to receive subpoenas is not yet known.

Alexander Lukashenko decided not to publicly announce the mobilization. This was done in view of the consequences of such a decision in Russia. The "covert mobilization" would take place under the guise of more frequent checks of the army's combat readiness.

"The recruitment of up to 2,000 people would mean additional manning of personnel, more often for narrow combat tasks, such as artillery," an officer of the Armed Forces of Belarus told Nasha Niva. "It will have to be announced if the number of mobilized exceeds 5,000. This will mean the creation of a battle group in some direction. If they exceed 10,000, there will be several groups," he added.

"Nasha Niva" knows for sure that so far only residents of small regions of Belarus receive subpoenas. The big cities have not yet been affected by the first wave of "covert mobilization".

"The greatest emphasis falls on those military reporting specialties that are in short supply in the Russian army," informed sources say.

Lukashenko publicly announced on October 10 that Belarus would enter the war only in the event of an attack on its territory. At the same time, the regime's propaganda channels are constantly alarming the population that such an attack by Ukraine is bound to happen, as the West has pressured the Ukrainian authorities to do so.

At the same time, Lukashenko announced that "more than a thousand" Russian soldiers would arrive in Belarus and acknowledged the participation of Belarus in a "special military operation". Earlier, "Nasha Niva" sources reported that a significant number of Russian conscripts are expected to arrive at the Belarusian training grounds.

"According to my information, preparations are underway for the reception of Russian mobilized in Belarusian training centers and military units. We have places for training and instructors. Perhaps Russia demands from Lukashenko that part of the training of the mobilized Russian military take place in Belarus," noted one of the sources of the media.

Other interlocutors drew attention to the strikes from the airspace of Belarus and the attempt to seize Kyiv and the northern part of Ukraine in February 2022, which was undertaken from the country's territory.

"The Ukrainians have every reason to prevent a second attack on Kyiv, which, judging by indirect signs, may be now being prepared. At the same time, any preemptive strike against the Russians in Belarus can be interpreted as an attack on Belarus," said one of the sources.

At the beginning of the war, Alexander Lukashenko predicted that it would end with a Russian victory "in three or four days". The failure of the Russian army came as a surprise to the dictator. Pro-regime media in Minsk continue to insist that Russia's victory is inevitable. Lukashenko himself has repeatedly said that "Russia cannot lose". And Belarusian intelligence, apparently, did not expect that the Ukrainians would launch a counteroffensive in Kharkiv, Kherson and Donbas.

In Minsk, they still believe that Russia and Belarus will win. The head of the State Security Committee, Ivan Tertzel, in a recent speech, even specified when the "breakthrough" will begin - November 2022. If the "covert mobilization" begins now, it may end by mid-November.