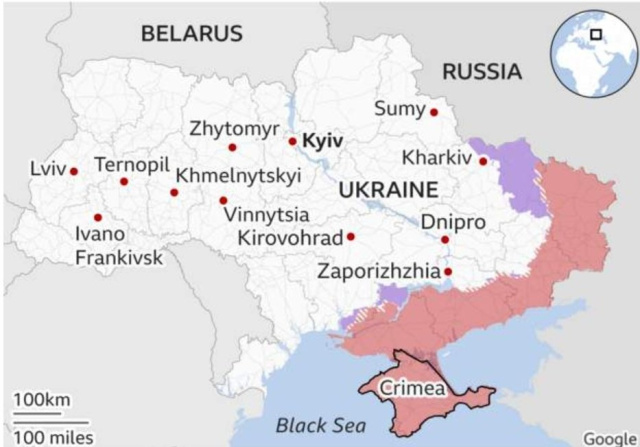 Over 30 people were injured in Kyiv as a result of the enemy shelling; the number of dead is being specified, spokeswoman of the Ukrainian State Emergency Service Svetlana Vodolaga told Ukrinform today.

According to her, rescue teams are working simultaneously in several places in the capital.

Due to massive Russian missile strikes today on populated areas across Ukraine, transport has been halted in the western city of Ivano-Frankivsk and people are being asked to work online. This was announced on Facebook by the head of the city administration, Ruslan Martsinkiv, quoted by Ukrinform.

Russian missile attacks have been reported in multiple cities across Ukraine, including in Dnipro (pictured), Lviv, Zhytomyr, Khmelnytsky and Ternopil pic.twitter.com/9bXCN0XZQ5

In Lviv, also in Western Ukraine, a Russian missile hit a critical infrastructure and there is no hot water, and part of the city is without electricity, the chairman of the city council, Andriy Sadovy, reported in "Telegram". The work of the city thermal power plants has been temporarily suspended. Back-up power generators to several pumping stations have been switched on to restore Lviv's water supply. The traffic lights are not working in the city and after the cancellation of the air alert, traffic controllers will be sent to the major intersections.

Over Kryvyi Rih in the Dnipropetrovsk region, the Ukrainian air defense has shot down Russian missiles, the head of the local military administration Oleksandr Vilkul reported in Telegram, as quoted by Ukrinform. The population has been ordered to stay in shelters until the air raid alert is lifted.

At least 4 civilians killed after missile attack on Dnipro city

In Konotop, the main city of the northeastern Sumy region, there were also explosions from rocket strikes, the head of the regional military administration reported in "Telegram". People are called to stay in the shelters, Ukrinform pointed out.

According to Ukrainian Prime Minister Denis Shmygal, 11 important infrastructure sites in eight regions and in Kyiv have been hit and damaged so far, Reuters added.

The visa department of the German consulate also suffered during the massive Russian attacks on the Ukrainian capital, reports Bild

Deputy Defense Minister Hanna Malyar said that between 6:20 a.m. and 11:15 a.m., Russia fired 83 missiles at Ukrainian cities, 43 of which were shot down by the air defense system.

Yuriy Ignat, a representative of the Air Force Command of Ukraine, also announced the missiles:

◾️ with Kalibr missiles from the Black Sea According to pro-Russian Telegram channels, the list of cities hit is as follows: