Bulgaria: "We Continue the Change" did not accept GERB's offer - they remain Opposition 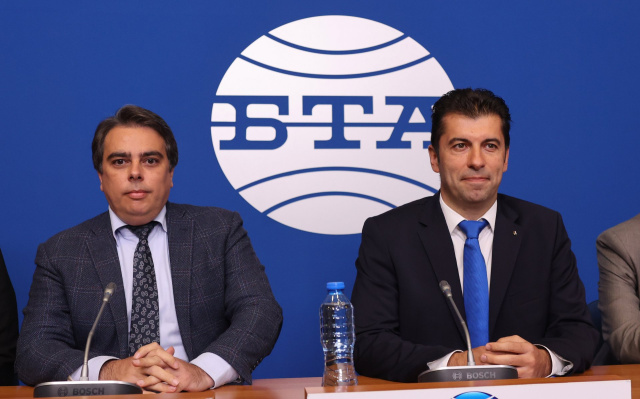 The co-chairman of "We Continue the Change" Asen Vassilev rejected the offer of GERB’s leader Boyko Borissov for the formation of a Euro-Atlantic government with clear priorities.

"We remain a constructive opposition to GERB. We will not join a coalition of theft," he announced at a press conference in BTA.

"From here on, the mandate holder has the opportunity and the right to form a cabinet, just as we, as the winners of last year's elections, made a very difficult and complex coalition," he explained.

According to Vassilev, the most important thing for Bulgaria at the moment is to have a stable government.

"We will be a constructive opposition, we will not prevent the formation of a cabinet. We have constructive policies, which we hope will be proposed and voted on in the parliament," declared the other co-chairman of WCC Kiril Petkov.

He was categorical that after their decision not to enter into a coalition with GERB, this will not split their party and the deputies.

According to him, the most important thing for the Bulgarians right now is how they will get through the coming winter.

Kiril Petkov also listed the policies behind which they stand, these are:

- Law on the anti-corruption commission with investigative functions;

- Mechanism for the investigation of the chief prosecutor by a Bulgarian judge;

- 20% increase in pensions so that they outpace inflation;

- Two tariffs for electricity, water and heating based on consumption;

- Raising the tax credit for families with children to 50%;

- A ceiling on the price of electricity for businesses of BGN 250 per megawatt hour;

- Ceiling for the price of gas;

- Teachers' salaries should continue to be 125% of the average salary

- Preservation of the currently existing tax policy - budget deficit up to 3%, support for Bulgaria's entry into the Eurozone and Schengen;

- The adoption of 22 laws concerning the implementation of the Recovery and Sustainability Plan.

Kiril Petkov insisted that it is not the job of the caretaker government to solve the issue of new planes and this issue should go to the parliament.

He was adamant that there was no truth in the rumors that the American embassy was pressuring them to form a government with GERB.

"The main lesson we learned from the elections is that if we want to see the citizens in the squares, shake their hands, talk to them, we must fulfill what we promised them," added Asen Vassilev.

He was categorical that early elections are not good for Bulgaria at this moment. Vassilev answered a question from BNR that their party will not lose its confidence in President Rumen Radev, who has already called on the parties to agree and form a working government.

"Trust is not given by political parties, but by the Bulgarian people," Vassilev said.

"We have shown that governance without GERB is possible and good for the country, perhaps we failed to convince people to continue supporting us," he added.

"We are aware of our role as a second political party and it is not right to replace the voters' vote through different constructions," insisted Kiril Petkov in turn.

He concluded that WCC is the instrument that will really change Bulgaria: "The road may be long, but we will reach the cherished point for a changed Bulgaria".

Politics » Be a reporter: Write and send your article
Tags: We continue the change, GERB, Vassilev, Petkov
Advertisement
Advertisement
Expats.bg All Are Welcome! Join Now!
Related Articles:
More from Politics