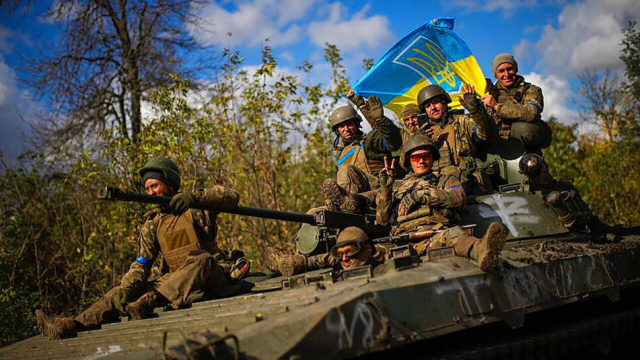 Russian kamikaze drones have attacked settlements in Kyiv region, local authorities claim. There are reports of fires and one casualty.

The Ukrainian army continues its successful advance to the south and east. Russian troops withdraw from their positions along the Dnieper. According to data from the Ukrainian Ministry of the Interior, at least 50 settlements were liberated in the last 48 hours. There is no room for panic, said the head of the pro-Russian administration in Kherson - Kiril Stremousov. In his midnight address, President Zelensky stated that it is only a matter of time before the Russian occupiers are expelled from Ukrainian lands. He thanked his American counterpart, Joe Biden, for his continued military and financial support for Kyiv.

"Today we have good news - both from the battlefield and from the diplomatic front. First: the Ukrainian army has made rapid and significant progress in the southern parts of the country, which is part of the ongoing offensive. Since the beginning of the week, a dozen villages have been liberated after the fake Russian referendums in them. The liberated towns and villages are located in Kherson, Kharkiv, Luhansk and Donetsk regions," said Volodymyr Zelensky, President of Ukraine.

Ukrainian forces have liberated a key village in the southern Kherson region, prompting another retreat by the Russian army.

In a phone call, US President Joe Biden told his Ukrainian counterpart Volodymyr Zelensky that the US is providing Kyiv with new military aid in the amount of $625 million, including HIMARS systems.

The Ukrainian flag has already been raised over the village of Davidov Brod. Several other nearby villages were also reported to have been liberated. Ukrainian forces have captured the town of Dudchany on the west bank of the Dnieper River in their major push into the Kherson region, according to the Russian-appointed head of the administration.

To the east, Ukrainian forces are advancing after capturing Lyman, the main Russian bastion in northern Donetsk region, over the weekend.

The pro-Russian leader in Donetsk said forces were forming a new defensive line around the town of Kremennaya. The latest Russian setbacks come as President Vladimir Putin is expected to sign decrees annexing four Ukrainian regions amid ongoing fighting.

Yesterday, the Upper House of the Parliament in Russia unanimously and without debate approved the annexation of the territories controlled by the Russian army in Ukraine. A day earlier, the laws received the unanimous support of the State Duma. The annexations have no legitimacy under international law, and Ukrainian President Volodymyr Zelenskyi has declared them invalid.

In his evening video address, Zelensky again stated that the Ukrainian forces will not stop until they liberate the country from the occupiers:

"The Ukrainian army is carrying out a fairly quick and powerful offensive in the southern part of our country within the framework of the current defense operation. Just this week, after the Russian pseudo-referendum, dozens of settlements have already been liberated - in Kherson, Kharkiv, Luhansk and Donetsk regions. Our soldiers did not stop. And it is only a matter of time before we drive the occupier from all our land."

The Ukrainian president thanked his American colleague Joe Biden for the continued military and financial support of the United States.

Washington's decision to send more military aid to Ukraine poses a threat to Moscow's interests. This is what the Russian ambassador to the United States, Anatoly Antonov, wrote in a Telegram comment, Reuters reported.

In his words, "supplies of military products from the United States and its allies not only lead to prolonged bloodshed and new victims, but also increase the danger of a direct military confrontation between Russia and Western countries."

US President Joe Biden pledged a new $625 million security aid package to Ukraine on Tuesday, prompting a warning from Moscow that such a move risks direct military conflict between Russia and the West, Reuters reports.

The US package will include the High Mobility Artillery Missile System (HIMARS) launchers used in Ukraine's successful counteroffensive that recently forced Russian troops to retreat in eastern Ukraine.

Biden "committed to continuing to support Ukraine while defending itself against Russian aggression for as long as necessary," was added in the statement.

The aid package is the first since Russia's latest announced annexation of Ukrainian territory and the second presidential mandate (PDA) since Ukraine's major battlefield victories in mid-September.

The Russian ambassador in Washington, Anatoly Antonov, called on Washington to stop "provocative actions" that could lead to "serious consequences" on his Telegram channel and warned that Biden's proposal fuels the danger of a direct military confrontation between Russia and the West.

"We perceive this as an immediate threat to the strategic interests of our country," the diplomat wrote.

"Recent developments from Russia's fake referendums and attempted annexation to new revelations of brutality against civilians in Ukrainian territory formerly controlled by Russia only strengthen our resolve," US Secretary of State Antony Blinken said.

Scholz: Germany will have energy security without Russian gas

Germany will be able to guarantee its energy security despite the events related to Nord Stream, German Chancellor Olaf Scholz said at a press conference today.

"It is likely that Germany will be able to guarantee its energy security, even though gas is no longer flowing from Russia to Germany through pipelines and that we have learned about the dramatic destruction of some of them in the Baltic Sea," he said. The German chancellor mentioned that Berlin and the federal states have reached an agreement to stabilize the energy crisis through aid packages worth 250 billion euros.

On September 26, terrorist attacks were carried out against two Russian gas pipelines for the export of gas to Europe - "Nord Stream" and "Nord Stream 2". Germany, Denmark and Sweden do not exclude the possibility of targeted sabotage. Nord Stream AG said the pipeline breakdowns were unprecedented and a timeline for repairs could not be determined.

Gazprom announced on October 3 that the pressure in the damaged strands of the Nord Stream and Nord Stream 2 gas pipelines had stabilized, gas leakage had stopped, and gas was being pumped from another strand of Nord Stream 2 to guarantee its integrity.

North Korea supports the annexation of the four Ukrainian territories

The Ministry of Foreign Affairs of the DPRK supported the results of the referendums that Russia held in the four occupied territories in eastern Ukraine, world agencies reported.

This was reported by the Central News Agency of North Korea.

"We respect the will of the residents of the Donetsk and Luhansk People's Republics, Kherson and Zaporizhzhia regions, who wished to join Russia, and we support the position of the Russian government to accept these regions into its composition," the statement said.

So far, the DPRK is the only country that supports the results of the referendums.

Yesterday, the Federation Council ratified the agreements on the accession of the territories to Russia.