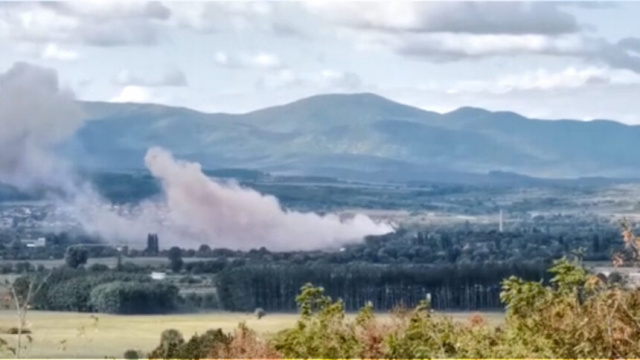 Two women, aged 53 and 43, are still missing after the explosion in the workshop at the Arsenal weapons plant. Rescue operations and debris clearance have not yet begun, as there is a risk of a secondary explosion. This was stated to the media by Todor Deyanov, appellate prosecutor of Plovdiv.

A specialist counter-terrorism squad is currently traveling to secure the perimeter and lead the operation to clear the remains and search for the two women. It is not known if they are alive. They are probably under the debris.

As a result of the explosion, the body of a 55-year-old man - one of the three workers in the workshop - was found. The workshop was totally destroyed, said Deyanov. A 43-year-old woman who was near the workshop was also injured. She has a brain injury and was transported to "St. Ivan Rilski" hospital in Sofia. Her condition is serious.

The incident happened around 11:06 a.m. today. The signal on emergency number 112 was submitted at 11:13 a.m. An immediate pre-trial proceeding was initiated, which is monitored by the Stara Zagora District Prosecutor's Office. The workshop shift supervisor was questioned.

It is still unclear how the explosion happened. Deyanov said it was due to a violation of technological rules related to labor safety. The shift started at 7.40 a.m. and an investigation is pending as to which rules were broken.

"It is probably a human error, because this is a risky production and if all the technological requirements were met, this would not have happened," said the district prosecutor Dicho Atanasov.

He added that the investigation will be conducted by the National Investigation Service. Actions have been taken to notify the next of kin. The people are from Kazanlak and its surroundings. At this stage, it is not clear what seniority they have.

The appellate prosecutor specified that products related to sound and light effects were produced in the workshop. It is not a question of substances for combat purposes, but rather of the fireworks kind.

There were broken windows on the neighboring buildings during the explosion. At "Arsenal" there are currently no grounds for stopping the work, the district prosecutor was categorical.

Two fire brigade teams immediately responded to the scene. There was an ignition with detonation. There was no fire like combustion, the fire department said, but they confirmed that there is still a danger for the subsequent actions because there is finished product in crates

The Minister of Economy Nikola Stoyanov also commented on the case.

"I managed to get on the phone with the owner of Arsenal, we have offered all the help that the ministry can offer. It is too early to talk about the causes, at the moment all efforts are aimed at dealing with the consequences."