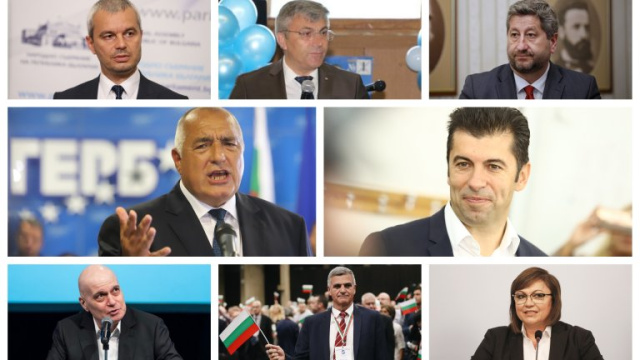 "The processing of election papers continues. The final results of the vote are expected to be announced by Thursday", according to Associate Professor Tsvetozar Tomov from the CEC. Then the exact voter turnout will become clear.

The Central Electoral Commission (CEC) has published the final data from the counting of votes from yesterday's early parliamentary elections. At 100% processed protocols, the difference of about 5 percentage points between the top two political forces is preserved. GERB is with 25.33%, and "We Continue the Change" - with 20.20%. DPS is the third political force with 13.56%.

"There Is Such a People" remains below the barrier to enter the National Assembly, after collecting 3.83% of the vote. 87,634 people voted "I do not support anyone".

Allocation of seats in the 48th National Assembly:

Movement for Rights and Freedoms (DPS): 36

"Vazrazhdane" doubled its votes compared to the November 14, 2021 election, while the former ruling party, "We Continue the Change", lost a quarter of the support it received then.

With "There Is Such a People", the drop is about 60 percent of the vote for the party in November. GERB, DPS and "Democratic Bulgaria" are growing, although not drastically, while BSP continues the trend of shrinking its support.

175,338 Bulgarian citizens voted abroad. "We Continue the Change" and "Democratic Bulgaria" lost their electoral positions among Bulgarians abroad at the expense of the pro-Russian formation "Vazrazhdane", which added more than 10 thousand votes to its result from November.

“From the data so far, it is clear that a little over 2.5 million people voted. These data will change a little more, but I can already safely say that these are the parliamentary elections with the lowest voter turnout of all those held since 1990,” said Associate Professor Tomov.

If NSI had announced the census data earlier, it would have affected the distribution of mandates in electoral districts, commented Tsvetozar Tomov.

The National Statistics Institute announced the results of the latest population census today. Therefore, the data from the previous NSI census were used for the distribution of mandates in the past elections.

“Now that there are new data on the number of the population, it will probably be necessary for the CEC to review the allocation of mandates before the next elections”, Tomov also commented.

In the metropolitan 25 MIR, where there was one of the leadership battles, GERB - with leader of the list Boyko Borissov, collected 28.35%, and "We Continue the Change", led by Hristo Petrov, received 24.36% of the votes.

"Vazrazhdane", whose list was led by Kostadin Kostadinov, collected 11.67% of the votes. 11.30% voted for DB, led by Vladislav Panev. BSP, led by Kornelia Ninova, follows with 8.43%. "Bulgarian Rise", led by Georgi Shamandov, collected 4.92% of the vote.

The election results do not provide an answer to the question of whether it is possible to form a regular government in the 48th National Assembly.

GERB leader Boyko Borissov has not yet made an official statement after the GERB-SDS coalition won the most votes and will be the first to be tasked with forming a new cabinet.

This morning to BNT, Kiril Petkov stated that he will refuse an invitation from GERB for coalition negotiations, but it is not clear whether, if the first term is unsuccessful, "We Continue the Change" will try to form a cabinet with the second term.

"We will not form a coalition with GERB and DPS, we are consistent. The first political force bears a great responsibility. We refuse to negotiate with GERB," he said.

"We can talk with all those who are responsible for solving the problems of the people and overcoming the crises in the country in search of different formulas for forming a stable majority in the National Assembly and a stable government".

The "Vazrazhdane" party, which took the fourth place in the result, will not join any coalition, party leader Kostadin Kostadinov told BNR:

"Our voters don't want that! Everyone else wants Bulgaria to be gone. They are working for it actively and successfully".

The first official statement of BSP leader Kornelia Ninova is expected in the afternoon. Until now, no one from the leadership has spoken after the party remained fifth in the results.

"Democratic Bulgaria" stated that they will wait for the final results before commenting on the merits of the elections. On Facebook, the co-chairman of the coalition, Hristo Ivanov, said that an even more fragmented parliament is looming and it's time:

"For all of us to pay the price for the political short-sightedness that pushed our country to elections and missed the opportunity for a timely unification of the parties of change".

The "Bulgarian Rise" party, which will be represented in the parliament for the first time, would become part of a coalition, its leader Stefan Yanev said, without specifying desired partners:

"I hope we will be part of a coalition that will give solutions and not deal with harsh words and insults to others".

“There Is Such a People”, which currently remains below the four percent barrier, have not made any official statements so far.